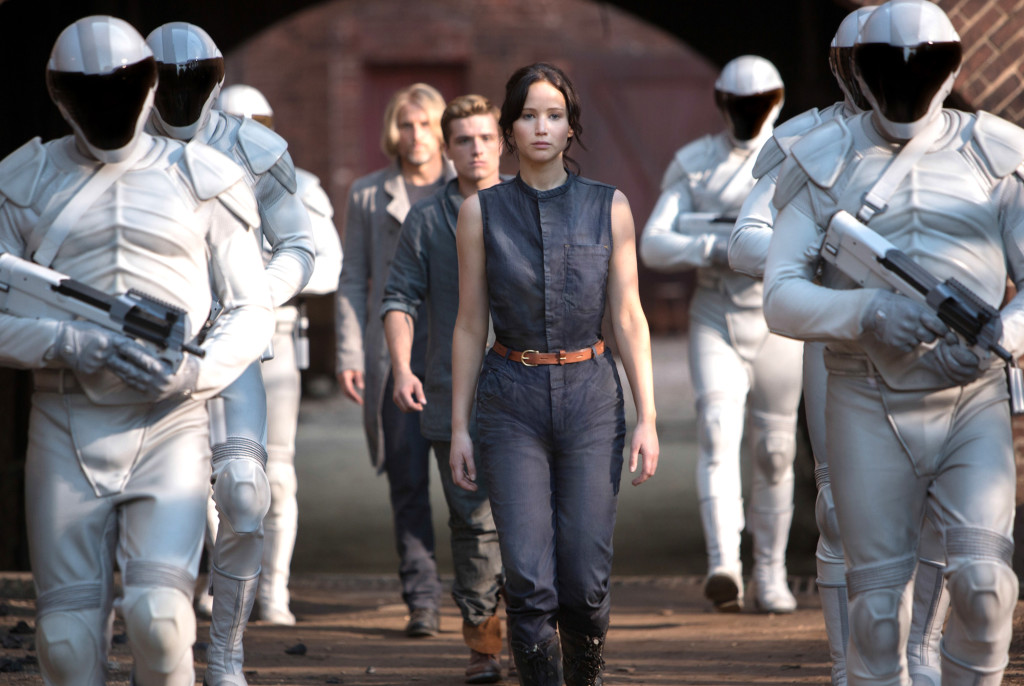 This film is proof that movies are being split for the sake of profit as opposed to story. Don’t get me wrong, “The Hunger Games: Mockingjay – Part 1” is not a bad movie. It’s well-acted, well-shot and never had me laugh in derision (if a movie ever gets me to do that, it’s a sign that the film’s a stinker). It has some standout sequences that were extremely impressive on an emotional level. However, in addition to minimal action, the film still suffers from the same problem as the last two movies: the main characters.

I’ll address the main character’s issues first. Jennifer Lawrence is an amazing actress. She deserved her Oscar for “Silver Linings Playbook” and made me laugh in “American Hustle.” But her performance as Katniss Everdeen has always left more to be desired. It’s not bad; it just doesn’t stand out. Katniss has two emotions: bored and anxious. She looks like she’s in the middle of a Greek Mythology lecture unless Peeta happens to be in trouble.

And I have never been able to sympathize with Katniss, because she is motivated by her love for a boy to save Panem from the Capitol and not much else. I’ll give credit to the film for acknowledging when President Coin expresses her dissatisfaction with Katniss’s belligerent attitude, although it would have been better if, when Katniss told Coin to find another symbol of rebellion, Coin turned to Plutarch and said, “Welp, never mind then. Send in the next angsty teenager!”

And fulfilling the yang side of this hormone-driven story, Peeta still manages to come across as having the personality of a block of supermarket cheese: stale and uninteresting. I give credit to Josh Hutcherson for his subdued performance; the trauma that his character goes through is believable. But that doesn’t excuse the fact that he still has little to no personality to his name. Katniss probably should have gone for Gale.  He’s equally bland, but at least he’s bad-ass.

Now that I’ve criticized the characters enough, like I do every time I review a “Hunger Games” movie, how were the action scenes? Well, mercifully brief. And to be honest, they were all the same: Capitol stormtroopers come in, slaughter some people and the people win through various flashy means. It looks cool, but it just serves as a reminder that we have to wait another year for the good stuff.

I appreciated that this movie did not shy away from showing the brutal atrocities of the Capitol. The sight of charred corpses amongst the ruins of District 12 was brutal and effective in showing how callous a government the Capitol is. It felt like something out of a Holocaust film.

The bunker sequence added a palpable sense of urgency to the movie. The frantic evacuation, the constant, booming sounds of the bombs hitting the surface and the ominous cracks that appear in the ceiling of District 13’s bunker brought together a scene that was extremely effective in conveying the distress and terror that District 13 was subjected to. Also, the sequence allowed Coin to show off her keen intellect and intuition, which is a relief, because otherwise she is not very interesting either.

What I appreciated most was that the movie added a scene you heard about, but never got to read in the book: the mission to rescue the tributes held captive in the Capitol. It’s a very tense section, reminiscent of the final half hour of “Zero Dark Thirty.” I loved how Katniss talked with President Snow as the raid was happening in an attempt to stall for time, and loved it even more when Snow revealed during their conversation how much of a sadistic, diabolical genius he is. Like most of the other characters, Snow is not complex, but at least he is unnerving.

To sum it up, I’d say wait for this movie to come out on Netflix unless you’re a die-hard fan of the franchise. Katniss and Peeta still aren’t compelling enough characters to carry the film, the “action” scenes are too few and too short and the number of standout scenes you’ll remember is a mere three. There was not enough story here to justify this being the first of a two-part film.

the fact is katniss is a boring character, and jennifer had to act miserably to perfect it . Thats is exactly what is required from katniss, bored and anxious among other things.And jennifer delivered it beautifully. I hope u have read the books before commenting on jennifers portrayal of katniss

Yes, I have read the books. And I do not think Katniss was written as boring; she has goals, flaws, skills, and desires. But Jennifer’s portrayal of the character has only two emotions, and that’s not particularly fun to watch.

When is it out on Netflix ??

It’ll probably end up on Netflix right before Part 2 comes out.

I disagree. what you call boring I call smoldering anger. The actress pulls it off. Anger and pain are the only two emotions she would have it in her situation. She tells Gail she can have no other emotion until the people she loves it safe. I think this actress does a beautiful job

The fact that this person who made this thinks Katniss is a “boring and anxious” person isn’t true. Her character is NOT boring, she’s more of a scared, anxious, action-filled and skilled person…of course I’m a super-fan of every single movie and book of the hunger games, even though I haven’t read Mockingjay part 1, the mood is much likely more better than the book but that’s an opinion. Whoever made this probably is judging these awesome characters because he/she is jealous, hates everything, or hasn’t seen these movies or read the books. Not to be rude or judging, but…whoever… Read more »

I always think to myself “Hoo boy, this ought to be good,” any time I see that a new comment has been posted for this review. And apparently, I’m justified in thinking that. First of all, this is a review, which means this is my OPINION. This is not meant to be a definitive analysis of the film; I am saying what I personally thought of the movie. And what I honestly thought was that it’s the worst Hunger Games movie thus far, but that doesn’t necessarily mean it’s crap. It has good moments and bad moments. My saying that… Read more »

No offense, but I feel you have it all wrong. Like previous comments, Katniss is not bored and anxious. The last time she was legit anxious was when she saw Cenna(the designer for her) get killed in front of her right before the third quarter quell started. In this film, she shows anger, pride, and leadership. She has no feelings for the capitol anymore, and wants to kill them just as much as they do to her people. When she says “If we burn, you burn with us!” In the film/book, she is none anxious. She also isn’t bored. HOW,… Read more »