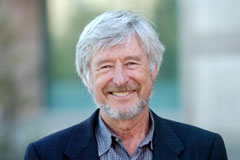 Director of the California Institute for Quantitative Biosciences (QB3) Regis Kelly was appointed as special advisor on innovation and entrepreneurship for the UC Office of the President (UCOP) by UC President Janet Napolitano on Monday.

Kelly’s goal as special advisor is to create an alternative revenue source for the UC system in collaboration with UC faculty members and students. Previously serving as Executive Vice Chancellor at UC San Francisco, as director of QB3 Kelly is heads one of four California Institutes for Science and Innovation, which were created by the state legislature to support academia in technology-based industries.

Director of Communications and Marketing at QB3 Kaspar Mossman said Napolitano chose Kelly because she was drawn to the entrepreneurial work conducted at QB3.
“We developed a bunch of ways to help people in biotechnology start companies out of the University,” Mossman said. “We’ve been relatively successful with this. Janet Napolitano noticed that and decided that she wanted to get some advice on how this might be applied elsewhere.”

Mossman said one of QB3’s most successful projects in entrepreneurial support is the Startup in a Box program, which is designed to aid graduate students in creating companies.

“If you sign up for the program, it’s only a couple hundred dollars, we tell you how to start a company, and put you in touch with really high-end law firms, who will help you do it for free,” Mossman said. “I wish it had been around when I was a grad student.”

According to Kelly, most of America’s wealth and creativity is generated by small businesses, and fostering the growth of start-up companies is a rational way to give back to society. Kelly also said that while UCSF’s mission promotes research, education and public service, the public service aspect is often overlooked.

Kelly said UC staff and faculty members should place more emphasis on giving back to the UC system.

“When I was executive vice chancellor of UCSF, one of the things that I became very aware of is my faculty — including myself — were much more used to getting than to giving. They were always saying, ‘Can you get money from this philanthropist, this government organization,’” Kelly said. “And, you know, if you want to get, you really have to give. When you asked our faculty, ‘What are you giving back in order to get this money?’ there was often a silence.”

UCOP’s Chief Investment Officer Jagdeep Singh Bachher met with Kelly yesterday to discuss his role in collaboration with UC Ventures, a fund of $250 million that will be invested in the entrepreneurial endeavors of UC campuses and research facilities. According to Kelly, cultivating an entrepreneurial spirit in students is an essential practice that has fallen by the wayside at the UC.

“I think, particularly when you get to the graduate student level, there’s a tendency among academics to think they’re training their students to be fellow academics,” Kelly said. “And that is too narrow, I think that’s an inappropriate academic strategy.”

Kelly said that encouraging creativity in students could have positive benefits for the UC, both academically and financially.

“What we really want to produce in the University of California is not so much the foot soldiers to work in the labs and do the standard science, we also want them to try to be creators, to be innovators,” Kelly said. “We want to enable those people who come through to be successful, to bring money into the state and to create jobs for people.”

Kelly also said he will be visiting all UC campuses throughout December to speak with faculty members and gather information as well as form ideas on what the appropriate function of his position will be.

“I’m very serious about this: I have ideas about where I would like to see this office go, but I also know my colleagues very well, and if I don’t listen to them, listen to their best ideas and learn from them, I’m going to fall flat on my face,” Kelly said. “What I want to do before telling anybody what I want to do is go listen for a little while.”

Napolitano said she looks forward to Kelly’s future involvement with the entrepreneurial research efforts of UC faculty and student members.

“I am thrilled that Regis is now part of our system wide efforts to better capture the economic value UC students and faculty create through their pioneering research,” Napolitano said. “The University of California is the best public research university in the world.”

A version of this story appeared on page 7 of the Thursday, December 4, 2014 print edition of the Daily Nexus.