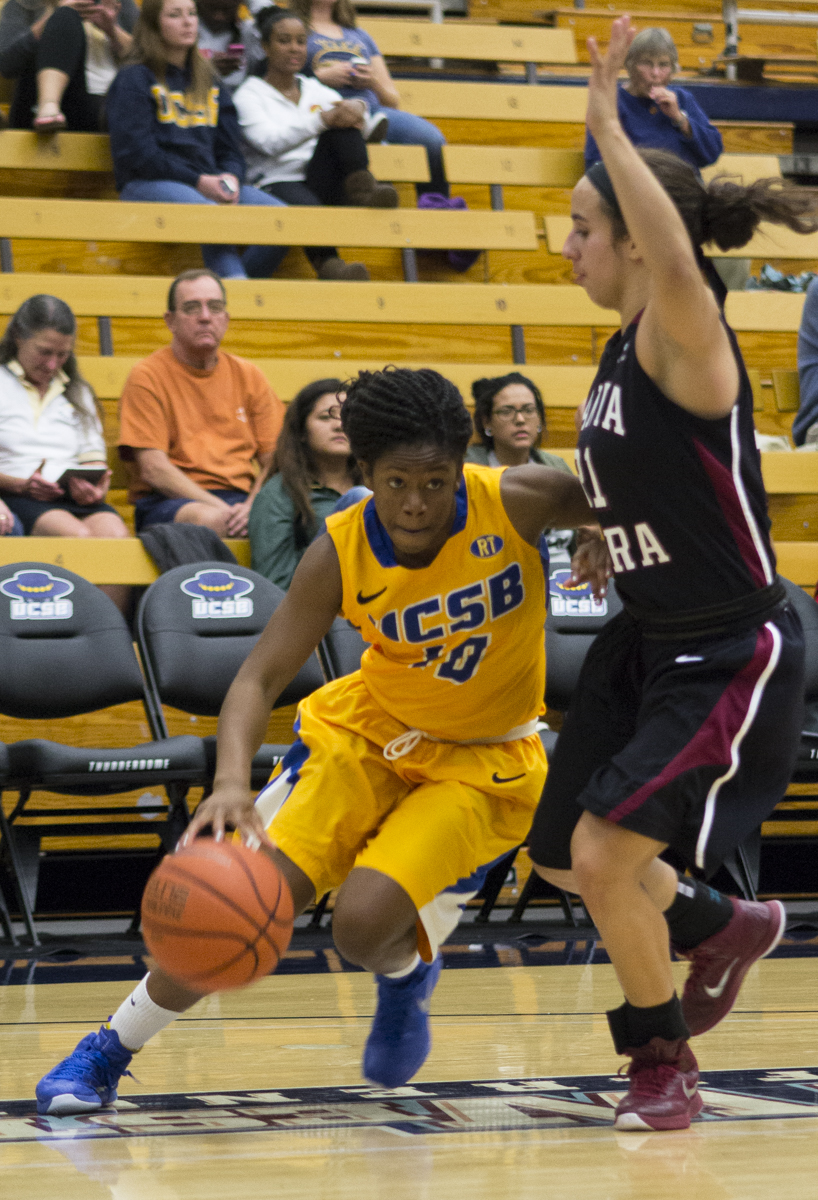 Still in search of its first win of the season, the UCSB women’s basketball team hosts Washington State today before heading out to play at San Diego State on Sunday.

The Gauchos have gotten off to a poor start by dropping their first six games to open the year. Washington is off to a solid 5-2 start while San Diego has opened at 2-4.

“These are two good teams we’re about to play,” senior center Clair Watkins said. “We’re just kind of looking to get that first win and it’s all going to be better from there. Both teams are solid and aggressive teams, and either would be a nice win for us.”

The story of the season for UCSB has been its poor shooting, as it has failed to shoot above 30 percent in five out of six games. It is shooting just 26 percent from the field and 18.2 percent on three-pointers.

Offensively, the Gauchos are led by sophomore point guard Onome Jemerigbe and senior center Clair Watkins with averages of eight and seven points per game, respectively. On the defensive end, UCSB has performed well enough to keep itself in games, but it has struggled to stop the three ball, allowing opposing teams to shoot 36.1 percent on the year.

“We’ve still got a lot to work on, but as bad as I think our defense is, it’s still probably the thing that is allowing me to feel good,” Head Coach Carlene Mitchell said. “There’s nothing wrong with any of our players’ shots, but it’s also part of their responsibility to step up and make the plays and not let the outside elements affect what they do.”

One of the bright spots for the Gauchos so far has been the shooting of freshman guard Makala Roper. Her 37.9 percent shooting from three-point range is higher than any of her teammates’ field goal percentages (minimum two shots).

The first challenge of the weekend for Santa Barbara will be its second-straight home game against Washington St., a team that has scored less than 70 points in just two out of its seven games.

The Cougars possess a high-powered offense that could spell trouble for the Gauchos, who have averaged just 42.8 points per game as a team. The Cougars are also coming off a 70-64 win against No. 15 Maryland, which was their highest-ranked victory in program history.

“Washington State is a tough team. They’re battle-tested,” Mitchell said. “At this point in the season for us, it’s more about asking what we need to do. We need to continue to do the small things to hopefully give us a chance to keep the game close, and after that, anything can happen.”

Playing at San Diego St. this Sunday, UCSB will have a more favorable matchup.

The Aztecs run their offense through freshman point guard McKynzie Fort, who leads her team with 10.5 points per game on 44.9 percent from the field. The Gauchos’ poor three-point defense will have to look to contain redshirt junior point guard Ahjalee Harvey, who’s shooting 56.3 percent on the year from downtown.

Employing a full-court defense that has suited UCSB well at times this year could be beneficial against the Aztecs as they average 25.2 turnovers a game, nearly 10 more than they force.

“If anyone would’ve told me we would start off 0-6 I would say never,” Mitchell said. “But I think we have the elements in place. There’s a lot of basketball yet to play and that’s what we have to realize to continue to get better.”

Today’s tipoff against Washington State is set for 4:00 p.m. at the Thunderdome. Sunday’s game against San Diego State will begin at 2:00 p.m. at Viejas Arena.

A version of this article appeared on page 9 of December 4, 2014’s print edition of the Daily Nexus.