The Daily Nexus
Music
Better at a Festival: Sound Tribe Sector 9 Didn’t Deliver the Goods at the Wiltern
December 2, 2014 at 12:00 am by Adam De Gree 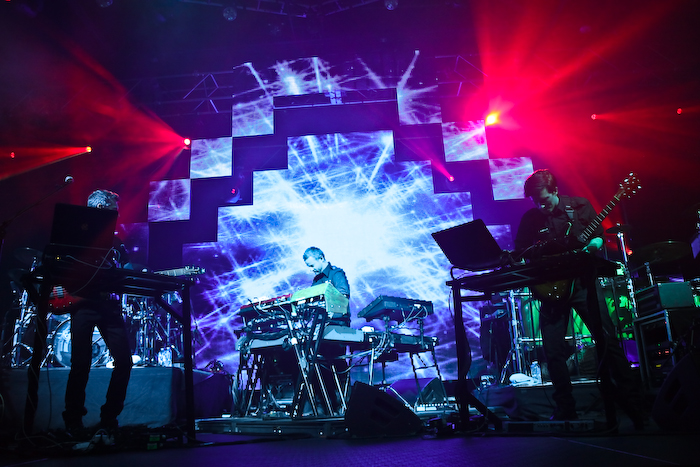 I’m a latecomer with jam bands, never having listened to the Dead or Phish as a kid. However, I’ve seen my share of funky goodness while traveling around from festival to festival over the last few years and Sound Tribe Sector 9 sits pretty close to the top of the pyramid — at least, on a good night. Last week’s show at the Wiltern Theater in Los Angeles fell just short of my hopes, as their set was heavily structured and lacked the free-floating jams that really allow these talented musicians to shine.

The Wiltern Theater is one of my favorite venues. Beautiful ceilings, tiered floors and an impeccable sound system combine to provide the perfect setting for all sorts of madness. I arrived around 9 p.m., just in time to get a wristband for pit entry (released on a first-come, first-serve basis). Michal Menert, the Polish-born Pretty Lights Music stalwart, was billed as the opener, a role he filled ably. He recently embarked on a big band project, taking the stage with as many as 20 musicians at a time and blending the lines between electronic and organic composition, a balance that STS9 is accustomed to.

At the Wiltern, he took the stage with DJ equipment, treating the crowd to the warm electrofunk that is typical of PLM artists. A powerful performer, Menert swayed back and forth over tracks like “Summer Love,” frantically jamming at MPCs and flawlessly transitioning from jam to jam. He is an all-around class act, performing in a sport coat while delving deep into his own melodies, body swaying in tune with the beat. His set ended at about 9:30 and the time had come for STS9 to begin their first set.

Sound Tribe is one of the best-loved bands I’ve encountered, appealing to fans of both electronic and jam-band genres. They recently replaced their bassist, David Murphy, with Alana Rocklin who simply kills it every time. She opened things up with a dramatic standup bass solo with bandmates quickly joining in. Their first set was, as usual, professionally executed with dramatic builds balanced between brief moments of respite as the genre-crossing blend harkened to everything from funk to disco.

Lights danced across the crowd, providing the perfect accompaniment to music straight from Sector 9. Very few artists are able to open up another sort of space, one where time ceases its rapid flow, but STS9 fits squarely within that category. However, after being treated to Greensky Bluegrass a couple of weeks ago and seeing Tribe at various festivals where a more free-flow approach is fitting, I was not completely blown away. There were a few moments where the music seemed empty — perhaps what I really wanted was a mandolin solo.

After a brief intermission, the band returned for a much heavier and funkier second set, venturing into hip-hop beats before drummer Zach Velmer sped things up, almost entering drum and bass territory for a few minutes. The second half of the performance felt a bit looser than the first half, but the group never quite opened things up.

Maybe I’m just jaded — I’ve been averaging a show a week for nearly two years now, so there would be reason for that. But in all honesty, I think that a group like STS9 belongs outdoors in a grassy field with four hours and a minimally planned set. That’s when they truly bring you to sector 9.