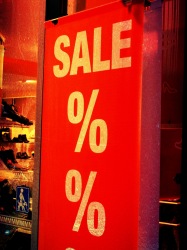 Numerous marketers in the U.S are very good at deceiving customers to maximize the profits of their company. Many sales in the U.S, especially in department stores, are generally deceptive.  When an item goes on sale, it usually means that an item is sold on a company’s standard retail value. In other words, when you buy an item when it is NOT on sale, you are probably paying more than what you should have paid. Unsurprisingly, we see many products on a department store tagged as “on sale” that will never see their “original” price. This is just the tip of the iceberg — marketers have many more tricks up their sleeves.

Why can’t companies simply sell their product honestly? Sadly, this bitter tendency is probably a result of our own shopping and consuming preferences. Before explaining why we are responsible for this tendency in detail, I wish to talk about the story of JC Penney’s “Fair and Square Pricing.”

In early 2012, JC Penney, one of the largest department store chains in the U.S., boldly declared that there would be no more deceptions or tricks. Ron Johnson, the CEO of JC Penney, ensured that they would be straight and honest with their customers. Initially, the company eliminated “sales,” because the products on a sale were being sold at a standard retail price, anyway. Consequently, every item in JC Penney was tagged with its original retail value all year round. Furthermore, they removed deceptive price tags. Originally, every product in the store was labeled with “99c” to create an illusion to convince customers that these items were cheaper than they would seem if rounded up to the next dollar. So, the item which was originally sold as $99.99 was sold as $100 at JC Penny. Finally, the company instituted a very lenient return policy that dictated a customer could return any item to any store on any time as long as the item was intact. This policy was the grand first step to truly connecting the company and customers through transparency and trust. JC Penny decided to never treat its customers like children — every product would be sold to customers with fair and square pricing.

This policy was a massive failure. For the year of 2012 alone, JC Penney lost over one million customers and hundreds of millions of dollars. Moreover, Ron Johnson was fired from JC Penney. JC Penney provided what we wanted: “honesty.” So why did this policy fail so miserably?

JC Penney’s new sales policy seems better for consumers, all around — customers were treated with respect and dealt with honestly. The problem was that customers did not “feel” better as a result.

Unfortunately, the world that we live in is not exactly a suitable place for full transparency between companies and customers to exist. Ideally, every human being would be a rational actor who makes a decisions based on knowledge and wisdom. But, sadly, we often make irrational decisions based on our desires. I mean, think about it: would you buy the 25 dollar pair or the marked down 75 dollar pair?

Alex Cho will be sleeping in the day after Thanksgiving, he isn’t one to wake up at 6 a.m. just to get that 60% off.