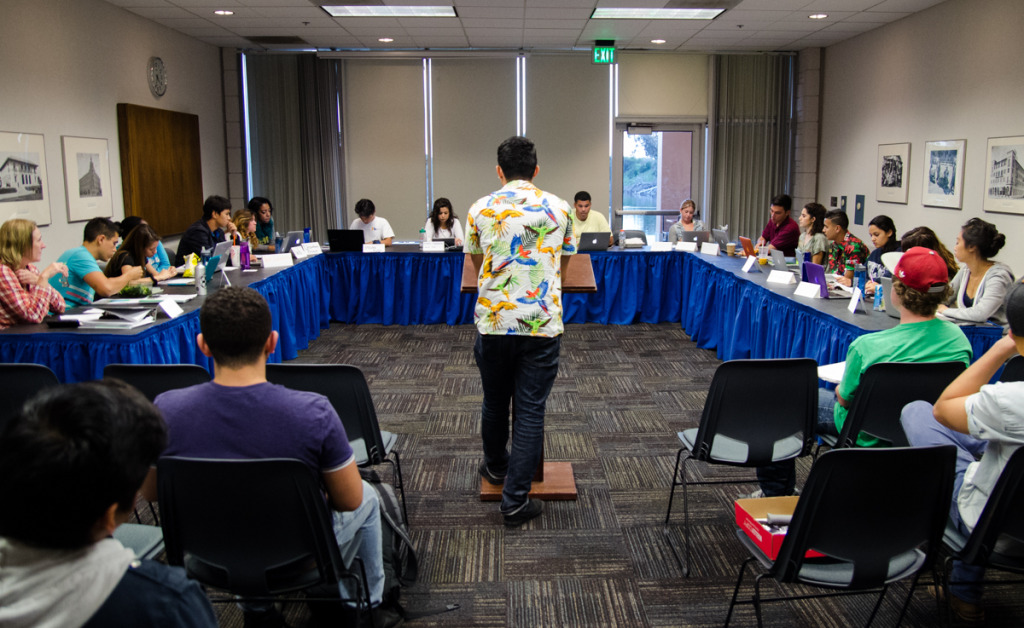 The Associated Students Finance and Business Committee met tonight in the State Street Room at the UCen to hear funding proposals from various student organizations and clubs.

The Lambda Sigma Gamma sorority requested $380 of their existing funding to be re-allocated for the purchase of desserts, water, sashes and a crown for its upcoming “Mr. Greek Universe” event. The event involves male members of various Greek Life organizations competing for the title of Mr. Greek Universe. The event fell under scrutiny by some members of the finance board.

The first objector to the re-allocation of funding for the event came from Senator Steven Kwok who raised the issue of whether or not the planned desserts were in line with A.S. regulations regarding the funding of sustainable food.

“My issue with the desserts is that they are primarily going to spend it on brownies from Costco,” Kwok said. “That does not meet the Green Bill to the best of my knowledge, so I don’t think we should be funding that portion of the re-allocation. Fifty percent of the food that you buy has to be from sustainable sources.”

Senator Nadia Blant said she took issue with the possible exclusivity of the event.

“The only people allowed to compete are Greek so if they’re getting money, that seems unfair,” Blant said. “Is there any way that stipulates that any and all competitions have to be all inclusive?”

Senator Casey Firenze disagreed with Blant and said that if an event is open to all students as spectators, that is enough to qualify it for student funding, regardless of whether or not event participation is inclusive or not.

Blant contended and said that an event that is open is not necessarily open enough.

“In my opinion, just open to attend is not inclusive enough,” said Blant.

Finance Officer Jasmine Moses said she was personally offended by Blant’s suggestion to not fund events primarily targeting a Greek community audience because of her membership in Greek Life organizations.

“The way in which you said [that Mr. Greek Universe should not be funded], it made me feel some type of way because I am in the Greek community,” Moses said.
After discussion, the Board passed a motion granting the re-allocation of $160 for food and desserts, but not for sashes or a crown.

Representatives from the Chinese Students and Scholars Association requested $1,100 to hold a dating game show event in Corwin Pavilion. According to CSSA representatives, the matchmaking event would feature several singles answering questions about their relationship goals in front of an audience and being assigned potential dates.

Finance Officer Kherishma Shah did not approve of the event, questioning its value to the overall student population.

“Personally I don’t see how this event would benefit UCSB in any way possible,” Shah said. It’s pretty much watching people, like, meet, that’s all it is.”
Finance Officer Jerel Constantino supported funding the CSSA’s event and said the Finance committee is responsible for financing events for a diverse range of students with different cultural backgrounds and entertainment preferences.

“We all know this event is catered toward the international community, right? And I don’t know about you guys but my mom is from an East Asian country, this show is familiar to me,” Constantino said. “I think for us to tell [CSSA] this isn’t entertainment, that’s kind of ripping on their culture. It might not be fun for you, but it’s fun for the Chinese students who show up, who are also paying into student fees and who are also part of this community.”
The Finance Board eventually approved $844 in funding for CSSA’s event.

A Community Affairs Board request for $230 in re-allocation for buying toys for children living in Storke Family Housing and $1,850 funding request for toys for local children by the Sigma Chi Omega fraternity also sparked debate among the members of the committee.

Finance Officer Haley Ferrera proposed that both initiatives come with a stipulation that the funding be used for purchasing gender-neutral toys.
Chief Finance Officer and fourth-year sociology major Andre Theus objected on the basis that if the committee required the stipulation, it would be overstepping its bounds as a purely financial organization.

“I’m all down for gender-neutral toys, but I feel like a lot of our personal beliefs on things is kind of getting pushed on these groups and their organizations. Like a male beauty pageant is hella bad in some spaces, they find that very heteronormative,” Theus said. “If we start with one group, I feel like we have to start doing an inclusivity check on all events. That’s a precedent we will have to start following.”

Both CAB and Sigma Chi Omega were granted their requests with a recommendation, but not stipulation, from A.S. asking that funds be used for gender-neutral toys.

Other notable motions passed included $1,970 in funding to the Swing and Ballroom Dancing Club for an event winter quarter, $3,200 to La Familia de Colores for plane tickets to an LGBTQ event in Denver and $3,000 to the Women’s Club Soccer team to help cover expenses related to participating in a national championship tournament in Memphis.