The Daily Nexus
Volleyball
Ali Barbeau: From the Sidelines to the Top of the Stat Sheet
November 13, 2014 at 5:04 am by Sarah Stigers 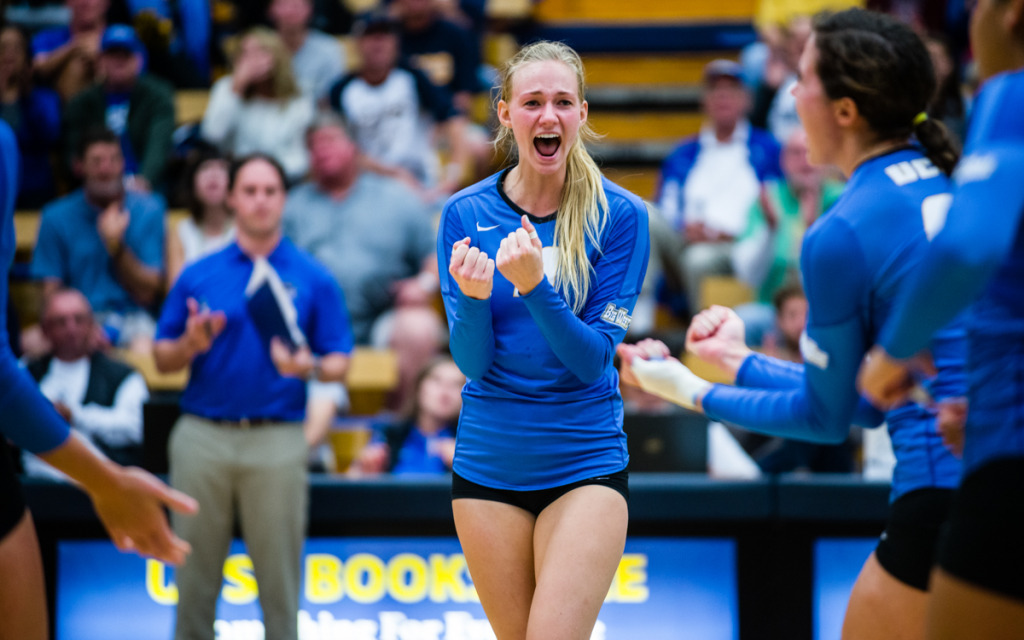 Battling injuries is a test for any athlete’s physical and mental strength. Having your passion ripped away from you for long periods of time from something as mundane as an off-balance fall is a fate none wish to encounter.

Junior outside hitter Ali Barbeau of the UCSB women’s volleyball team is among those to have experienced and beaten one of the most dreaded plagues of knee injuries – the torn ACL – suffering the injury in the last game of her high school volleyball season at Salinas High School.

“It was a tight set. I went up and I hit as hard as I could and landed on one leg. My knee collapsed and I fell,” Barbeau said. “I remember thinking I broke my leg. It was the weirdest feeling ever.”

The reality did not hit Barbeau until several painful experiences and a trip to the doctor’s office, which left her diagnosed with a torn ACL and a 9-12 month recovery time. This also meant that she would be unable to play her senior club season and possibly her freshman year at UCSB.

After a faster-than-expected recovery time, Barbeau was back on the court in six months to make her first appearance for the Gauchos. However, the journey did not end there. The road to recovery was admittedly frustrating for Barbeau and challenged her mentally, but she claims that she never considered giving up.

“I had a rough time coming back my freshman year from my ACL tear. (Former Head Coach) Kathy Gregory expected me to come in and be a starter, and I did too,” Barbeau said. “When that didn’t happen it was really disappointing, and by the end of my freshman season I was pretty frustrated. But during my sophomore season, [Nicole Lantagne Welch] came in and kind of re-lit the hope that I would be a starter.”

Despite limited playing time, she gained confidence as she appeared in 23 matches in her first season, recording 69 kills and 36 digs.

“When I first came back, I was really slow physically and I couldn’t jump very high, so, I struggled especially on defense,” Barbeau said. “There was always the fear that I would tear it again, and on similar plays to when I tore it, I was scared to really go for it.”

Barbeau also suffered a broken finger in her sophomore year, as she recalls that her pinky went crooked after she deflected a kill with her hand in a moment that almost caused her to pass out.

An inspiration to those on her team, her teammate sophomore outside hitter Ali Spindt describes Barbeau to be “a leader on and off the court, and someone who we have come to turn to when we need a kill and a key player.”

During her time at UCSB, Barbeau splits her time as an athlete and as a student, studying biopsychology. In addition to her stellar performances this season, Barbeau played every match for the Gauchos in 2013 and recorded double-digit kills fourteen times on her way to being named to the All-Big West First Team.

“[Barbeau] is a reliant captain that’s always working hard on and off the court,” junior libero Shauna Klein said. “She’s confident and wants the ball at all times during the match. She’s made a huge impact on our team this season.”

Watch Barbeau and the Gauchos take on Hawaii on Nov. 21 at the Thunderdome after her team returns from a two-game road-trip this weekend against Cal State Northridge and Long Beach State.

A version of this article appeared on page 8 of November 13, 2014’s print edition of the Daily Nexus.