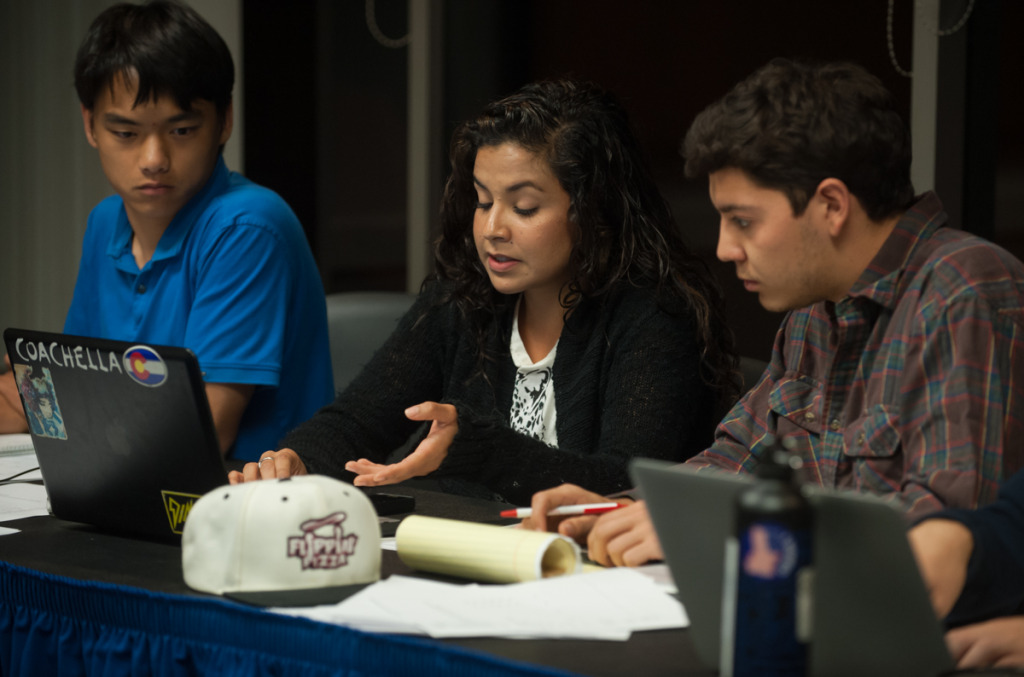 On Monday night, the Associated Students Finance and Business Committee met in the State Street Room at the University Center to listen to requests from 18 old and nine new campus organizations for funding.

Some of the organizations present at the meeting included Mock Trial, Zeta Phi Beta, the Ice Skating Club, the Entrepreneurs Association, the Chinese Students and Scholars Association, UCSB Reads, Laughology, Hermanos Unidos and the Society of Undergraduate Biologists.

UCSB Reads requested $5,000 for the library to fund custom books of Orange is the New Black by Piper Kerman for 781 students, though some claimed the library could find funds elsewhere.

“Nobody in my class read the book,” Senator December Brown said. “I think it would be possible senators have no money for special projects, senate unallocated funds.”

UCSB Reads costs $34,000 to $50,000 annually and A.S. would be listed as a sponsor if they were willing to fund $5,000. There was considerable discussion on whether or not to fully fund the program, primarily because the $5,000 the program requested would constitute a loss of roughly half of unallocated funds, a fund used by the Senate to finance the projects of individual senators. The committee eventually gave the program $1,800 in an 8-1 vote.

“This is a huge program and we’ve won awards,” Peer Advisor for the College of Letters and Sciences Haley Ferrera said. “With Orange is the New Black, everyone is going to want this book this year.”

The Ice Skating Club was in need of $600 for food, lawn rental and speakers for advertising to run an event where students can slide around on blocks of ice. The motion to fully fund the Ice Skating Club’s $600 request passed, with the event scheduled for Nov. 21, from 12 to 4 p.m. on the UCen lawn.

Mock Trial asked for a total of $3,535 and received funding for $3,505, as a result of a limit on funds the committee had remaining.

Zeta Phi Beta requested $300 for an event and received the funding.

“Next Tuesday we are throwing an event for self-identity, awareness; a self-love kind of discussion that we are having,” Zeta Phi Beta officer Mariah Boyd said. “We are having it in the SRB and are expecting 50-100 people. The event is about breaking down the barriers that society has on certain people, on yourself, kind of like wearing a mask.”

Vice President of the Entrepreneurs Association Evan Bender requested $300 for Entrepreneurs at the Table (EATS) to purchase gift cards for three speakers at their event in return for volunteering. EATS allows ten students to sit down with prominent event speakers and hold an open conversation with them.

According to the EA representatives, Technology Management Program (TMP) lecturer Steve Zahm will also be in attendance at the event next week. Some committee members expressed concerns that the event would only benefit those who participate in TMP and that the money could be better spent on other items.

“The only people that have access to this are the people in TMP. I could go but what if I don’t get picked,” committee member Jasmine Moses said. “If you don’t have a business idea then why are you sitting with the CEO? I think it is a really cool idea to be able to meet new people and to be able to talk to them, but I really think it is absurd to think to give $150 to use it at Silvergreens and to chit-chat, like if you really want to chit-chat with them, why are we feeding them? Isn’t the main purpose to talk?”

The committee then passed a motion to not fund the Entrepreneur Association event.

The Chinese Students and Scholars Association (CSSA) is hosting speakers from China to present to eighty students and received $137, after requesting $300.

“Six scholars specialized in mathematics, engineering, computer science, environmental science and technology are invited to attend this event,” a CSSA representative stated. “They will share their ideas on their research and projects and then give students and residents ideas about their major issues and future job advice.”

According to CSSA, the events they hold allow for the dissemination of important information for attending students.

“The information given by scholars is really helpful when our students decide their majors,” the representative stated. “Every scholar will give a speech [of] about 10-15 minutes related to their majors and research and we guarantee residents and students will receive enough time to ask scholars questions related to their studies.”

Laughology, a campus student comedy club, requested $1,585 to fund an event, however the Committee was confused as to how much money they would be allocating to the group and the matter was tabled for a week.

Hermanos Unidos also received no funding after the Committee reviewed the plan for males to attend an event on Nov. 20 with more than 100 students. Hermanos Unidos had already gone to Community Affairs Board’s Take Back the Night for funding and are still waiting for a response from them.

The Society of Undergraduate Biologists (SUB) also requested a $300 funding amount for a future ice cream social occurring this Friday.