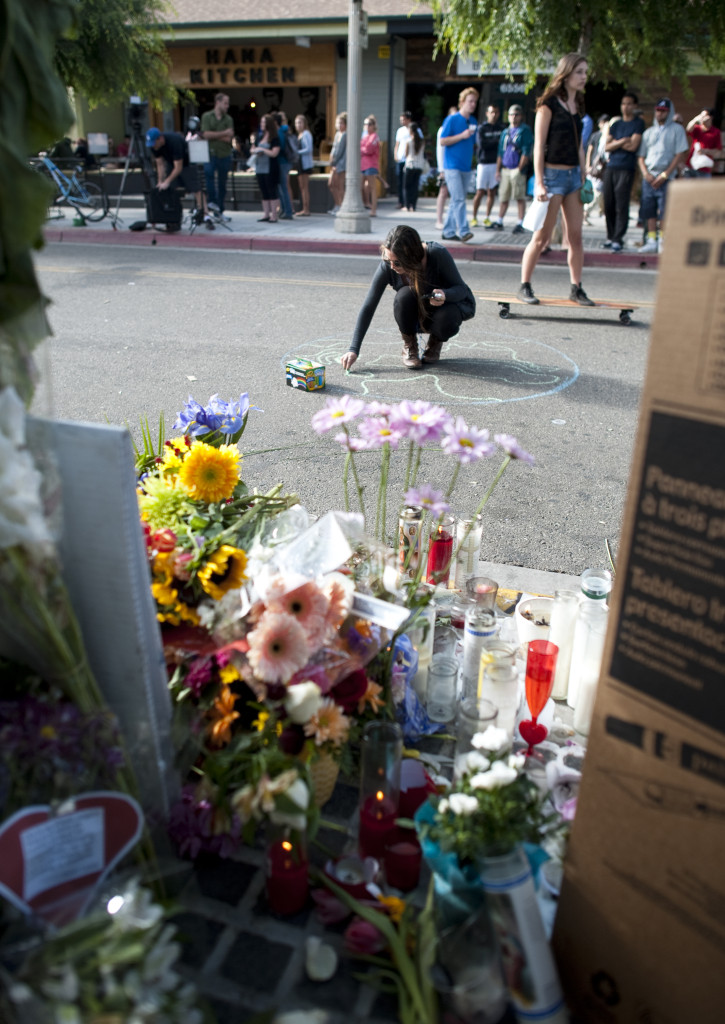 An Isla Vista resident chalks on Pardall Street in front of a makeshift memorial at IV Deli in the wake of the Isla Vista murder spree last May. (Kenneth Song/Daily Nexus File Photo)

The anthology may be in the form of an e-book or a hardcopy, and the coeditors are in the process of finding a publisher. Submissions can be in the form of poetry, fiction, creative nonfiction, articles, essays, visual art, photography, videography, monologues, images or screenshots of text conversations. Submissions can be anonymous or include a credit or title and must be submitted with a completed signed contribution release form to be reviewed for publication in the anthology.

Scarlet said the anthology would cover the positive reactions by the Isla Vista community that occurred in the wake of the killings.

“There were so many amazing things that happened in such a tragic moment, like the paddle-out and the chalk on the sidewalks, and we didn’t let [the tragedy] keep us down,” Scarlet said. “We love how beautiful that was in how we all came together and we wanted to show the world how we reacted.”

According to Scarlet, the anthology will give a platform for the uplifting memories and actions not conveyed through mainstream media coverage of May 23.

“You know watching the media and news, none of that was portrayed,” Scarlet said.

Marquez said she wants the anthology to provide support to others who are still coping with the tragedy.

“As a researcher, I tried to find some guidance from other folks, and there really wasn’t anything like this,” Márquez said. “In a way I want to offer it for anyone in the future, whoever finds themselves in this type of situation.”

According to Lopez, the anthology would function as a collaborative creation to memorialize the victims and serve as an avenue for “people choose to heal and grieve through a creative process.”

“There have been lots of photos created, there was the memorial wall created by A.S. and all of those smaller collective expressions that were really beautiful and powerful and healing for a lot of people,” Lopez said. “I think the thinking is to have a place to put it all together and share it with everybody and sort have a place to go to.”

Lopez said she is primarily expecting local participation for the anthology but is open to outside submissions.

“I think because we are focusing on our local networks in the Santa Barbara and Isla Vista area, that is who we are hoping will contribute,” Lopez said. “They have most of the source materials, photos, spoken word pieces, poetry and what they have already created or what they will create to express themselves.”

According to Márquez, the anthology is for people who want to creatively express themselves or who already have a piece they would like to share.

“This is a callout to some people who want to write something down, to the other people who will already have something that they want to share,” Márquez said.

Márquez said she hopes that when people see the anthology it will engender a positive emotional reaction by demonstrating the diversity of the community’s healing process.

“When someone just randomly picks [the anthology] up, I think it will give anyone who reads it the feeling of hope, the feeling that there are all these multi-faceted ways, that everyone feels differently doing different things and creating community in different ways,” Márquez said.