The Daily Nexus
News
Exploring I.V. Through a Cop’s Eyes During the ‘Fall Offensive’
November 10, 2014 at 5:00 am by Kaitlin Cuskey 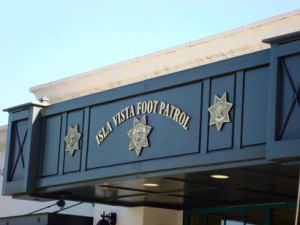 According to IVFP Sergeant Chris Corbin, four squads of officers were sent out from both the IVFP and UCPD and, Friday night, constituted law enforcement’s “Saturation Patrol” in which multiple pairs of officers in squad cars take to the streets of I.V. in a strategy different from the typical ten officers a night.

At approximately 9:15 p.m. the IVFP station held a briefing with the officers on duty, and officers were assigned to walk the streets in squads made up of four officers each. The officers were then assigned a specific street block to patrol.

“It looks slow out there right now but that’s not to say it couldn’t pick up,” Corbin said.

The night did pick up, seeing more revelers than Halloween night the previous weekend. Half an hour later, the squads left the station for their assigned streets, with Corbin’s team of two detective officers and a deputy headed for Del Playa Drive.

Immediately upon rounding the corner of El Embarcadero Rd. onto the 6500 block, the two officers noticed a couple of young men attempting to hurry past the officers without drawing attention to themselves. The two officers stopped the young men and found they were trying to conceal open beer cans.

“If a 21-year-old is carrying a sealed bottle of alcohol, he or she walks down the street with it in plain sight, no problem, but when someone is deliberately acting strange, we know something is going on,” Corbin said.

According to IVFP deputy Justin Durato, the men were instructed to sit down and cross their legs out in front of them to give the officers “a position of advantage for safety purposes.”

“This way it is harder for someone to get up and run away and it is safer for us,” Durato said.

After checking their I.D.s, the young men were consequently issued “Minor in Possession” tickets for being underage with open containers of alcohol. Then, at approximately 10 p.m., the officers received a noise complaint call on the corner of the 6600 block of Del Playa Drive.

According to Corbin, the standard procedure for responding to a noise complaint is to give residents one chance to get the noise under control before issuing a citation.

“If we come back and the music level is still up then we go straight to the complaining party and have them sign a citizen’s arrest, at which point we issue the party a citation and we can take the stereo equipment away as evidence,” Corbin said. “We do our best to handle things at the lowest level of interference out here though.”

The noise complaint process did not go according to plan, however, because of an unconscious female at the residence “that we had to deal with,” Corbin said. The party was then shut down by the deputies. Following another noise complaint at a residence across the street, the squad continued down Del Playa.

According to Durato, I.V. residents generally assume the deputies are not approachable, when he said the opposite is actually true.

“A lot of people think we’re unapproachable, but that couldn’t be farther from the truth,” Durato said. “We don’t mind talking to people and I seem to be experiencing more and more positive, meaningful conversations while I’m out patrolling Isla Vista.”

The officers explained that the beginning of the school year constitutes what they call “Fall Offensive,” a no-tolerance policy for alcohol and other offenses in order to set the tone for the rest of the year.

Santa Barbara County Sheriff’s Department detective Mike Scherbarth said this effort primarily targets new students who may not know what is acceptable when going out into I.V. for the first time.

“[The Fall Offensive] is aimed at the new students and residents who are away from home for the first time and have this sort of invincible attitude in regards to what they can do and get away with here,” Scherbarth said. “A big part of our job is educating the public.”

Corbin said the primary method by which deputies “educate” is through the issuance of citations.

“A lot of people who come here for the first time or who are form out of town think that it’s going to be like Vegas here,” Corbin said. “It is our job to point out what is acceptable and what is not acceptable behavior-wise, and during ‘Fall Offensive’ we educate through citations.”

The team continued down the 6600 block of Del Playa Drive, cutting through an alley between houses to head over to Sabado Tarde. Upon arriving, the two officers stopped young men who were drinking in a driveway that connected the two streets of what appeared to be a “closed party.” The officers made the young men empty their drinks.

“If there are three violations outside of a party then said party becomes a nuisance and we have to shut it down,” Corbin said.

The officers discussed with the hosts an ordinance that detailed if three alcohol-related violations occur outside of a party, law enforcement is empowered to shut the party down. The squad continued on to Sabado Tarde, which was quiet compared to Del Playa, then they returned to Del Playa via Camino Del Sur.

Corbin, who was stationed in I.V. over a decade ago and then returned a few years ago, has noticed how the attitudes of the students have shifted over time and how more people have started to take a sincere interest in keeping I.V. a safe and enjoyable place.

“Students, locals rather, have started to take ownership of their town and we’ve started to partner with the population here rather than having such a tense relationship,” Corbin said. “There seems to be more of an understanding of why we’re here — to provide a safe environment for the people. It’s less strenuous than in the past, which is great!”

According to Corbin, a position on the IVFP is “a very sought after position … because it is different than driving and patrolling in a car.”

“It’s the atmosphere and the interaction with the kids,” Corbin said. “It’s challenging because everything is questioned, so it takes extra time and it takes a lot of patience to work out here because we are constantly explaining ourselves. But it’s a positive thing.”