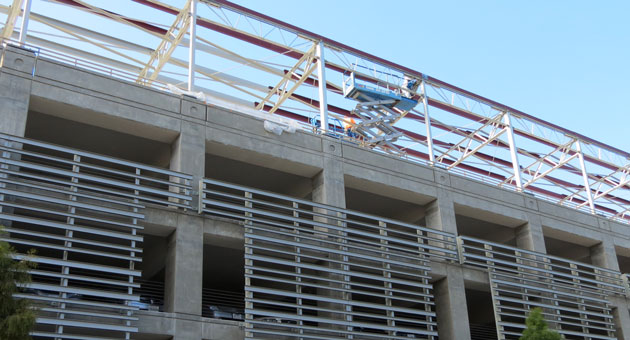 Lot 22, shown here under construction, is now covered by a solar panel system, which will power the Student Resource Building. Photo courtesy of sa.ucsb.edu

The construction of a 424 kW solar energy system built on the upper level of Parking Lot 22, a project funded by student fees, was completed this week.

The system consists of 1,800 solar panels capable of producing 650,000 kilowatt hours annually, which will be enough to power the entire Student Resource Building with 50,000 kilowatt hours left over per year. Funded by students, who voted for the $3.4 million Student Affairs Renewable Energy Initiative to pass in 2011, the solar panel system on Lot 22 is expected to begin supplying power to the university within a few weeks.

Administrative Coordinator for the Renewable Energy Initiative Governance Board Andrew Riley said there were long-term financial advantages to the construction of this solar energy system and that the primary motivator for Student Affairs to get involved with the project was their fixed energy budget.

“Energy prices kept going up and we were approaching that cap in the budget,” Riley said. “We would have to start taking money from Services, effectively, to pay the bill. Whereas once we have solar, we know there’s a payback time and then it’s energy that we’re not really paying for anymore.”

Riley said the use of solar panels is more environmentally friendly and that the continued reliance on non-renewable energy is not justified.

According to LEED program manager Jordan Sager, their office handles the design of systems and the campus energy bills and works with Southern California Edison to obtain permits for projects such as the one on Lot 22. Sager also said a motivating factor behind the construction of the solar panel system has been UC President Janet Napolitano’s Carbon Neutrality Initiative.

“A little less than a year ago, when Janet Napolitano took her role as President of the UC, she announced an initiative that all the UC campuses would be carbon neutral by 2025,” Sager said. “So we’re kind of working towards working out what that means for our campus, and how we’re going to get there.”

Senior Project Manager of the Design and Construction Services George Levinthal said the design of the system had to be reevaluated several times due to unforeseen issues with the module type and the structure of the system. The module type that was initially selected experienced a radical increase in demand, making it impossible to purchase without going way over budget.

Levinthal said the original structure plan had to be redesigned to better accommodate the solar panels.

“There were structural issues, so we went back and determined that the truss system that we have now would work much better structurally for its effect on the building,” Levinthal said. “So we went back and it was redesigned using a truss system to support the panels, and by doing that we ended up with fewer panels and less kW generating capacity than we had originally had in the first design.”

According to Levinthal, Lot 22 is an ideal location for a solar energy system because the parking structure had been built with future plans for solar energy in mind. The concrete columns were strengthened to support the panels, and electrical conduits were run from the basement to the roof as preparation for the prospect of putting solar panels in.

Riley also said student support for the Renewable Energy Initiative referendum, which has charged students $6 in their fees since fall 2010 and will continue to do so until 2020, is largely responsible for the solar panel installation.

“Students thought it was worthwhile, very worthwhile, and voted for it. So that’s where the money’s coming from,” Riley said. “And it’s being augmented with other funds from the Student Resource Building Governance Board and the Student Fee Advisory Committee.”

A version of this story appeared on page 5 of Thursday, November 6, 2014’s print edition of the Daily Nexus.

Informative article and thanks for publishing about this. One correction though: the Renewable Energy Initiative passed in 2010, not 2011. Either way, happy the panels are finally completed.