The Daily Nexus
Sports
Gauchos Fall in Season Finale
November 3, 2014 at 5:01 am by Martin Cobos 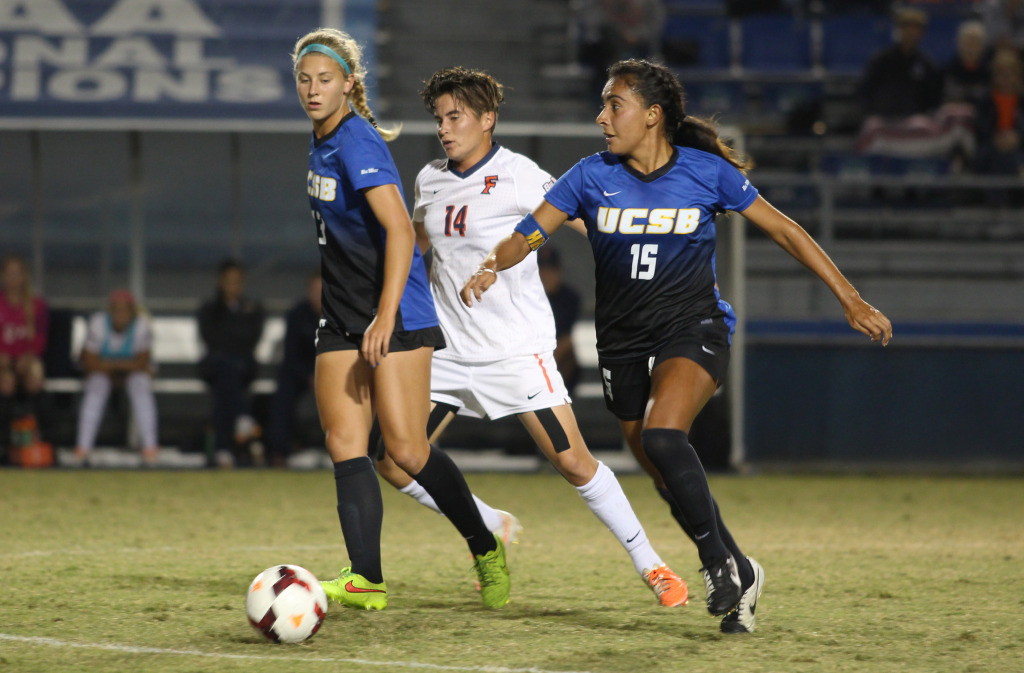 The UCSB women’s soccer team dropped its final game of the season on Thursday as they fell to Cal State Fullerton by a final score of 4-2 at home.

“We’re disappointed and I think the young ladies that played this year deserve better,” Head Coach Paul Stumpf said. “It was especially difficult to say goodbye to this group of graduating seniors.”

The Gauchos finish the season in a tie for last place in the Big West conference standings with a total of six points. After starting conference play 2-2, UCSB finished the season on a four game losing streak.

“We were really great as a team this season and we will continue to improve with time and experience since this is a younger group,” sophomore defender Sydney Fuertes said. “We came into conference strong with four straight wins, but we might have peaked a little early.”

Both teams came out firing as there proved to be no shortage of goals during the Thursday night match. Cal State Fullerton jumped out to an early lead only 15 minutes into the first half after a strike from redshirt-sophomore midfielder Amanda Howard bounced off the crossbar and was rebounded by redshirt-freshman midfielder Connie Caliz, who put away the goal.

The Gauchos would storm back however and score in the 20th minute of play to tie the game at one apiece. A beautifully placed corner kick from senior midfielder Geneve Dromensk found the foot of Fuertes who knocked the ball in the net for her first goal of the season.

Fullerton would score one more time before halftime to take a 2-1 advantage in the 43rd minute of play. A cross from senior midfielder Lauren Stupin dropped in to junior forward Christina Burkenroad who would finish to put the team up at the half.

Following the halftime break, UCSB would score the equalizer in the 55th minute of play. Sophomore midfielder Sara Feder raced down the line to beat a host of Fullerton defenders and put up a cross that found sophomore midfielder Dakota Griggs who struck the ball into the corner of the goal.

Cal State Fullerton would soon take the lead and never look back. In the 64th minute of play, junior defender Morgan Batcheller took a free kick aimed at redshirt-sophomore defender Serena Smith-Banas who was standing right in front of the goal box. Smith-Banas would knock in the game-winning goal.

Fullerton would score one more insurance goal in the 76th minute to firmly put away any hopes for a Gaucho comeback. Burkenroad raced down the middle of the field trailed by a multitude of UCSB defenders and struck the ball into the top left corner of the net.

UCSB outshot Cal State Fullerton 11-3 in the match, however Fullerton held the 5-3 advantage when it came to shots on goal.

Both Fullerton’s redshirt-sophomore goalkeeper Jennifer Stuart and UCSB’s junior goalkeeper Beth Ritter made one save throughout the entire game.

“We played really well throughout the season and got five percent better every week, which is something we had been striving for,” Ritter said. “Some of the scores just didn’t go the way they should’ve and we lost some games that we basically dominated.”