The Daily Nexus
Sports
Crucial Blue-Green Rematch
October 31, 2014 at 5:00 am by Michael Jorgenson 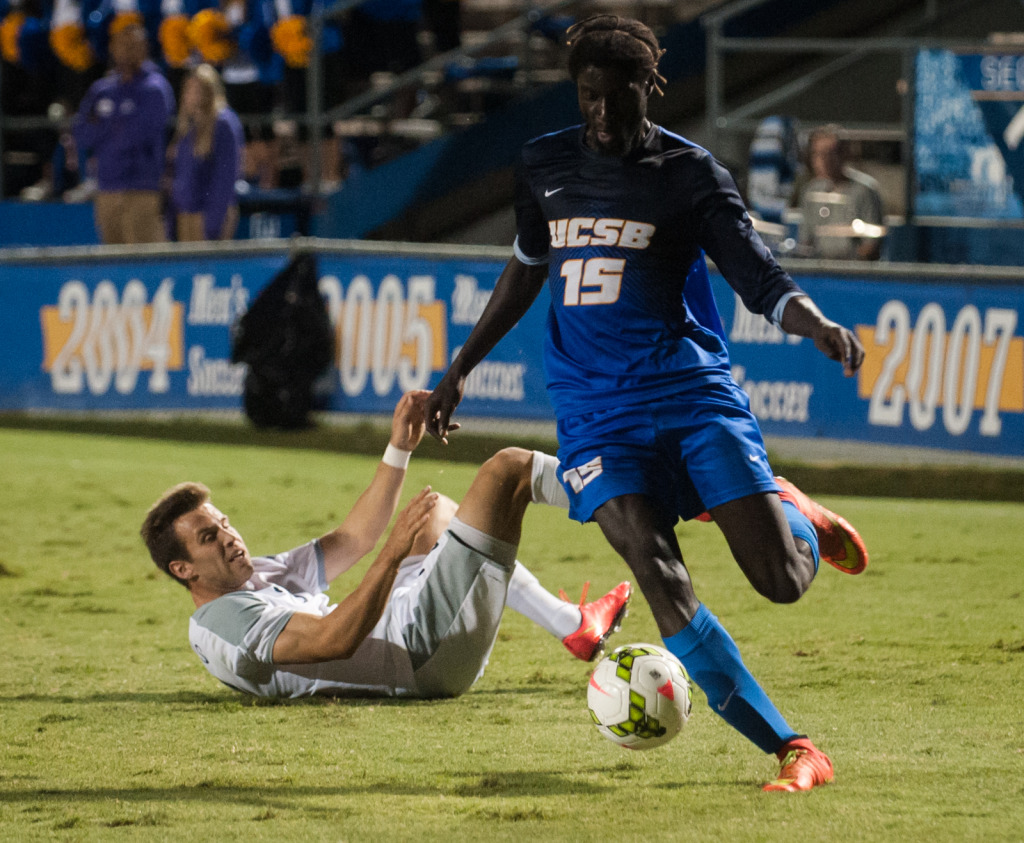 With just two games remaining in the season, the UCSB men’s soccer team travels to Cal Poly this Sunday for a game that will have huge playoff implications for both teams.

Coming off of a huge home win over UC Davis this past Wednesday, the Gauchos find themselves in great shape in the Big West. They are currently tied for first place in the North Division with the Aggies at 6-2-9 overall and 4-2-2 in the conference. The Mustangs will look to bounce back after their current three-game winless streak dropped them to third place in the North at 8-5-4 overall, 3-3-2 Big West.

“Against Cal Poly on Sunday, on that field with 10,000 people in the stands, you have to be really composed,” Head Coach Tim Vom Steeg said. “Nine of our players have never experienced playing at Cal Poly, so we’re going to have to hopefully play like we did [against Davis], put some things together and just find a way to go get ourselves that one road win.”

Things haven’t gone too smoothly for the Gauchos when they’ve played away from Harder Stadium this season, as they have gone 0-1-2 in conference road games this season. If they are going to be able to finish in first place though, they will need to find a way to win at least one of their final two on the road.

“Obviously what’s critical for us is we’re not really good on the road right now,” Vom Steeg said. “We have to now try to figure out how to win on the road and we might as well learn how to do that sooner rather than later.”

The Mustangs, who find themselves in a less than ideal position just one point ahead of Sacramento State for the final playoff spot in the North, will be looking for revenge after they let a 2-0 lead slip away against UCSB last Saturday. After a pair of second-half goals by freshman and sophomore forwards Ludwig Ahl and Nick DePuy tied the game for the Gauchos, a game-winning goal seemed like it could come at any moment.

Despite having three times as many shots as Cal Poly through two overtimes, Santa Barbara failed to find the back of the net for a third time, ending the game in a 2-2 draw.

“We outshot Cal Poly 30-10 in that game, so maybe if we can put a couple of those away and fix a couple of mistakes we can come away with a win,” Vom Steeg said. “The big question mark up there is how we handle the environment. We’ll have to go into the freak show on Sunday and figure out a way to go get something up there, and that’s always an experience.”

A win would certainly strengthen the Gauchos’ chances of getting first place in the division and subsequently winning home-field advantage for the tournament. Having gone undefeated at home in conference play at 4-2-2, one of their top priorities is clearly going to be earning that first seed heading into the postseason.

“Finishing in first place means that we get a couple home games in the Big West Tournament, and that’s our best chance of winning it,” Vom Steeg said. “I like us against anybody here at Harder Stadium, so that’s really what we’re fighting for.”

A vulnerable UCSB defense looked very good against Davis on Wednesday, giving the Gauchos their third shutout of the season despite pushing players up the field for most of the second half and overtime. However, this weekend UCSB will be going up against the top offense in the Big West, which leads the conference in both goals (28) and shooting percentage (.123).

For the Gauchos, their offensive attack will continue to be run through DePuy and sophomore Ismaila Jome down the left wing. DePuy’s team-high of six goals is good for placing fifth in the conference, while Jome’s five assists has him tied with sophomore midfielder and teammate Drew Murphy for first in the Big West.

“It’s a great opportunity for a young team to have to go figure out 16 to 17 games into the season whether or not we can find a way to win on the road,” Vom Steeg said. “I thought we got a great result with our tie at Cal Poly last year, but we’re hoping to obviously go out there and win.”

The game will begin at 5:00 p.m. this Sunday at Alex G. Spanos Stadium.