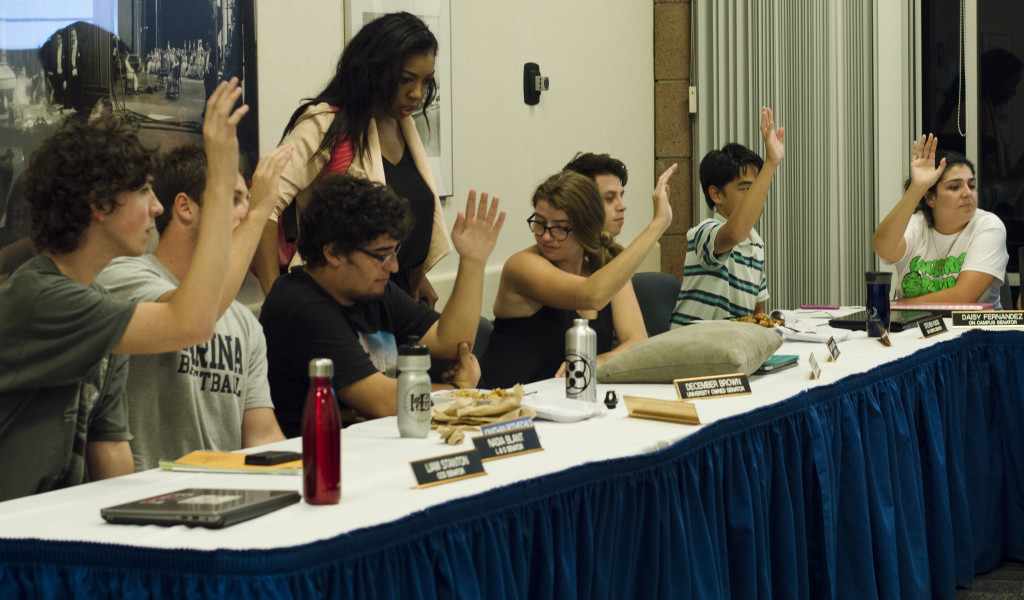 This last Wednesday’s A.S. Senate meeting included debate on a bill that would change the responsibilities of the Student Advocate General, a visit from UCPD’s Lt. Mark Signa and a speaker on the place of art in Isla Vista. Alex Yam/Daily Nexus

The Associated Students Senate met last night in the Flying A room in the UCen to discuss issues including the proposed “Bill to Re-Envision the Office of the Student Advocate General” and heard questions regarding police policies for this upcoming Halloween weekend.

The proposed “Bill to Re-Envision the Office of the Student Advocate General” seeks to create a new advocacy unit to deal with individual students’ needs, a service the SAG currently performs. UCSB Police Department Lt. Mark Signa also answered questions from senators about police policies in I.V. this Halloween, including restrictions on vehicle traffic.

According to fourth-year sociology and psychology double major and A.S. President Ali Guthy, the bill would remove the casework aspects of the work done by SAG.

“The bill is a structural change,” Guthy said. “It has no effect on the SAG’s ability to select their staff, it just removes their casework component.”

Guthy defended the proposal and cited the A.S. Legal Code as a reason for separating the casework and outreach responsibilities of the SAG.

“The constitution does not demand that the SAG perform casework,” Guthy said. “They’re supposed to educate the student body on these resources, and then they’re also doing casework, which is not listed in the constitution.”

Former Student Advocate General and third-year CCS literature major Bailey Loverin, who was elected last Spring and abdicated the position in early September, said that SAG workers’ viewpoints should be considered and discussed as well as the possible issues with forming a new advocacy unit. Loverin said those present lacked any experience in the position of SAG and raised concerns about maintaining confidentiality in the proposed new unit.

The bill will be discussed further in future meetings and a senate vote has not yet been held.

Signa was present at the senate meeting as a representative of the UCPD and discussed police policies for the upcoming Halloween weekend.

A.S. Off-Campus Senator Michelle Moreh asked whether or not identification would be required to enter I.V. this weekend.

“I’ve seen a sign near campus saying you may need to provide proof of residency to be able to come into Isla Vista during a certain time period…” Moreh said.

Signa said no such policies would be in place this weekend. According to Signa, the only areas facing restrictions on vehicle traffic will be the 6500, 6700 and 6800 blocks of Del Playa Drive and Sabado Tarde Road.

Signa also said the police strategy to maintain peace this weekend includes an effort to keep crowds moving to prevent tensions from rising and fights from breaking out.

“The goal is not to go out there and write a lot of tickets. The goal is to keep the streets going and moving back and forth,” Signa said. “When the crowd stops there’s a serious concern there that the crowd will bunch up and when people get really crowded in there, they’ve been tense, they’ve been intoxicated, they get aggressive and fights start breaking out. That’s the same reason we don’t want cars on Del Playa.”

According to Signa, he enjoys working in the community, although certain segments make his job more difficult.

“I love working here, I love Isla Vista, I love the community, I love the university,” Signa said. “The struggle with Isla Vista is you have such a diverse population and I don’t want to point fingers at any group but City College unfortunately has a reputation of having a lot of kids there for partying. If that’s their only goal, it’s hard to change that.”

Professor Kim Yasuda from the art dept. also spoke briefly to the senate about recent public art demonstrations in I.V. and the importance of developing I.V. as an artistic community.

“I really feel like Isla Vista is ripe for a creative incubator where students could engage in projects,” Yasuda said.

Yasuda said I.V. could be made safer not only by increasing security, but also increasing public art. As an example, Yasuda broached the possibility of public lighting in the form of art installations.

“One of the things I want to say is enforcement is certainly important for safety, but there’s also engagement, and I think the arts could bring the engagement piece in partnership with the enforcement piece to bring a really safe environment,” Yasuda said. “Public lighting doesn’t have to be security lights or surveillance cameras; It can be beautiful, magical lighting.”

A.S. Off-Campus Senator Xin Ma was also sworn in at the meeting.