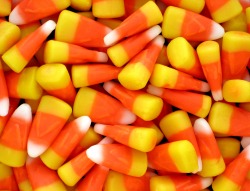 The King of Halloween Candies: Candy Corn. The little yellow, white and orange sweet has been a Halloween favorite for more than a century. Best known for its unique tri-color and creamy taste, this icon among candies is also one of the most hated (Oh, the irony). While George Renniger, an employee of the Wunderlee Candy Company in Philadelphia, invented Candy Corn in the 1880s, the Goelitz Confectionary Company (now known as Jelly Belly) receives credit for its initial sale and production. At its 19th-century start, Candy Corn was called “chicken feed” due to its resemblance to the popular poultry food. Thankfully, this historic confection was renamed because let’s be honest, chicken feed sounds far from appetizing. Believe it or not, the candy originally had no association with Halloween or Thanksgiving. Due to the tedious nature of creating each kernel by hand, Candy Corn became available seasonally.
To this day, Jelly Belly creates candy corn using the original recipe. Spoiler warning! Candy corn begins as a mixture of sugar, corn syrup, fondant, marshmallow crème and vanilla flavor. The mixture is then melted into liquid candy, colored and run through a cornstarch molding process to produce the kernel shape. For all of you candy corn enthusiasts, there is no need to wait for Halloween!  National Candy Corn Day is held every year on Oct. 30.

Fun Fact: Candy corn is made from bottom to the top, meaning that the yellow part is the top and the white tip is the bottom.

Did you know? Candy corn cocktails actually exist. Fanatics of this sweet created a cocktail that can be infused with either vodka or orange liqueur.

This story originally appeared on page 22 of October, 30, 2014’s print edition of the Daily Nexus.