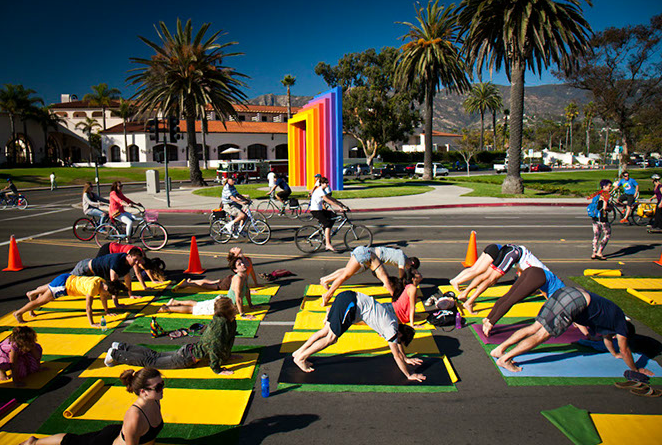 The Coalition for Sustainable Transportation, Global Good Impact and Traffic Solutions put on the second annual Santa Barbara Open Streets this past Saturday, a free community event to promote a healthy and active lifestyle.

More than two miles of East Cabrillo Boulevard in downtown Santa Barbara was closed off and divided into multiple sections, such as Activate, Rock & Skate, Motivate and Jubilate, that each provided different activities and booths. The event is inspired by the ciclovias street festival held annually in Bogota, Colombia to help relieve traffic congestion and celebrate cycling.

SB Open Streets volunteer Diana La Riva said she helped with the pre-planning of the event by calling in more volunteers and handing out flyers, as well as setting up the Donation Station, which accepted donations to help fund the event.

“This is a new idea for this year, The Donation Station, because it takes a lot of money to put on these events,” La Riva said. “So $43,000 from permits to port-a-potties, for equipment rentals, for police…”

According to Matt Turner, co-founder of the Santa Barbara Hustlers, a volunteer team and social club, his organization’s goal is to positively impact members of the Santa Barbara community by getting roughly thirty volunteers to setup and break down parts of the celebration, along with running games.

SB Open Streets volunteer Nancy Arkin and said she was happy to help show off activities to other community members.

“All the different stations and all the different stuff you can do, which is pretty cool to expose people to all of that and just see what the possibilities are in town,” Arkin said. “As a newcomer, [it’s] just a forum to see where all the resources and stuff [that’s] going on in the community.”

According to La Riva, physical activity is a prominent part of living in Santa Barbara, which made the area an attractive place to hold the event.

“Santa Barbara’s a big biking community and people are always outside being active so this is the perfect place for it, to encourage them to come out,” La Riva said. “There’s so many events; we encourage people to be active outdoors and enjoy our beautiful weather and to commune, work together as a community, meet new people, slow down the pace of life a little bit.”

La Riva also said that besides South America, Los Angeles has also been doing their own version of ciclovias, where the streets are closed down and remain open for just bikes and people.

“They’ve got it put together. Once you have one, then you know how to better do it next time,” La Riva said. “It started in other places and so Santa Barbara’s trying to take it on.”