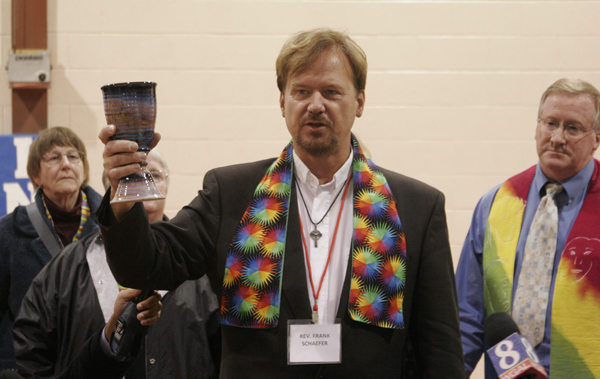 The Rev. Frank Schaefer addresses his ministry after his original hearing in 2013.
Photo Courtesy of Religious News Service.

The United Methodist Church (UMC) Judicial Council announced its ruling yesterday that the UMC appeals court acted correctly in handling the case of the Isla Vista pastor Frank Schaefer, meaning that he will be keeping his reverendship status.

The church originally defrocked Schaefer in 2013 after he presided over his son’s same-sex wedding in 2007. On Wednesday, the UMC’s Judicial Council — the church’s highest court — held a hearing in Memphis, Tennessee, to determine whether or not a lower appeals court acted properly in restoring Schaefer his reverendship status in June of this year. The prosecuting clergy member in Schaefer’s case, the Rev. Christopher Fisher of the Eastern Pennsylvania Conference, brought an appeal to the Council in July, stating, among other reasons, that the lower appeals court “wrongly crafted” its own penalty rather than “remanding” it back to the trial court to determine the penalty.

The Judicial Council’s final decision was announced on its website yesterday morning and states that the church’s Jurisdictional Committee on Appeals operated accordingly in its decision to reverse the lower court’s penalty on Schaefer.

“The Judicial Council … finds there are no errors in the application of the church law and judicial decisions,” the UMC press release stated. “The penalty as modified by the Committee on Appeals stands.”

Schaefer said he is grateful to keep his status as a reverend.

“I feel relieved. For me and my family, it’s a great relief,” Schaefer said. “Today is a very, very good step.”

The Isla Vista pastor said he regards this decision as a major victory not only for himself, but also for the LGBTQ community.

“Justice was not denied today,” Schaefer said. “It feels good because justice has not always been done to the LGBT community.”

Bishop Minerva G. Carcaño of the Los Angeles Episcopal Area said she was pleased with the final decision made by the UMC Judicial Council.

“I rejoice in the decision of the Judicial Council in the case of Rev. Frank Schaefer,” said Carcaño. “I believe it affirms our United Methodist commitment to doing all the good we can in the name of Jesus our Lord.”

Carcaño said she believes the ruling opens the door for Schaefer to further his ministry in I.V.

“Already Rev. Schaefer’s ministry is bearing much good fruit in Southern California,” said Carcano. “The Judicial Council decision now frees him to continue the work of making disciples of Jesus for the transformation of the world.”

According to Schaefer, the ruling will allow him focus more on his ministry at University United Methodist Church.

“Now I will have the opportunity to really devote myself to Isla Vista,” Schaefer said. “I have such a big heart for Isla Vista, and I really want to help to create healthy, good structures and good community.”

The LGBTQ-friendly pastor said he has a message to individuals who feel that the council made the wrong decision.

“Deal with it,” Schaefer said.

Prosecutor Rev. Christopher Fisher was not available for comment.