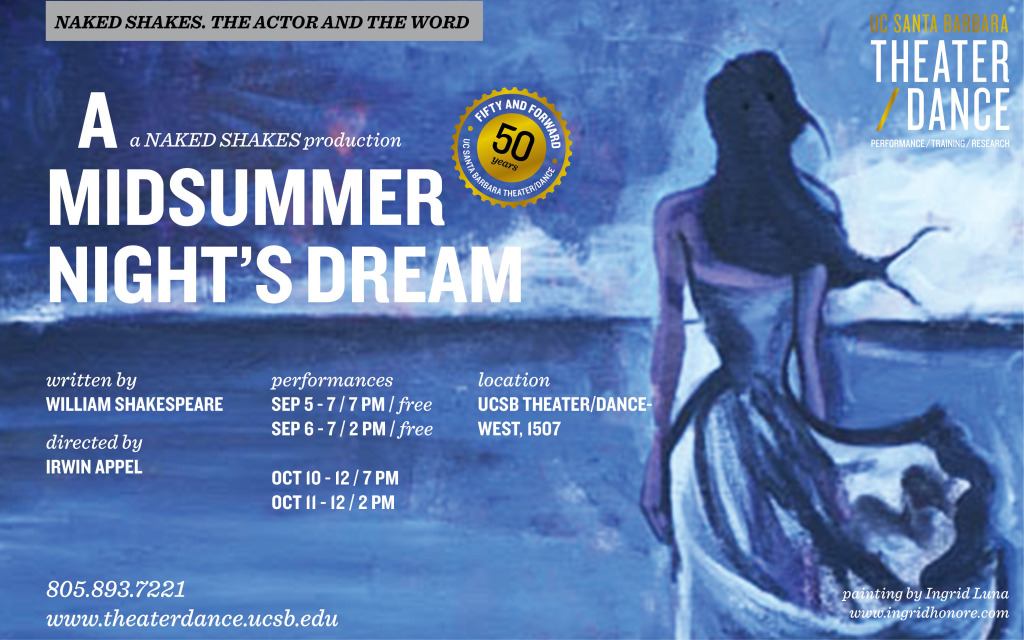 The course of true love never did run smooth, but the course of Naked Shakes’ fall production of “A Midsummer Night’s Dream” certainly did. Naked Shakes, in the words of Director Irwin Appel, is “about the actor and the word. It comes from the principle that an actor in a bare theatrical space, along with great language, a few technical elements and the collective imagination of the audience can create magic and conjure up the true heart and ‘dream’ of ‘A Midsummer Night’s Dream’.”

The show was performed in the Theatre-Dance Movement/Voice studio; with just aerial silks to serve as set pieces, there was nothing to distract the audience from the cast, comprised of mostly students in the BFA Acting Program. Appel chose this venue for the space’s nakedness.

“This choice actually echoes the original Globe Theatre in London where Shakespeare’s plays were performed,” Appel said. “They did not have electricity, and Shakespeare’s great challenge was to transport his audiences to different places, times and worlds through only the words.”

Appel did, however, take advantage of the cast’s many artistic abilities. Rigo Sanchez, a junior in the BFA Acting Program, was cast as Theseus and Oberon, both of whom danced in the course of the performance. “[The dancing] was based on the connection between the characters. Theseus and Hippolyta’s dance in the beginning was about the sexual attraction between them,” Sanchez said. “Titania and Oberon’s dance at the end was about reconciliation … the dances gave the audience insight into the lives of the characters.”

Given that Shakespeare’s colloquial language was vastly different from modern Southern Californian jargon, dance was used as a medium to explore the characters and give the audience a greater level of appreciation for the story. As a tool for acrobatics, the aerial silks enhanced the choreography and created visual patterns as the dancers entwined into the bright red fabric. A definite contrast from the characters dressed in black, the silks transformed the bare set into a visual playground of energy. 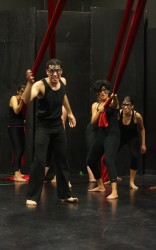 Particularly fascinating was the portrayal of Puck, the mischievous fairy servant of Oberon. Though Puck is a single character, seven different actresses were cast for the role. His character alternated through the girls, and at times all seven Pucks were onstage. Skarlett Redd, a junior in the BFA Acting Program, was one of those cast as Puck.

“Having seven actors portray the one character helped flesh out the many qualities, or personalities, that make Puck capable of all his chaos,” Redd said. “The essence of Robin Goodfellow was found somewhere between an interaction with each other [the seven women] and the audience.” This simultaneously discombobulated and unified presence of the sprite transformed him from an entity into an aura; dispersed, yet still potent.

As effortless as the show turned out, it was not a walk in the park for some to pull off. Truly Polite, a BFA actress cast as Moth and Puck, made her debut in “A Midsummer’s Night Dream.”

“Going into it, I was very nervous and insecure about my ability to keep up with everyone who had so many years of experience on me,” Polite said. Soon enough, she found herself surrounded by supportive people who encouraged her to perform with such apparent confidence that no audience member without a program could have guessed this was a first for her.

Despite her stellar performance, Polite had difficulty boiling down what the overall experience meant for her. “The experience is hard to explain because it’s literally an ‘experience,’ you just have to be present there to understand just how invigorating it is.”

Though Polite had trouble getting the essence of her own experience into words, her director expressed with clarity his conviction of the importance of productions such as this. “Naked Shakes attempts to bring home the notion that there will always be a need for the live actor in front of a live audience with little more than his or her own communicative abilities, along with a great text,” Appel said.

Even with the advancement of technology, the relationship between the actor and the script is still the fundamental basis of dramatic performance. All productions would be something to see had they the same enthusiasm the people who brought to life “A Midsummer Night’s Dream” did.