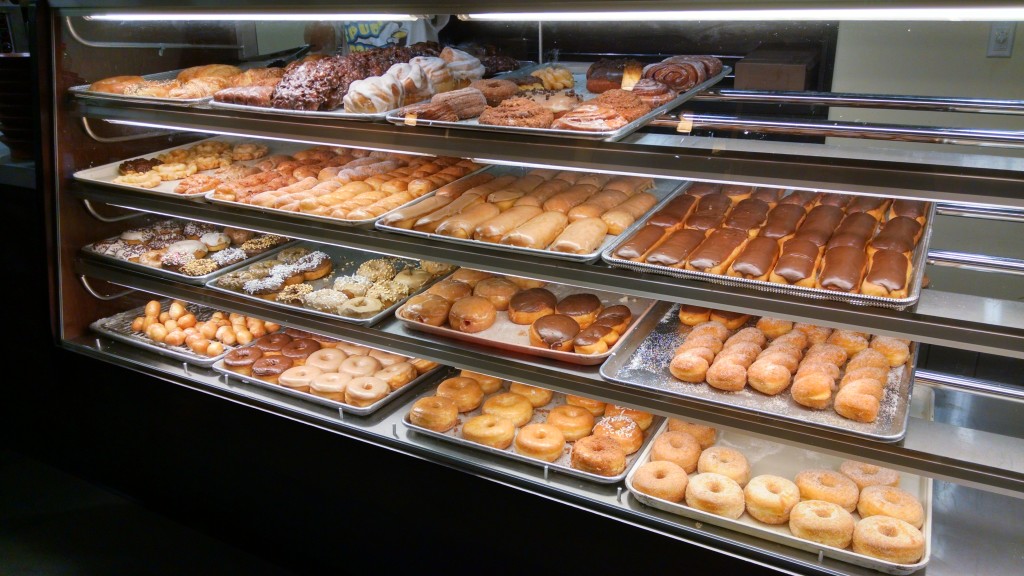 Is there such thing as too many choices? Danielle Watson/Daily Nexus

I’m going to start this by disclosing something: Yelp is basically my best friend. I trust his opinions and I listen to his suggestions of where to go next in my life. We only really started to get to know each other within the past two years, but so far he hasn’t steered me wrong. I’ve really come to believe in him. So when I saw the four-star rating for Spudnuts Donuts, I knew I had to try it out. The fact that the place was in the one dollar sign range on Yelp appealed to my newly-minted college outlook on money, too.

Walking in, it reminded me more of a café than the bright lights of Krispy Kreme that I am much more acquainted with. The doors were wide open and inviting and the store was quiet. It lacked the caffeinated air typical of a good coffee shop, but Spudnuts still had an endearing quality about it. I went around nine o’clock in the evening on a Thursday, so the store was relatively empty.

Simple and well-stocked despite the late hour, the glass display case held all of the donuts and pastries. Spudnuts has potato infused versions of the classic donuts: raised, cake and old-fashioned. Along with the originals, they have a lot of miscellaneous pastries such as croissants, fritters and cinnamon rolls. I won’t bore you with the details of everything in their selection, but I’ll just tell you it was more than I expected. I ordered an original glazed donut, a cinnamon roll and a hot vanilla for my visit. The original glazed wasn’t as fresh as it probably would have been first thing in the morning, but considering almost an entire day had gone by and the donut was only one dollar, it was pretty good. However, their donuts are definitely heavier than the nice airiness you get from a classic Krispy Kreme. This density carried over to their cinnamon rolls as well. The rolls left something to be desired in my opinion. The pastry was more glaze than cake, and it honestly just felt like a thick, bread-type object covered in glaze with cinnamon in between the cracks. Thankfully, the hot vanilla did not disappoint. It was a simple and sweet compliment to the snack.

All in all, Spudnuts is a quick and easy way to get donuts if you’re craving them, or just a good way to satisfy any sweet tooth. They haven’t displaced Krispy Kreme’s spot in my heart (though few things have yet to accomplish that feat). While their donuts have some merit, I don’t think I’ll be trying their cinnamon rolls again anytime soon. As for the place, the atmosphere is nice if you’re looking for a place to study for upcoming midterms. Spudnuts opens at 8 a.m. at the latest every day and closes at midnight at the earliest . Just a short walk from campus, I.V.’s new donut vendor is located on Seville Road.

This is so sexist, how those the author know that Yelp is a Man? Yelp could be a woman, or someone who is gender-queer.