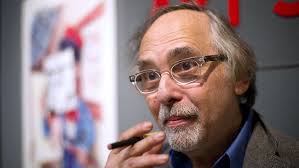 The lights lowered. With hushed voices, the mostly balding, erudite and otherwise hipster-bespectacled crowd leaned towards each other’s eager ears, their eyes rendered inert by the expanding blackness. Other than a podium, six chairs and an expanse of white at the rear, no one knew where to look, where to expect the first movement of the performance.

In the dark I could picture the image of the back-cover flap of Maus, the portrait of the artist in his forever recognizable style. I was eager to rediscover the masked visage: the downturned mouse snout, grey and grizzled resting dejected in human palms with a cigarette hanging loosely from the left hand. On the other hand, I was dying to know what Art Spiegelman, the human behind the guise, actually looked like. 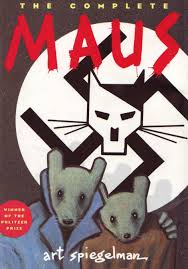 Six musicians, led by jazz composer Philip Johnston, filed out while we waited in hushed silence. After dragging once more on his shiny e-cigarette, the 66-year-old graphic novelist bent forward toward a waiting laptop and exhaled another wispy cloud. The stage’s screen flashed red before presenting a bold, blank speech bubble.

Nonchalantly beginning to chat at the baited audience, Spiegelman launched into a discussion of his medium: comics, or as he preferred to call them, co-mix, with an emphasis on the hyphen. Combining the image and the word, the form on the screen was literally an amalgamation, a mix of communications. In a statement of clarity, Spiegelman finally hinted at what this multimedia show entailed, “I’m hoping you will careen between my words and these picture stories until you’re left as breathlessly unbalanced as I am.”

As the sextet sat as silent as the crowd, I wondered when the hyphen would expand to add sound into the mix. After an expansive history of the comic form, including a snide comment on progenitors rejecting the interests of their offspring, Spiegelman finally proceeded to the bulk of his talk with a presentation of early cartoonist A.B. Frost’s “Our Cat Eats Rat Poison.”

Beginning with a scribbly image of a cat, all seemed tame. But as the frame faded into the next panel, a saxophone screeched to life and the feline rose like a rocket, propelled by an exploding tail of scribbles. My spine leaped into my throat with shock. Johnston’s musicians awoke as the reanimated illustration from the late 19th century flashed across the screen, rolling and pitching in a quick, chaotic jazz canter.

Spiegelman continued from early illustrated panels to the full-blown illustrated novel, exemplified by woodblock printers such asthe expressionistic Frans Masereel and the romantic Lynd Ward. Rather than merely glossing the recently appointed classics such as Masereel’s black and blocky “The City” and Ward’s highly romanticized tale of the tragic artist, “God’s Man,” Spiegelman let the stories unfold with the sometimes sentimental and sometimes hectic accompaniment of Johnston’s composed pieces. Spiegelman switched his lenses from short range to distance so that he too could appreciate the flashing images himself.

After a reeling crash course in the history of the wordless novel interspersed with the comic relief of his own design, Spiegelman finally revealed a serious effort commissioned specifically for WORDLESS!

Presenting a short graphic work in a slideshow, the novelist and artist placed himself within a distinct lineage. Following a chronological history of comics and ending with his own animation, Spiegelman eschewed his acquired title of “the father of the graphic novel.” His colorful and thought-provoking piece, entitled “Shaping Thought,” traced human and animal, lover and fighter. These words were shaped in primary-hued circles, triangles and squares.

Marked by stylistic simplicity and an effortless coupling with Johnston’s skittish and dissonant jazz, Spiegelman’s co-mix forced the audience to reevaluate their relation to meaning. Out of abstraction, he asked us to understand his images as a language of their own and to read the words in the wordless

Cool blog. Thanks for sharing.