The Daily Nexus
News
Publisher Profit Explained
October 23, 2014 at 5:00 am by Emani Oakley 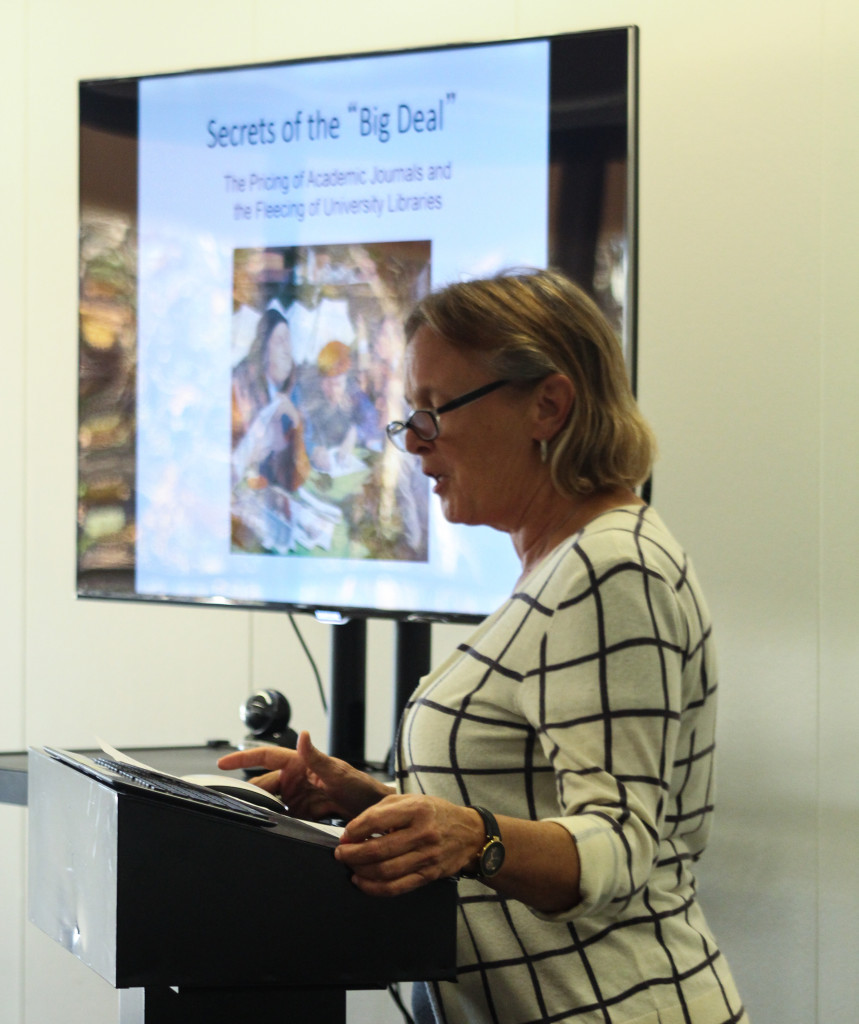 Professor of Economics Ted Bergstrom presented his research regarding price discrimination by journal publishers during his talk on Thursday, revealing that much of the content that comes from academic readers is filled with articles from for-profit publishers.

The presentation was a part of the Davidson Library’s Open Access Week, whose mission is to inform about scholarly communication and publication trends. Bergstrom’s presentation, entitled “Secret of the ‘Big Deal’: The Pricing of Academic Journals and the Fleecing of University Libraries” uncovered the practices of for-profit and nonprofit publishers and weighed the impact such methods have on the library and researchers.

According to Associate University Librarian Janet Martorana, commercial publishers use a journal-pricing model where journals are cheaper when purchased in bundles.

“It’s not unlike cable TV packages where you pay for a lot of channels that you don’t watch,” Mortorana said. “University libraries pay for packaged content regardless of the value or use of each journal titles. Bigger is not always better.”

According to Martorana, before Bergstrom’s study, little was known about how much universities pay for big deal bundles because publishers have insisted that librarians sign confidentiality clauses.

“Ted and his colleagues used the Freedom of Information Act to obtain copies of big deal contracts signed by more than fifty institutions and the results of their research that published in July,” Martorana said. “They suggest that the ‘Big Deal’ is a great deal for publishers but not libraries or academics.”

Martorana also said Bergstrom’s research is a “catalyst for change that will help transform scholarly publishing.”

“The UC libraries are using Ted’s current and past research to vastly improve how we go about evaluating and investing in journals,” Martorana said. “The potential impact on campus authors is significant because it will affect the availability and accessibility of the scholarship needed for teaching and research.”

According to Bergstrom, he began by researching the differences in what publishers were charging libraries and he began to look into other disciplines and thinking about the economics of what was occurring.

“The average subscription price per article for the for-profit was about three times of that of the average subscription price of the nonprofits and this is true across disciplines,” Bergstrom said. “One thing that I didn’t know when I started this was maybe the nonprofits are subsidized so this is not the true cost and prices are higher until the subsidy.”

Bergstrom said publishers argue that research journal’s a la carte prices aren’t really what libraries pay because they get discounts from the big publishers for buying these bundles.

Bergstrom also said after researching that he discovered even with the bundle discounts the publishers’ prices per citation or per article are much higher than the prices of nonprofit publishers.

“Another thing we found out were that there were very striking differences in the amount of money different universities paid for their subscriptions,” Bergstrom said. “We also found evidence that universities that bargain hard have better contracts.”

According to Bergstrom, the unreliable signals and the complexity of choosing an academic journal create room for the publishing industry to become a monopoly, thus increasing price discrimination.

“These are the kind of problems that make demand very inelastic, that is unresponsive to price, and that is just lovely territory for monopolists,” Bergstrom said.

Sherri Barnes, the Scholarly Communication Program Coordinator, said the new model of open access publishers would be more cost-effective and that researchers should take Bergstrom’s findings into consideration when looking to get their work published.

“Something that I’d want our faculty and students who publish to think about is when they’re selecting where to publish … you need to also think about if you want to work for free for a company that is making a huge profit for free,” Barnes said.

According to Barnes, moving to open access publishing should also be a concern for undergraduates because much of the content that comes from their readers is filled with articles from for-profit publishers.

“I think it’s good for undergraduates to know who is producing [academic journals], who is profiting from it, and who may be suffering from it,” Barnes said.

Barnes said the UC system is essentially being forced to pay for work produced by its researchers. “To actually provide access to these articles in these journals the library actually has to buy that content from the publishers,” Barnes said. “So basically we are buying back all of this scholarship that was produced by our faculty.”

Barnes also said although the UC system has good bargaining power due to the prestige of UC researchers who contribute to a lot of the scholarships, negotiations don’t always work out well.

“As a result we spend millions of dollars buying back scholarship from these publishers and we just want it to be a little more balanced,” Barnes said. “We don’t mind paying for publishing but we want to pay a fair price.”

According to Barnes, students should become more informed about publishing practices because they are at the core of the issue.

“If you’re concerned at all about the educational system here in the US as well as access to information, I think that students should pay attention to what is happening in scholarly publishing and the open access movement itself,” Barnes said.

A version of this story appeared on page 4 of Thursday, October 23, 2014’s print edition of the <em>Daily Nexus.</em>