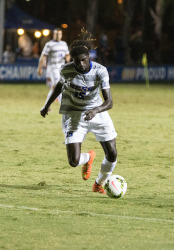 The Gauchos and Mustangs will try to break a second-place tie when they meet this Saturday. Dustin Harris/Daily Nexus

In yesterday’s return to Harder Stadium, the UCSB men’s soccer team ended a four-game winless streak with a dominant 4-1 win over Sacramento State. Santa Barbara will continue its current three-game home-stand with a game against conference rival Cal Poly this Saturday.

The timely bounce-back win keeps the Gauchos tied with Cal Poly for second in the North Division at 7-6-2 overall and 3-2-1 in conference. A third straight loss for the Hornets puts them at 4-9-2 overall, 2-4 Big West and in last place in the North.

“Tonight it was nice to be home. I thought that we had a good two days of practice and it showed up tonight,” Head Coach Tim Vom Steeg said. “We were dangerous up front and I thought we were pretty good in the back. We lost a little focus in the second half, but overall, it was a really important win.”

After scoring just one goal in their last four road games, the Gauchos benefited greatly from finally getting to play on their home turf again. Sophomore midfielder Andy Perez kicked off the scoring for UCSB in the 17th minute, when sophomore midfielder Ismaila Jome targeted him with a low cross from the left wing. While fending off a defender, a sliding Perez was able to get just enough of a touch on the ball to roll it past the keeper and inside the left post.

“I saw Ish running down the wing and I knew he was going to cross it. I made a run across the front post and it just went right under [the defender’s] foot,” Perez said. “I stuck my leg out and it just happened to hit the bottom of my foot and it went into the right place.”

Midfielder Axel Mendez stole the show from there, as just eight minutes later, he put the Gauchos up 2-0 with a wonderful strike from the left side of the box towards the far post. Then, just half a minute into the second half, the freshman capitalized on an easy one-on-one finish to secure his first career brace.

“I sat Axel aside this week and we had a long conversation about the fact that there’s probably three or four kids on this team that have the ability to score goals,” Vom Steeg said. “I’ve seen him score at every level, I’ve seen him score against top competition, and he needed to score. So, I’m very, very happy with his response tonight with two good goals.”

In the 50th minute, junior defender/midfielder Duncan Backus fired a free kick from the edge of the box directly at redshirt freshman goalkeeper James Del Curto. Unfortunately for the Hornets, what should have been an easy save ended up coming off of the keeper’s gloves and falling into the right side of the net, giving Backus his second goal of the season and a commanding 4-0 lead for UCSB.

“We knew that offensively, if we could score some goals, then obviously that would take some of the pressure off,” Vom Steeg said. “Things worked out tonight and I thought the team responded well. Every game we play, hopefully we get more guys back and keep finding a way to win.”

Sacramento State finally got on the board in the 56th when a sloppy giveaway by Jome in the Hornets’ final third led to an easy, powerful finish by senior forward Chimdum Mez. The goal was Mez’s seventh of the season, putting him in a tie for second best in the Big West.

Due to injuries and suspensions, Head Coach Tim Vom Steeg was forced to add Perez to the lineup for the first time this season after sitting the first 14 games with the intention of redshirting. With just four games remaining on the schedule before the Big West tournament, the decision to take a year of eligibility away from Perez was not an easy one to make, but it has resulted in immediate results.

The Gauchos will look to keep their newfound momentum going when they play bitter rival Cal Poly this Saturday at home. After falling to UC Davis 1-0 last night at home, the Mustangs come to town tied with UCSB for second place in the North with a 8-4-3 overall record and a 3-2-1 conference mark.

“At this point, again, it’s not so much about who we’re playing, but it’s about us,” Vom Steeg said. “It’s our season on Saturday, it’s our season next Wednesday, and the players are fully aware. Our goal is still to take this group somewhere.”

With 25 goals scored this season, Cal Poly possesses the second highest scoring offense in the conference, behind only No. 3 UC Irvine. This efficient production is due in large part to the Mustangs owning the top offensive player in the Big West this season in Chase Minter. With seven goals and four assists this year, the junior midfielder has a conference-best 18 points to his name.

Backing Minter up offensively are a pair of dangerous weapons in Matt Lagrassa and Kaba Alkebulan, who have tallied 12 and 11 points, respectively. To put those numbers in perspective, the Gauchos’ leaders in points this season, sophomores Drew Murphy and Nick DePuy, have nine points apiece.

Kickoff against Cal Poly is set for 7:30 p.m. this Saturday at Harder Stadium. The game will also be televised on Fox Sports Prime Ticket.

A version of this article appeared on page 1 of October 23, 2014’s print edition of the Daily Nexus.