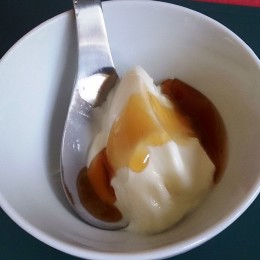 I’ve had a lot of descriptor words attached to me, trailing behind like a band of toys, each different in color and shape. Throughout the years I’ve encountered chill, exotic and even the occasional “rasbitty” — whatever that means — but the one word I have identified with all my life, “granola”, describes everything about me: from the thoughts, flowing in through one ear and out the other, to the life-altering decisions I make on a daily basis. But most importantly, the granola lifestyle dictates what food I decide to sip, sniff, savor and fall in love with.

As a foodie for life and forevermore, I can always thank my dad for being the head explorer and captain of all of our family food adventures. Together we embarked upon a lifelong journey, traveling through vegetarianism, raw-foodism and phases ranging anywhere from sprouting to the painstaking process of making homemade lavashak, which is kind of like an all-natural, Persian fruit roll-up. I recently tried his newest discovery: yogurt made from scratch.

The yogurt itself is light and a little sour. Made using only milk and some live culture, every spoonful tears me away from the white noise of my surroundings and plunks me right in the midst of jagged hill tops filled with grape vines, every color flooding my surroundings more vivid than the last and the only discernible sound being the coarse crashing of waves onto the coast stretching out below me. I imagine this is exactly how yogurt tasted in ancient Greece. There are no preservatives added, no sugar nor flavoring. These Grecian people knew how to savor the natural tastes of the world around them and that’s exactly what I do with my dad’s yogurt. The only thing better than tasting my dad’s food is hearing him talk about it:

“When you read labels there’s all kinds of stuff in it, and I just wanted to know what goes in it. I like cooking, I like to make my own things; I enjoy it. For me it’s, uh, it’s like a meditation. And I enjoy the whole process, the process of creation, the process of creating something good for myself — good for the family.”
It’s pretty obvious where I get that whole granola vibe, huh?

The yogurt itself is an easy thing to make. Initially it requires store-bought, live-culture yogurt but, after each batch, reserve a bit and incorporate it the next time. Start with a half-gallon of organic milk. Put the milk over medium heat until the temperature rises to 180 degrees Fahrenheit, stirring frequently. Once your concoction reaches 180 degrees, turn off the stove and remove the lid, allowing it to cool to 110 degrees. Mix in the three tablespoons of yogurt with live culture and stir well. Replace the lid of the pot and place in the oven. All that’s left is to turn on the oven light and leave the brew to sit overnight. This keeps the yogurt warm while the culture multiplies. Before eating, place the yogurt in the fridge for a few hours, allowing it to firm.

For a treat on the savory side, mix in some diced cucumbers with chopped mint or dill. If you’re looking for something sweet, just add some of your favorite jam or preserve and mix together. Or just have it plain. It’s good for your body; it has the right bacteria for your digestive system. You also reap the benefits of making it yourself. By taking part in the process, you not only know what you’re putting in your body, but you develop a closeness with your food that can heighten any eating experience.

This story originally appeared on page 22 of Thursday, October 23, 2014’s print edition of the Daily Nexus.