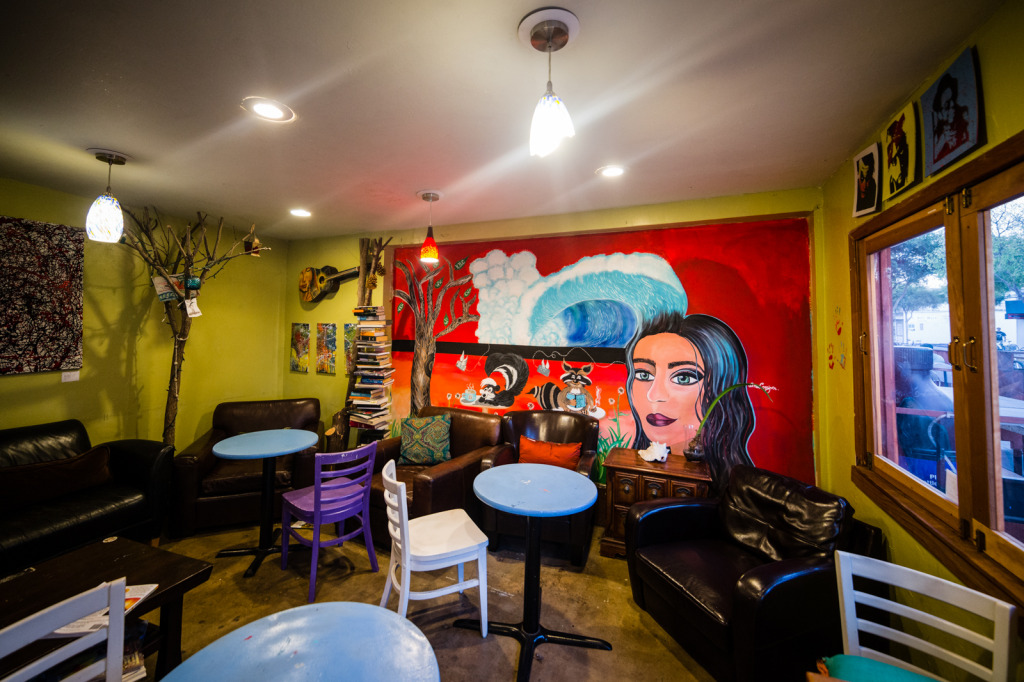 The new mural was created in remembrance of the students whose lives were tragically lost last May. The piece is meant to reflect the community as a whole in the wake of the recent calamity. Eric Swenson / Daily Nexus

The mural depicts a girl with her hair transforming into a wave that sits on a sunset, as well as a skunk with a mug of coffee and a raccoon smoking a cigarette and reading a book. A tree painted to the left of the photo has six leaves, each dedicated to one of the students who lost their lives last May.

Coffee Collaborative owner Steve McDonough said the idea of redoing the mural has been in the works for about a year, but it was not until recently that he decided to replace the old mural with something that better reflected the community.

“Ana asked me … ‘Is it okay if I make a mural?’ and I thought we should probably redo it anyways,” McDonough said. “I was really hesitant, but it came out so much better than I suspected.”

According to McDonough, the mural’s dedication to the six victims makes the painting personal for him and other Isla Vista residents.

“We got a bullet through our window,” McDonough said, “and those leaves, each one is one of the victims.”

Corrigan said she envisioned the mural from the start as a tribute to the victims of the shooting.

Corrigan also said it was important that the piece incorporate an aspect of last May’s tragedy in order to commemorate the students who passed away.
“People are going to never forget,” Corrigan said. “When people pass away, you get this explosion of sympathy, and I wanted something always there for them to be remembered.”

According to Corrigan, she chose to contribute her artwork to the Coffee Collaborative because it spotlights both student art and local musical talent.

“I just feel like everyone has their own contribution to this place because there’s so many local art places, and you know people come here and play their music, they have their open mic nights,” Corrigan said. “It’s the only place in Isla Vista where students can, like, contribute … whether they’re doing homework or hanging out.”

Corrigan said she has displayed many of her much smaller pieces before, but the mural is her largest to date.

“Size-wise this is the biggest painting I have ever done,” Corrigan said, “but I have been selling my paintings for about a year now, a lot smaller than that.”

Although the girl’s hair transforming into the wave was Corrigan’s idea, she said McDonough prompted her to put the skunk and raccoon in the mural. According to Corrigan, it took about a week to complete the mural, and while she was not paid to do the work, McDonough paid for the paints she used.

This story appeared on page 3 of Thursday, October 23, 2014’s print edition of the Daily Nexus.

Ana,
Your work is as beautiful as you are. Your Dad must be so proud of his Angel. Such talent you have what a gift to the world. So proud of you! XO, Tia Dawn