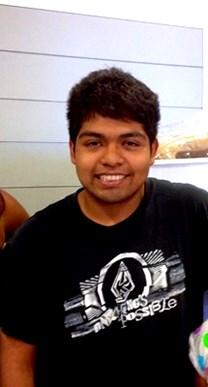 Second-year pre-biology major Michael Anthony Martinez passed away at his home in Costa Mesa, California, last Tuesday, and the cause of his death is currently unknown.

According to a Dignity Memorial Obituary written by the Martinez family, Michael Anthony Martinez was born in Santa Ana, California, on January 14, 1995 to Ana and Miguel Martinez. Martinez attended Sonora Elementary before moving onto Davis Elementary and Eastbluff Elementary. He graduated from Corona del Mar High School with several teacher letters of recognition awards.

Laura Mayberry, one of Martinez’s classmates at Corona del Mar High School, said she enjoyed having Martinez in her class and described him as “bright, funny and kind.”

“Michael was academically gifted and his presence and contributions uplifted the class as a whole,” Mayberry said. “Not only was he academically gifted, but he was a young man of great character and integrity. I adored and respected him beyond measure. He has made a life-long impact on me. He will be forever missed and in my heart.”

According to the obituary, his younger sisters Victoria and Sofia Martinez looked up to their brother, admiring his ability to make anyone laugh. While growing up, Michael and his family enjoyed road trips to Yosemite, Las Vegas and the Grand Canyon with Martinez guiding them as the designated “direction giver.”

Martinez was outgoing, smart, personable and loved exploring new places, spending time in nature and playing sports. He was an excellent team player in soccer, baseball, swim, lacrosse and basketball, but he particularly enjoyed football, helping his team win two CIF Championships, according to the obituary.

Second-year biology major, and longtime friend of Martinez, Olivia Dajee said she had known Martinez since the seventh grade and called knowing him “a privilege.”

“He was such a good friend of mine and I got really close with him my senior year of high school and he would always yell ‘DAJEE’ across the parking lot in high school.

Dajee said that their friendship stayed strong when the two both ended up at UCSB.

“He would still yell my name whenever he saw me and give me big bear hugs. He was one of the nicest, outgoing guys I know and he was always friendly to every person he met,” Dajee said. “I can’t believe he is gone because he was one of those people I could talk to about anything and I miss him so much already and it’s only been a week, I can’t imagine the years to come without him.”