The Daily Nexus
The Brew Review
The Great Pumpkin Beer…Or Is It?
October 16, 2014 at 5:00 am by Allison Wright

How many times can satirists rehash the Pumpkin Spice Latte? In light of comedy’s most recent victim, the OTM staff sought to revitalize the tarnished image of sippable pumpkin. Unfortunately for Starbucks, the syrupy coffee bev is the ugly, deformed reject forgotten in the pick-your-own patch. Our pumpkin drink of choice falls into the alcoholic category. Say goodbye to the latte and say hello to the ale.

In preparation for Santa Barbara’s annual beer festival, Pints for the Park, six amateur brew snobs combined their tasting prowess to profile craft beer’s perennial, autumnal trend. Focusing on the individually sold pint, the panelists selected seven fresh brews, all of which can be purchased at BevMo or Keg & Bottle, ranging from household names like Samuel Adams and Rogue to California breweries such as Half Moon Bay’s Mavericks and San Jose’s Hermitage.

The King of Pump (left) I think ‘beer drinker’ is a little too casual and connoisseur implies you drink a lot of high quality. I drink a lot of all qualities. Just alcoholic. The Queen of Kin (center) A lover of cider; a hater of beer. Pumpkin-in-chief (right) Poppin’ bottles under Storke. Art by Emily Zhang 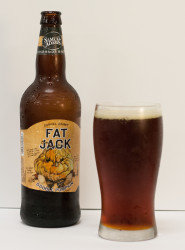 Weighing in at 8.5 percent ABV, the Boston Lager’s craft creation actually throws 28 pounds of the orange squash into each barrel. Despite its use of real pumpkin, the smoky malt and array of spices in this syrupy double seems to smother any hint of pumpkin flavor. As one taster stated, “this is like molasses fermented in a garbage disposal.” Certainly a heavy hitter, this beer is neither light enough nor tasty enough to become your next session beer. 1.8/5

QK: “I wouldn’t even drink this to get drunk.”
PIC: “It’s salty in my mouth.”
KP: “Allspice and cloves nose, malty, large carbonated bubbles, but no real pumpkin flava.”
S: “Like a syrupy, salty cola, it tastes as ugly as the pumpkin on the bottle.”
PPPD: “Admirable for a beer but pretentious for a pumpkin ale.” 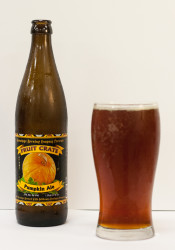 Hailing from San Jose, this malt beverage pours a cloudy, deep copper and hits the liver hard at 9 percent ABV. Brewed with California heritage pumpkins, the Fruit Crate faces a similar problem to the Fat Jack. But where Sam Adams overworked their brew, Hermitage aired on the side of simplicity. While high in alcohol, the overall mildness of the ale in both smell and taste, (with the exception of its subtle burnt sugar aftertaste), does little to set it apart as a seasonal edition. Describing it as the Miller High Life of pumpkin beers, the Queen of Kin “would drink this to get drunk.” 1/5 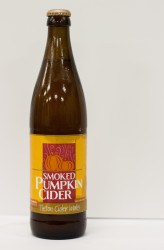 The black sheep of the pumpkin beer test, the smoked pumpkin cider serves to satiate the taste buds of those less passionate beer drinkers. Unlike the first two brews, Tieton Works eschews the full gourd and instead opts for the addition of “natural pumpkin flavors” to its smoked apple cider and oddly enough emerges with a taste that almost resembles the October favorite. Described as earthy like raw pumpkin seeds or “the goop that you scoop out of future jack-o-lanterns” by the Squashtress, this cider hits the mark. Unfortunately, the cider pours a neon amber resembling dehydrated piss and to some gives off notes of canned pineapple. Sweet and perhaps even poundable, this 6.9 percent ABV cider may actually be worth uncapping. 3/5

QK: “I would definitely drink this to get drunk.”
PPPD: “No visible seeds.”
EG: “It tastes almost like a special fruit juice that you drink every morning in your $4000 per month high-rise Manhattan studio in the fall season.” 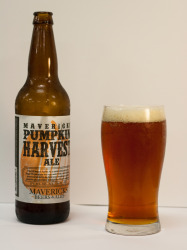 Sent down the coast from Half Moon Bay, this 5.5 percent ABV ale adds roasted sugar pie pumpkins to the brew kettle along with a clandestine blend of spices. They are not the first to brew pie in a pint but they are the first to approach “pulling it off.” Hosting a “pumpkin pie spice nose and cinnamon-y pumpkin taste followed by a subtle maltiness” according to the King of Pump, and reminding the Pumpkin-in-Chief of fall, warm colors and baked goods, we struggle to find anything funny to say about Mavericks’s adequate brew. 3/5 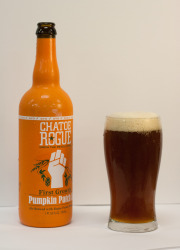 Tending pumpkin vines alongside their hops 77 miles from Newport, OR, Rogue is eager to tell you that yes, they do that, too. We’re glad this pumpkin conglomeration steers away from the Voodoo Doughnut flub. With an opaque copper pour and a foamy head, the Pumpkin Patch Ale has an anise and allspice nose, a distinct pumpkin essence and notes of sweetened soy milk. Perhaps it’s this creaminess that accompanies the pie flavors that allows the Squashtress to conclude that for better or for worse, this orange bottled pint “IS the PSL in beer form.” 3.38/5

The pumpkin panel takes a Halloween candy break. The Queen of Kin reminds us, “pumpkin beer is to October as candy is to October.” Chocolate is only a decent palate cleanser. Is anyone not drunk? 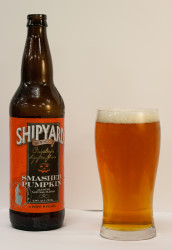 Smashed Pumpkin makes us want to smash pumpkins, or vomit. If we thought Fat Jack was too complicated, Shipyard’s 9 percent ABV signature series suds is like a combination of dying Douglas Firs, nauseating potpourri, and Big Red gum if gum could rot. Excessively hopped and bitter, the beer is unbalanced and induces “the visceral feeling when you taste a dumpster.” If you buy any beer on this list, Smashed Pumpkin is the one to use for target practice. 0.33/5

EG: “The smell reminds me of a men’s restroom full of urinals violated at a high school football game. The taste is like pumpkin with a hint of urinal cake.”
QK: “Tastes like whiskey and gin and Smirnoff and tequila gone bad five years ago. Why am I drinking this? Pee. Poop. No pumpkin. CHUG TEST: NO. EW.”
PIC: “… why?”
S: “Do I even like pumpkin beers?!”
KP: “Smells like fresh pressed spiced apple cider. Salty, bitter, alcohol-y but you definitely taste pumpkin.”
PPPD: “FUCK … just … fuck.” 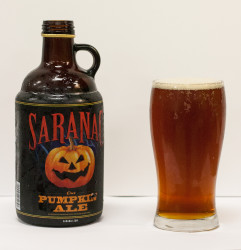 Certifiably smashed and repeating the mantra, “No more pumpkin beers!” the panel is at the end of the line. Fortunately the final brew, bottled in a miniature growler, Saranac’s Pumpkin Ale combines a deep burnt orange hue with a hearty bubble and its subtle pumpkin notes almost make up for the horrors of Smashed Pumpkin. Perhaps seeming like soda in comparison to its predecessor, the palatable pumpkin ale is pleasingly “herb-ilicious.” While all fumbling to articulate due to general drunkenness and a candy coma, we clumsily decide that Saranac is drinkable and perhaps worth purchasing again. 3.13/5

So what have we accomplished? Other than getting drunk on pumpkins, most of  us realized that pumpkin ale is only popular in October for a reason. If one could call the style “hit or miss,” pumpkin beer misses 70 percent of the time. For those unfazed by the notion of pie-flavored alcohol, (looking at you, fans of Pinnacle Whipped), let the brave souls of the pumpkin panel be your guide and skip the less palatable options. Ultimately, beer is good. Pumpkins may or may not be the best flavor additive to our sudsy pints, but fuck it, we’ll still chug ‘em.

Think you know better? Put us in our place or commend our accuracy below.

This story originally appeared on pages 21-22 of Thursday, October 16, 2014’s print edition of the Daily Nexus.