The Daily Nexus
Sports
Santa Barbara Heads South For Roadtrip
October 16, 2014 at 5:00 am by Martin Cobos 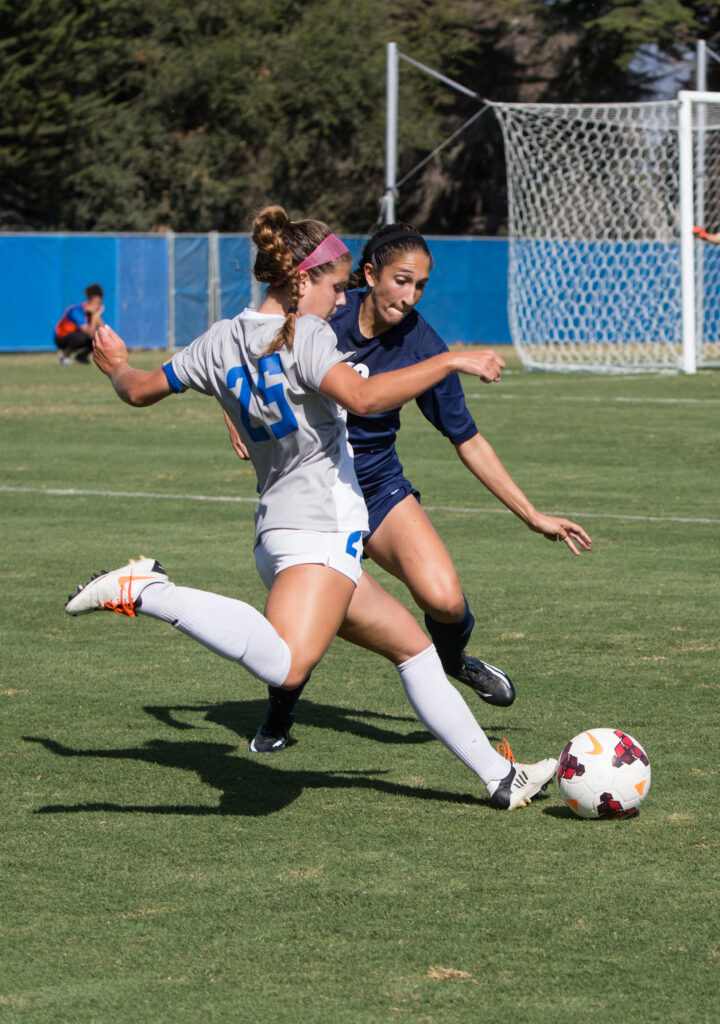 The UCSB women’s soccer team will travel south this weekend as it is set to compete on the road against UC Riverside on Friday and UC Irvine on Sunday.

Following two consecutive home victories, the Gauchos have improved their overall record to 8-5-2 and Big West record to 2-2. UCR will come in with a record of 6-5-3 and a conference record of 1-2-1. Irvine currently stands with an overall record of 4-6-3 and 0-1-1 in league.

“We talk about winning our home games and nicking one or two road games,” Head Coach Paul Stumpf said. “We are going to have to get at least one road win if we hope to get to that conference tournament.”

Following back-to-back conference wins, the Gauchos seem to be back on track to make a splash in the conference tournament. UCSB outshot their opponents 29-13 and had a 15-2 advantage in corner kicks this past weekend.

“When we get corner kicks for this team, we are unstoppable,” senior midfield/forward Madison Beckley said. “We have to capitalize on this next weekend and I think we’re a good team on the road.”

The offense seemed to be clicking behind goals from freshman midfielder Chace Schornstein and junior midfield/forward Angelisa Cortez. Cortez currently leads the team with a total of five goals on the season.

Along with the hot offense, the Gaucho defense has been superb at making sure the team is able to stay in games. Santa Barbara still has not allowed more than two goals in a single contest this season and junior goalkeeper Beth Ritter is posting an average of less than one goal allowed per game.

As the Gauchos get set to face the Highlanders they will have to remain aware of their opponent’s near flawless play at home. Riverside is 4-0 in home games and have outscored their opponents 10-0.

UC Riverside possesses a number of offensive weapons as 14 different players on its roster have scored goals this season. Leading the way has been sophomore forward Blanca Barrio and junior forward Tyler Cunningham, who each have three goals and six assists on the season.

Following Friday’s match, the Gauchos will head to Irvine where they will be greeted by yet another team that has been dominant at home. UC Irvine has a home record of 4-1-2 with its only loss coming to Loyola by a score of 2-1.

The Anteaters have been susceptible to giving up goals this season with a GAA of 1.31 and only two shutouts to their credit. However their offense has been adequate, primarily centering around senior forward Laura McGrail who has five goals including three game winners this season.

“These next two games are going to be crucial,” Ritter said. “We need to stay tuned in and be focused every second because there is much more adversity on the road than at home.”

The Gauchos will face UC Riverside this Friday at 6 p.m. before traveling to UC Irvine for Sunday’s match at 1 p.m.

A version of this article appeared on page 13 of October 16, 2014’s print edition of the Daily Nexus.

Photo courtesy of Dustin Harris of the Daily Nexus.