The Daily Nexus
Volleyball
Gauchos Take On First and Second Place Rivals at Thunderdome
October 16, 2014 at 5:00 am by Sarah Stigers 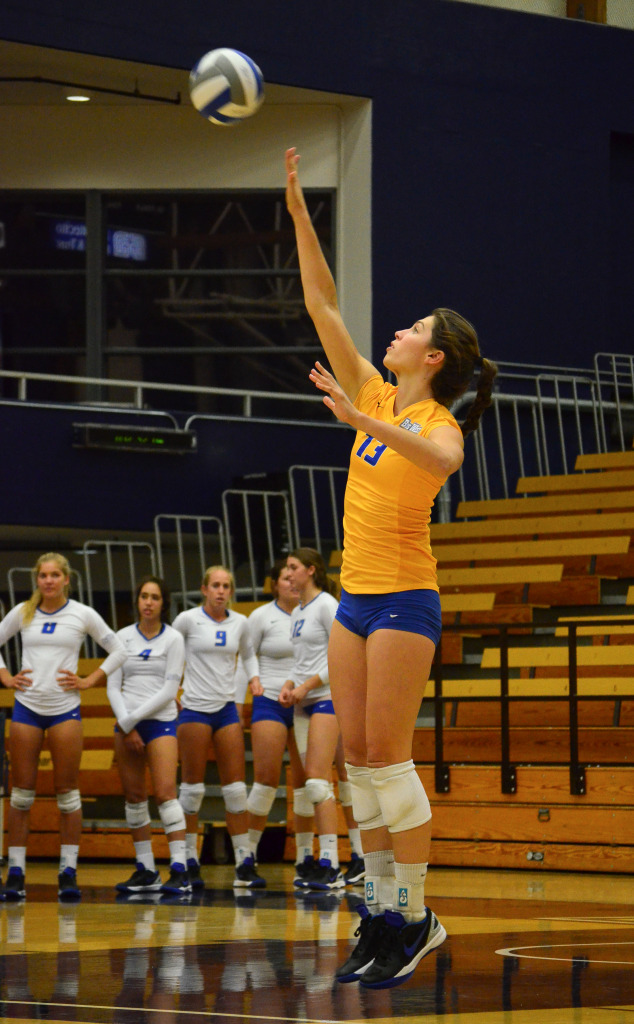 The UCSB women’s volleyball team will be in for a challenge at the Thunderdome this weekend as it faces the top two teams in the Big West in Long Beach State and Cal State Northridge. Santa Barbara will play Long Beach on Friday followed by second-place Northridge on Saturday.

“We just got to get better and be prepared to play some strong opponents,” Head Coach Nicole Lantagne Welch said. “It’s not going to be hard to get the team fired up to play them, but we are going to have to do really well, and we need to clean up some stuff on our side to make that happen.”

Following their best defensive match of the season against Fullerton last weekend, the Gauchos, 3-2 in Big West and 8-8 overall, will need to find consistency to defeat the 49ers, who are 4-0 in conference and 14-4 overall. Northridge is currently 3-1 in Big West and 12-4 overall.

“We are seeing some bigger hitters this weekend and we need to be solid with the block and slow them down,” Lantagne Welch said.

Those bigger hitters consist of recently named Big West Player of the Week, Long Beach’s senior outside hitter Bre Mackie, who currently rests fifth in the conference for kill percentage, hitting a 3.62 average in league play.

For the Northridge offense, junior outside hitter Danetta Boykin is leading the team in both total kills and kill percentage swinging with 52 and 3.47, respectively, in Big West play.

Combatting the strong offenses will be a UCSB defense made up primarily of sophomore outside hitter Ali Spindt, junior setter Hanna Nielson and senior setter Ali Santi, who top the team in digs this season. In addition, sophomore middle blocker Allie Sullberg and freshman outside hitter Chanel Hoffman have 18 and 17 block assists this season, respectively.

“We’re excited, but it’s going to be a tough weekend at home,” junior libero Shauna Klein said. “We have huge opportunities this weekend and we want to take advantage of that.”

Offensive opportunities will be important against Northridge considering its total blocks in the season puts the team seventh in the league.

“Every week we prepare for the teams ahead of us,” Klein said. “We’re really excited but we have a big weekend in front of us.”

Santa Barbara seeks to end its two week streak of splitting its weekend matches. The Gauchos will face the 49ers Friday and Matadors Saturday at the Thunderdome. Both games scheduled for 7 p.m.