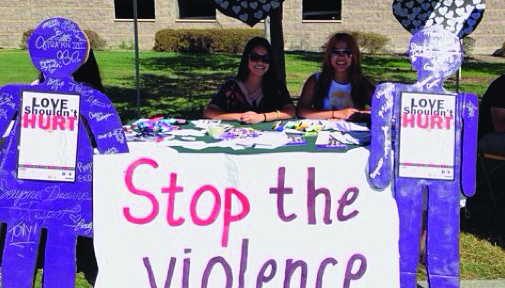 Hosted by multicultural sorority Sigma Alpha Zeta, Inc., the past week’s events have included a screening of “An American Crime” at the MultiCultural Center Theater on Monday, a Silent Vigil Walk on Tuesday and a self-defense workshop at the UCen yesterday, among other activities. Today, Campus Advocacy Resources & Education (C.A.R.E.) will give a presentation hosted by the Women’s Center about domestic violence in the UCen at 6 p.m. and tomorrow “Light Your Hopes” will allow attendees to light floating lanterns at Goleta Beach at 7 p.m.

According to Sigma Alpha Zeta Chapter President and fourth-year psychology major Jacqueline Rosas, this week’s events are geared toward “empowering” members of the campus community with information about personal violence in order to foster an environment that is “happy and healthy.”

“Many students may be involved in relationships that are hurting them but are too fearful to take action,” Rosas said. “It is important for these students to know that they are not alone. We want them to be aware that there are people who they can turn to.”

Rosas said the events are not meant to be exclusively for those involved in situations of abuse but instead are open invitations to all students to gain information about personal violence and spark discussion about issues surrounding it.

“Even if a person is not engaged in any toxic relationships, those around them may be,” Rosas said. “We want students to speak out for themselves, for their friends and peers, in order to put an end to this brutal cycle.”

According to Rachel McCormack, Women’s Center event coordinator and fourth-year feminist studies and psychology double major, this week’s events explore an issue that affects many students on campus and highlight that domestic violence is not limited to physical violence but also in large part includes emotional and psychological abuse.

Sigma Alpha Zeta Community Services Chair and third-year global studies and sociology double major Natalie Dimas agreed and said the events of the “Love Shouldn’t Hurt” series have been organized in order to shed light on instances of abuse that many students may be unaware of or afraid to discuss.

I know there have been times in the case of my own sisters and friends where someone is constantly putting them down and being emotionally abusive, and that’s not how it should be. Love should have more good times than bad,” Dimas said. “A lot of students are engaged in relationships like this but they don’t know they are.”

According to Rosas, discussion about domestic violence and other forms of personal abuse is the first step toward shifting the campus culture toward progress.
“Along with all those at our UCSB campus, we want to ignite a change in our student community,” Rosas said. “A change that will result in an environment where domestic violence, rape and any other types of violence is no longer seen or heard of.”

A version of this story appeared on page 1 of the Thursday,  October 16, 2014 print edition of the Daily Nexus.