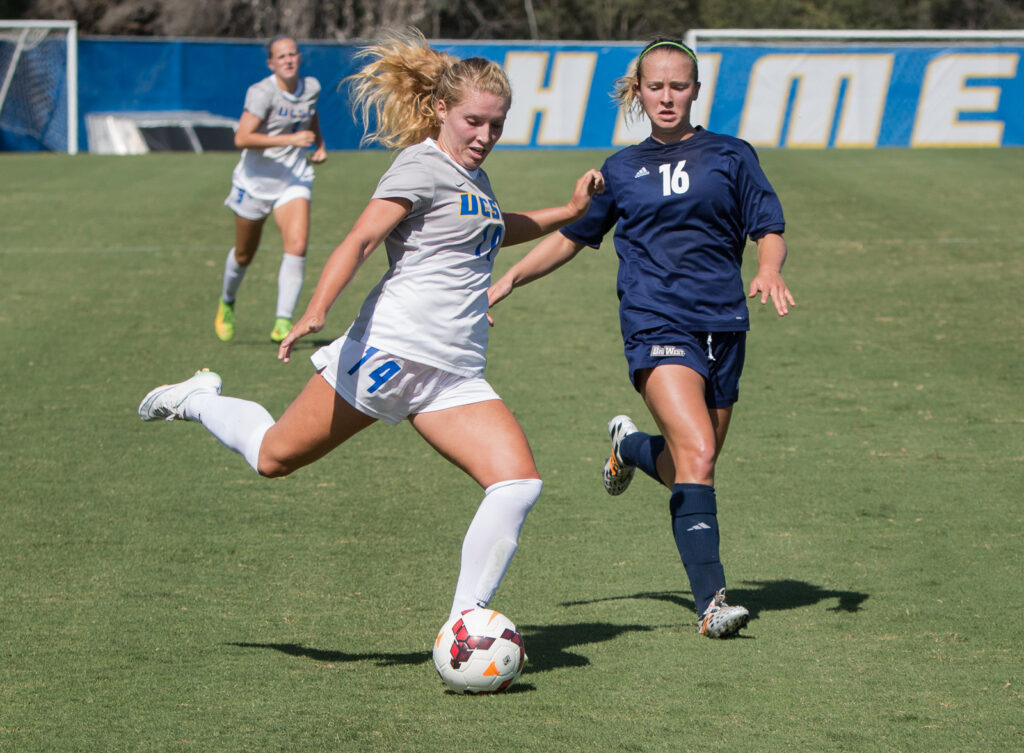 Late goals and dramatic finishes were the story this weekend for the UCSB women’s soccer team as it produced back-to-back conference victories. The Gauchos defeated Hawaii by a score of 2-1 on Friday before edging out UC Davis 3-2 on Sunday.

“A win in this conference is always going to be tough, but for the team to end up battling to the final whistle speaks volumes to the group,” Head Coach Paul Stumpf said. “I am so pleased about the quality of the soccer and to come out on top this weekend is a great reward.”

The Gauchos came out firing against Hawaii on Friday. Sophomore midfielder Sara Feder kicked off the scoring early with a goal in the first minute and a half of play to put the Gauchos up 1-0.

UCSB continued to put the pressure on Hawaii’s sophomore goalkeeper Erica Young by producing near misses and holding a 16-8 advantage in shots.

Following halftime, Hawaii tied the game in the 63rd minute as sophomore midfielder Kama Pascua produced the equalizer. A controversial missed call froze the Gaucho defense long enough for Pascua to pass through the back line and score.

A scary moment occurred in this one, as a mid-air collision resulted in UCSB senior midfielder Miranda Cornejo being carted off the field on a stretcher. Hawaii senior midfielder Krystal Pascua was given a yellow card for the incident, and the game resumed with less than 10 minutes to go.

The Gauchos continued to attack through the final minutes, and a deflected ball off the crossbar provided the team the only chance it would need. With 11 seconds left, senior midfield/forward Madison Beckley prepared for a header that would find the back of the net and secure victory.

“It was definitely a thriller,” Beckley said. “It has brought our team together and we are all battling through these games together. When we are in the box, we know that somebody is going to capitalize on that chance.”

Coming off the thrilling victory, the Gauchos hosted another home game as UC Davis came to town for the Sunday afternoon match. UCSB struck first once again as a low strike from junior midfield/forward Angelisa Cortez found the back of the net in the 38th minute of play.

The lead didn’t last long however, as Davis sophomore defender Rachel Smith tied the game just before halftime with an unassisted goal.

With 20 minutes to go in the second half, the Gauchos reclaimed the lead after a corner kick from senior midfielder Geneve Dromensk found the head of midfielder Chace Schorenstein. The freshman was able to finish and give UCSB the 2-1 lead.

With time winding down and victory almost assured, UC Davis shocked the Gauchos as a strike from junior forward Sienna Drizin tied the game with only 3 minutes to play.

Two overtimes were needed to decide the match. With 19 seconds left in the second overtime, a corner kick resulted in a header from Feder to hand UCSB the victory.

The Gauchos will travel to face UC Riverside this Friday at 7 p.m.