The Daily Nexus
The Brew Review
The Cultural Inebriation of Oktoberfest
October 9, 2014 at 5:00 am by Allison Wright 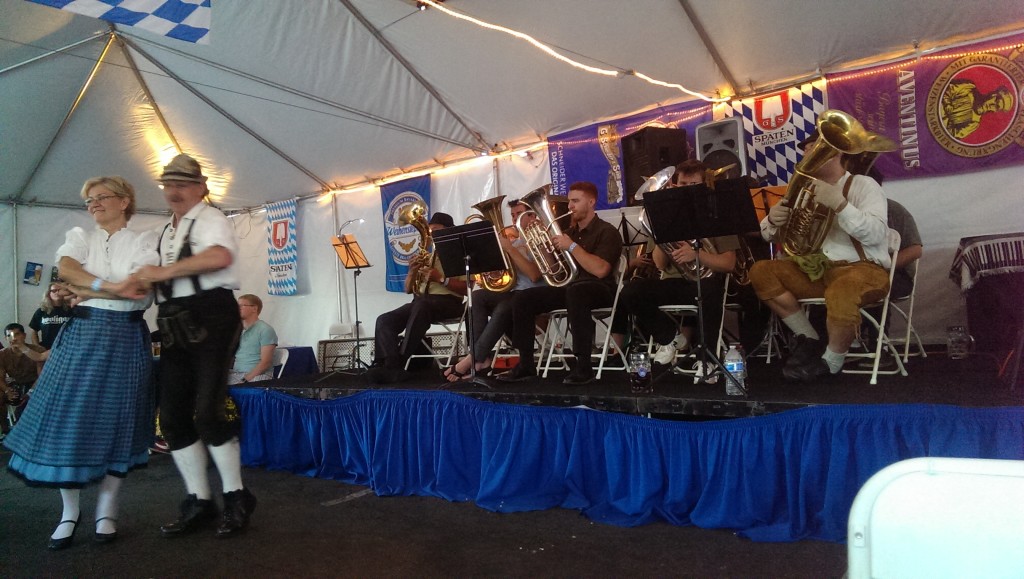 Upon the dais, six euphoniums and a pack of tubas oom-pa. An aging couple in traditional Bavarian garb takes tiny waltzing steps, toeing discarded bits of strudel and twirling about like two children’s tops. One of the horn players pulls a piece of pretzel from the handle of his stein, rubs his velour-like lederhosen and begins to splutter along with the others. Two sets of suspenders and rolled up blue jeans stumble past, clinking their liters. One adds an ounce too much force and the thick glass shatters, letting what was left of the sudsy contents fall with a splash. Upraising just a handle to the heavens, he chants with the German accented emcee, “oi, oi, OI!” Spinning and reeling, bobbing up and sinking down to the bassy, Sousa-style march, I push my glass skyward, too, struggling under the weight of the liter of German brew. Three more steins crash into mine and a wave of foam washes over all of us. These are the final days of Oktoberfest. But instead of being bundled up in the chilly airs of a Munich meadow, I am sweltering in a temporary tent in Santa Barbara’s Funk Zone.

As the spilling beer ebbs, my drinking companion and resident Oktoberfest expert points to the most scantily clad costume we have seen yet. With puffed white sleeves, a short embroidered skirt and no chest coverage to speak of, who knows if this woman even knows the word dirndl.

“This is all just cultural appropriation!” Paige shouts, trying to drown out the tinkling of clashing glass and the slurred “beifalls” and farting tubas.

“What?! Cheers?” I respond with another hoist of the stein.

“No! Cultural appropriation!” she rejoins, tapping her beer vessel to mine anyway. The little woman and her husband dance past again, not releasing each other once. Her blue gingham dress grazes her calves and the bustier lacks the va-voom lacing like the rest of those that dressed for the occasion. I think I get the picture.

203 years prior to Paige’s trek to the motherland of drinking festivals, the first Oktoberfest began. In 1810, the festival took root in Munich after the celebration of a royal wedding between future King Ludwig I and Therese of Saxe-Hildburghausen. Today Oktoberfest lures over six million beer lovers to the same field, or weisn, of the original nuptials, where they guzzle over 1.75 million gallons of märzen, the fest’s alcoholic standard, along with upwards of 400,000 sausages.

I look down into the quarter liter of light gold and faintly bubbly weizen still sloshing in my stein. Taking a whiff of the banana-like scent and intaking a mouthful of the citrusy, wheaty bier, I think back to the unfortunate trigger words. Am I pilfering ideas, symbols, artifacts, styles or traditions in an offensive way? Am I a culprit of cultural appropriation as I delightedly sip on a German style bier brewed on California’s central coast? Does paying $15 for a commemorative stein worsen my cultural crimes? As I retreat from The Brewhouse’s ‘Vixen Weizen,’ the band rises, bows, and pick up their own neglected steins. In a thick German accent, the lederhosen and feathered hat clad emcee chants Oktoberfest’s onomatopaeic drinking mantra, “Tiki-taka, tiki-taka, oi, oi, OI!” Counting in German with hundreds of Americans shouting along to the best of their ability, he seems unaffected by the shmucks aping his culture. He swigs with the rest of us and starts playing a polka number.

By the time the drumming and singing German cues the chicken dance, I am on empty. After a few flaps and clucks, I push through the crowd of clapping and giggling drunks and sidle up to the crowded bar with Paige in tow. She opts for a traditional oktoberfestbier that is simultaneously being tapped in Munich: Spaten. Deeply colored like an especially frothy cup of black tea and an almost biscuit-like malt, this märzen is smooth and poundable. Wanting to branch out and taste as much as I can before the inevitably excessive inebriation, I ask for a sample of The Brewhouse’s ‘Football Saison.’ Why a Belgian style, farmhouse ale references the pig-skin in its name, I cannot say, but at 9.9 percent alcohol, I at least want to have a taste. The tiny pour is a translucent yellow-orange with a thin but fluffy, pale head. By smell alone, the beer has a pleasantly citrusy nose and I look forward to the first sip. Combining spicy hops, a hint of cloves and sweetness like bubblegum, the smooth and flavorful body masks its hefty alcohol content. With a hint of trepidation, I opt for a half-liter. No need for this beauty to plant me in the ever winding line for the women’s restroom.

After passing a five and a one across the sticky and beer-splattered bar, I realize I have committed what could be an Oktoberfest party foul. I can’t even claim to be drinking a German style bier anymore. I can no longer pretend to be celebrating a nuanced cultural tradition. I am just as bad as the bare skin dirndl lady and I am in the process of appropriating.

Or so I briefly believe; as I pass through the hop-lined doorway to the dance and music tent, I think I hear something out of place. Has this saison already begun disassembling my senses or are those guys actually speaking Deutsch? Their suspenders are just as fake as the rest of the dancing and glugging men on the darkening patio. They might be two of the few in this crowd who can actually pronounce “eins, zwei, drei!” but otherwise they blend like a clump free cup of cocoa. All smiles and no angry outbursts, these men, to put it drunkenly, are down with America’s interpretation of Oktoberfest.

Turning from the faces to the numbers, Munich’s massive congregation is far from an exclusive Bavarian party. With approximately 15 percent of attendees hailing from the surrounding European Union nations or from entirely different continents, Oktoberfest is evolving into a global phenomenon. If its original purpose fails to suggest its ever changing nature, what can? Beginning as an anniversary celebration with an emphasis on agriculture and horse racing, the festival changed with its people and many don’t even know the funfair’s past. When festival goers demanded more bier, the next year saw more local brews. Oktoberfest is an exemplar of a developing culture.

Although it has developed into a drunken celebration, Oktoberfest originally had no association to bier at all. The festival’s commitment to märzen has a history of its own that dates back far from Ludwig and his princess bride. Since the medieval era, Bavarian brewers crafted a late winter bier, typically in March. Märzen was saved for the hot summer months, when fermenting batches risked contamination from air borne bacteria. When temperatures dropped and the minute beer destroyers died off in autumn, winter beers would begin brewing. But with nowhere to store the future lagers, casks upon casks of märzen would have to be disposed of. When the anniversary of the king and queen became an annual festivity, binging on the would-be-purged bier became more integral to Oktoberfest than the original pastime: horse racing. In fact, jockeys ran their final Oktoberfest race in 1960, ushering in the funfair’s reputation as a festival renowned for its beer.

With imitations of the fest spreading not just across Germany in recent decades but across the globe, oktoberfestbier was defined by its style as well as its brewing location. In order to be served at the official festival, the bier must be brewed in Munich. Interestingly, this traditional style is not as trad as some believe. Generally a pale lager at today’s Oktoberfest, the official bier originally sported an auburn or copper hue and began transforming to its current state when a “Vienna style” technique was introduced by the Dreher Brewery. Despite its strict adherence to Munich only brewers, oktoberfestbier owes a portion of its popularity to an extraneous influence.

As the chicken dance blasts from the speakers once again, my incessant appropriation guilt sprouts feathers and flaps away. Originally titled “Der Ententanz,” the popular party song is actually of Swiss origin and yet frequently blares in Munich. We Americans bock along to the tune like kindergarteners (from Deutsch, by the way), with just as much goofiness as the German emcee. As we let our inhibitions go with each sip and put ourselves out on the dancefloor, bobbing our heads forward and back and joining elbows to do-si-do, we eliminate any feeling of isolation. We live in a global world, where ideas and styles and cultural objects cross borders as freely as a grain of wheat on the wind. When Spaten exports their premium märzen, they share an icon of Bavarian history with the world. While our maps maintain the squiggly lines that separate us, our constant interactions on a global level dissipate our boundaries.

While cultural appropriation remains a hot coal in our societal balance, sometimes we as people ought to embrace our position as international citizens. Without deliberating twisting deeper sensitivities such as religion, there is no harm savoring a sip of a well-crafted lager with a collection of fellow brew-heads. The dangers of freely appropriating others’ cultures should be kept in mind as a dangerous and harmful practice and undoubtedly, the excessively provocative dirndl edges past the line of ‘questionable.’ But in the case of Oktoberfest, raise your commemorative stein. Hailing from Germany, Leon Freyermuth perhaps states it better than I can. “It is my culture, but it isn’t mine” he claims, gesturing at himself. “If they enjoy themselves, I have no reason to be hurt about it … an exchange enriches both of our cultures.”

This story originally appeared on page 22 of Thursday, October 9, 2014’s print edition of the Daily Nexus.