The Daily Nexus
Previews: What's Going On
Getting Hard for Hard Day of the Dead
October 9, 2014 at 11:18 pm by Alex Bocknek 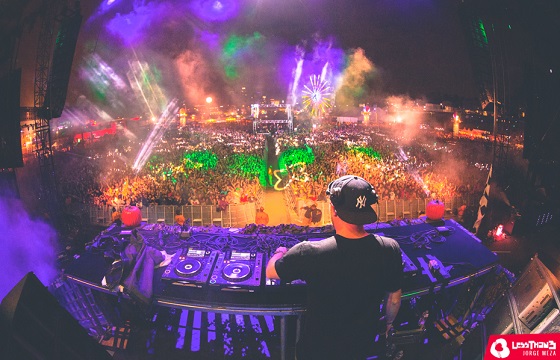 It’s almost that time again — the time when the streets are flooded by kids toting candy-filled pillow sacks and girls sporting skin-tight nurse costumes that would make any mother cry. Yep, Halloween season (aka the most outrageous party holiday) is about to be back in full force and so is the biggest Halloween party in Southern California: Hard Day of the Dead.

There’s a lot of buzz surrounding this year’s Hard DOTD. Newcomers, get ready for crazy costumes, elaborate skeleton facepaint and haunted mansion stages. For veterans who did not attend this year’s Hard Summer, the company has upgraded its fairgrounds from the already sizeable Los Angeles Historic Park to the massive (no pun intended) Pomona Fairplex. Most importantly, get ready for new tracks with nastier basslines and a longer bill with bigger names. Oh yeah, and ZHU is making his North American debut at DOTD. No biggie. 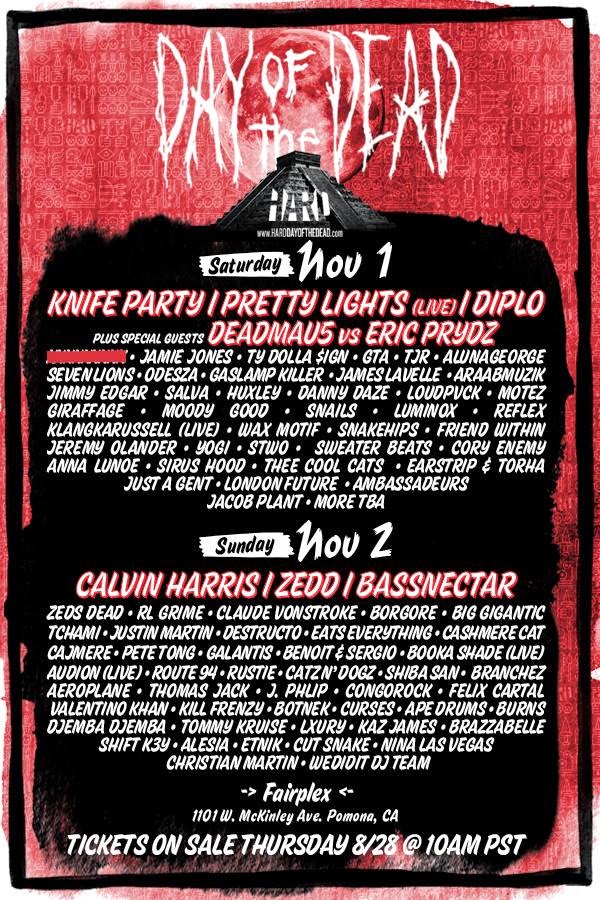 And that, folks, is why Hard events are always a heavy-hitter in the electronic music festival scene. Yes, if you go to Hard Day of the Dead you are paying for a festival, but unlike other big name festival production companies in the scene, Hard is not selling you admission into a glitzy LED art gallery. Hard does a good job at keeping the festival’s music the centerpiece of the action, so you’ll often find yourself surrounded by more electronic music devotees and less “festival experience” junkies. Just as well — a stellar lineup has to be expected when considering that Hard Presents is owned and managed by a musician, tech-house guru Destructo.

Now let’s talk about that lineup. Like any major electronic festival you have your standard staple big room house DJs like Zedd and Calvin Harris, but these big names are just the icing on the cake here. With club music’s reprisal into the limelight over the last two years it should come as no surprise that the deep house section is by far one of the strongest parts of the bill, boasting names like Wax Motif, Tchami, Shiba San, Claude Vonstroke and Justin Martin (of course, the Dirtybird BBQ stage wouldn’t be complete without this dynamic duo). There’s a quality array of artists encompassing just about every variant of electronic music under the sun, but there are three sets that you’ll be sorry you missed:

Before you berate me and tell me that this choice is obvious (which it is), hear out my reasoning. Deadmau5 is always a cold splash of water in the face from your typical dance music, and I have seen Eric Prydz more times than I can count. Prydz puts out consistently top-tier music and mixes flawless sets, but you already know that. If that wasn’t reason enough to see them already, everyone’s favorite overly cynical mouse recently dropped a full-techno set at Amnesia in Ibiza. My prediction is Prydz’s techno alter-ego, Cirez D, will team up with Mr. Joel Zimmerman for the most epic techno set that will never be heard again.

This rocking I-don’t-know-what-you-call-this-genre duo from Seattle is the definition of different. They have all sorts of energy and aren’t afraid to break out the drumsticks for a live performance. They released an EP and recently dropped their brand-spanking new LP, In Return. They don’t release tracks that are anything short of phenomenal. And they are humble — they love their fans. Attending this set will entail jamming out to genre-breaking dance tunes and likely being showered in thanks by these guys’ awesome vibes.

This UK-based duo is the face of future bass right now. Their music sounds like Mr. and Mrs. Pac-Man are getting hot and steamy in Doc Brown’s DeLorean, and it is awesome. Their stuff is upbeat and downright funky. If you’ve ever wanted to groove to spaceship beep-boops and feel sexy about it this is your set.

Obviously, I can’t cover all the great acts on the lineup in the limited space I have. The only responsible decision left is to go buy your ticket immediately before they sell out and get ready to shake some skele-booty at the Pomona Fairplex.