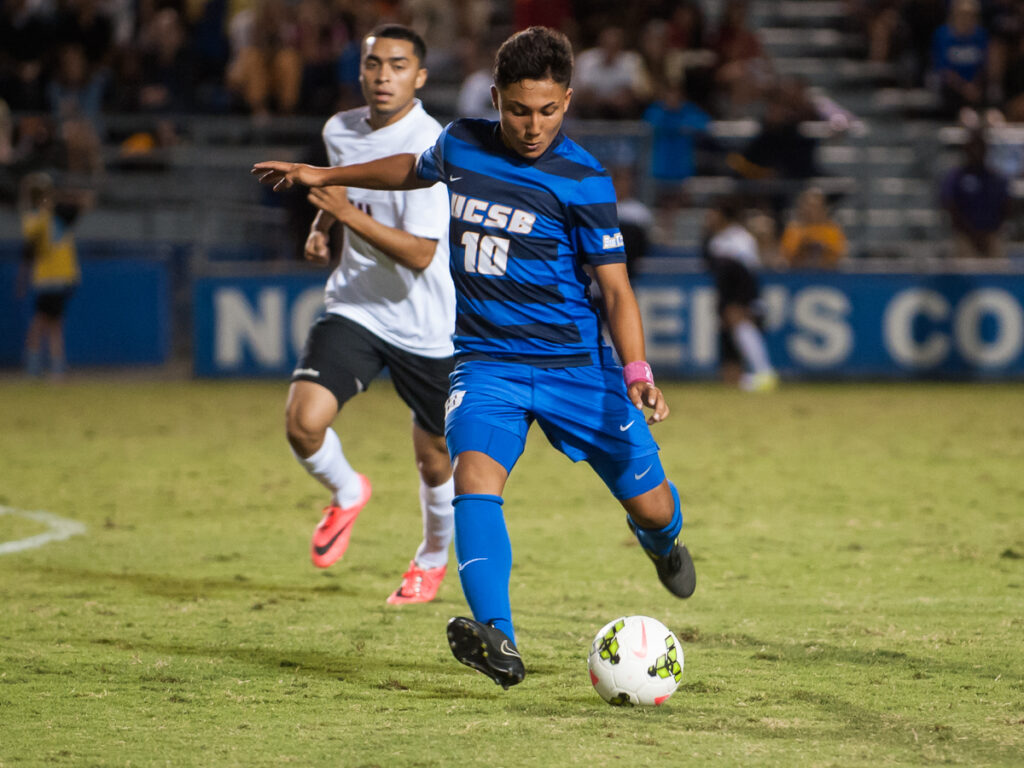 After starting Big West play with a perfect 2-0 record, the UCSB men’s soccer team hits the road this weekend for two more conference games against Cal State Fullerton and UCR.

With wins against No. 6 UC Irvine and Cal State Northridge last weekend, the Gauchos improved to 6-3-1 overall and 2-0 in conference and are currently tied for first place in the North Division with UC Davis.

“I think these are the two most important games that we’ll play this season,” sophomore left back Drew Murphy said. “After getting off to a good start last weekend, we have to keep it going. These two games are even bigger than last week’s and we’ve just got to continue to let this thing roll.”

On Thursday, the Gauchos head to Fullerton to play a Titan squad that has gotten off to a rough start to conference play. Garrett Losee has scored three goals to lead a respectable offense that has averaged 1.27 goals per game.

“People say that they’re 0-2 and this and that, but at the end of the day any team in our conference can beat anyone,” Murphy said. “Our gameplan has to be the same gameplan we always have: we’ve got to go out there and work harder than they do, have a little bit of fortune on our side and hopefully a couple goals go in.”

Next up for UCSB will be a Riverside team that has managed to get off to a solid 1-1 start in the conference despite an awful preseason. The Highlanders have been shut out in five out of their last six games and have really struggled against higher quality teams.

In its two wins this season over Pacific and Sacramento State, Riverside outscored opponents 9-1, compared to being outscored 11-2 in losses.

“We have a situation where I think we’ve played the best two teams on paper in the conference and now we’re going to two teams that have struggled,” Head Coach Tim Vom Steeg said. “Now you have to take the same energy and commitment to winning on the road. You have to be really cautious when you have a young team, because you can easily give up games quickly if you don’t do all the right things.”

A slow start to the season hasn’t stopped this young UCSB team from adding to what is now a 12-game unbeaten streak in conference games dating back to the beginning of last season. The Gauchos have been able to accomplish this thanks to several key lineup changes made by Vom Steeg, including moving sophomore Nick DePuy to starting forward and sophomore Murphy to left back.

“At 2-3-1 [overall], we were giving up goals and not scoring goals and we kept trying to find a combination that would be better.” Vom Steeg said. “We just kind of went with Drew at left back and we put Nick up front because we felt that’s what we needed and next thing you know those two are serving it to each other and winning games for us.”

Another key change came as the result of an injury to starting sophomore goalkeeper Josh McNeely, which thrust freshman Brandon Berke into the starting role.

Berke has gone a perfect 4-0 in the first four starts of his career while averaging a goals against average (GAA) of just 0.5, good for second best in the conference. He has also provided the Gauchos with their only two shutouts of the season, which includes the 1-0 win over a powerful Irvine side last Saturday.

Thursday’s game with Fullerton will begin at 8:00 p.m. at Titan Stadium. On Saturday, the Gauchos travel to UC Riverside Soccer Stadium for a 7:00 p.m. game.

A version of this article appeared on page 12 of October 9, 2014’s print edition of the Daily Nexus.