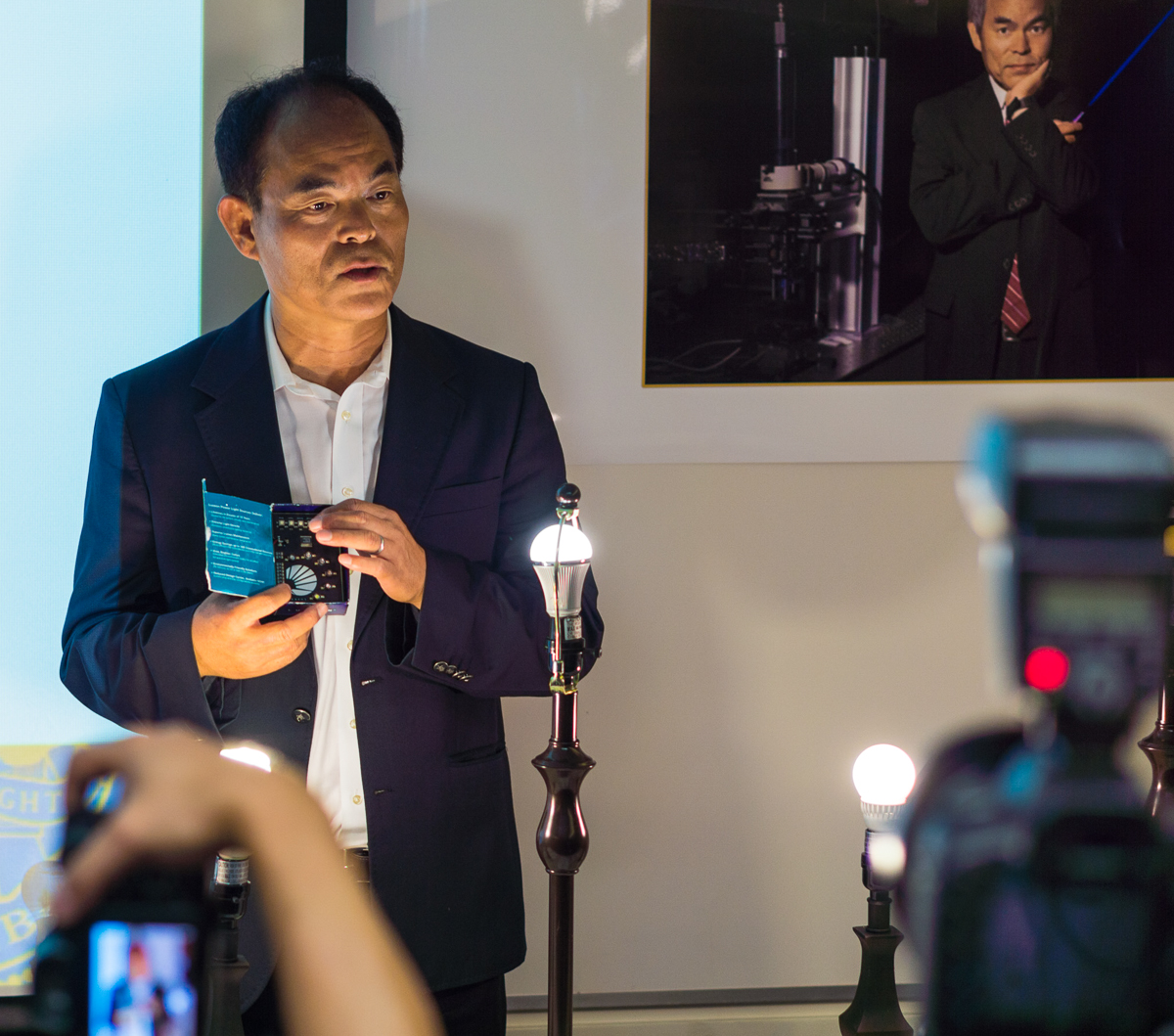 UCSB Materials professor Shuji Nakamura was one of the three physicists who shared a Nobel Prize for the invention of blue light-emitting diodes. The three will travel to Stockholm on Dec. 10 to split the $1.1 million prize. (John Clow/Daily Nexus)

Materials professor Shuji Nakamura was awarded the 2014 Nobel Prize in Physics this morning for the invention of the blue light-emitting diode, or LED, together with Japanese colleagues Isamu Akasaki and Hiroshi Amano.

Nakamura becomes the sixth UCSB faculty member since 1998 with a Nobel Prize to their name. In addition to being dubbed Nobel laureates, Nakamura, Akasaki and Amano will receive equal portions of $1.1 million in prize money. Nakamura and other Nobel recipients, not including the Nobel Peace Prize winner, will travel to Stockholm, Sweden, to receive their award on December 10. The rest of the Nobel Prize award winners will be announced later this week by the Royal Swedish Academy of Sciences.

The early morning celebration for Shuji Nakamura was short but sweet. Umesh Mishra, a professor in the Department of Electrical and Computer Engineering, received a call at 2:45 a.m. from Steven DenBaars, who shares the title of co-director of the Solid State Lighting & Energy Center with Nakamura at UCSB. By around 3 a.m, the three had convened in a campus parking lot with a bottle of non-alcoholic apple cider to toast the most recent achievement of Shuji Nakamura.

Nowadays, we can buy energy efficient LED light bulbs at the supermarket and help reduce energy use. I hope it helps to reduce global warming too. —Shuji Nakamura

Nakamura was born and educated in Japan. After graduating from the University of Tokushima, he went to work at Nichia Corporation, where he, Amano and Akasaki developed the blue LED, before coming to UCSB in 2000. 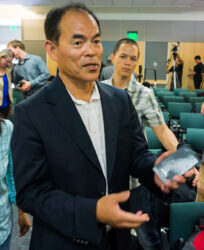 Nakamura speaks with journalists after the conclusion of the press conference, which was held at the Engineering Sciences Building on UCSB campus.
(John Clow/Daily Nexus)

Nakamura said at a press conference this morning that he was excited to be honored for the invention. He also thanked Nobuo Ogawa, the late chairman of Nichia, and his colleagues at the company for their support.

“It also makes me happy to see that my dream of LED lighting has become a reality,” Nakamura said in a statement a press conference this morning. “Nowadays, we can buy energy efficient LED light bulbs at the supermarket and help reduce energy use. I hope it helps to reduce global warming too.”

Nakamura also said he did not anticipate developing the blue LED from the outset of his research but rather started with the goal of simply getting a Ph.D.

DenBaars said Nakamura’s Nobel Prize is well-deserved because it is an important invention to help humans efficiently light up the world.

“The Nobel Prize is given to the invention which has the greatest impact on mankind,” DenBaars said. “It took twenty years to demonstrate that LEDs have a great impact on mankind. You can go today to Costco and buy a LED TV and then go down the street to Home Depot and buy LED light bulbs. Both of those inventions relied on his breakthroughs.”

This Nobel Prize … underscores the paramount importance of research conducted at the University of California. Professor Nakamura’s dedication to science, research and teaching are a hallmark of our public university — Janet Napolitano

Chancellor Henry T. Yang released a statement of congratulations to Nakamura this morning.

“This is a most exciting and joyful day of celebration for all of us at UC Santa Barbara, and for our extended community of scholars, alumni, colleagues, and friends around the world,” Yang said in the statement. “Ever since Shuji’s invention of the blue light-emitting diode and energy-efficient white LED, he and our colleagues have been pioneers not only of a new field of research, but of a scientific revolution. Truly we have just begun to explore the full potential of solid-state lighting and energy technologies.”

Nakamura poses for the media during the press conference. (John Clow/Daily Nexus)

While working for Nichia Corporation, Nakamura discovered the gallium nitride LED which produces a blue light that can be converted to white light using a phosphor coating. This new LED technology is replacing traditional light bulbs and fluorescent tubes worldwide.

“This Nobel Prize … underscores the paramount importance of research conducted at the University of California,” Napolitano said in the statement. “Professor Nakamura’s dedication to science, research and teaching are a hallmark of our public university.”