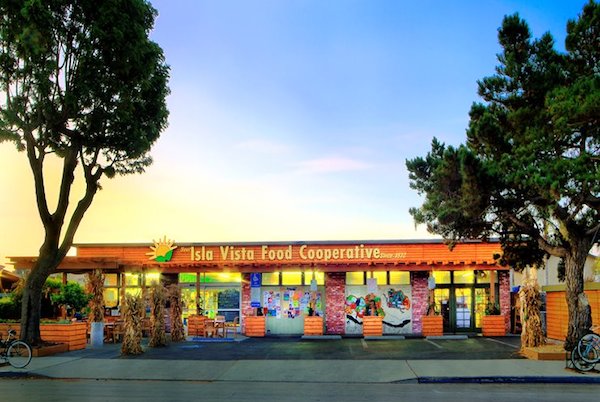 The Isla Vista Food Co-op teamed up with the Associated Students Food Bank to host a community dinner potluck on the Co-op courtyard this past Friday.

The potluck kicked off A.S. Food Bank’s “Hunger Month,” a month long series of events aimed to educate the public about hunger among students and Isla Vista residents. The feast was made possible with contributions not only by the Food Bank and the Co-op, but also by I.V. community members who brought a dish to share. Attendees enjoyed delicious, healthy and organic food as well as live music presented by KCSB.

According to Ashley Audycki, Isla Vista Food Co-op Community Outreach and Education Coordinator, this is the first time the Co-op has had multiple sponsors supporting a community-gathering potluck.

“The Co-op has hosted smaller scale potlucks in the past but this is the first time we have had some sponsors,” Audycki said. “We partnered with the A.S. Food Bank on campus and have been conversing on how we can use food to bring people together and create a sense of community.”

Audycki also said the potluck was organized as an opportunity to inform community members about the food they consume, presenting a mutual ground for people to learn about sustainable, local and organic food as well as offering an introduction to “what kind of different foods are out there.”

“Our potlucks in the past have been great community builders, an outlet to enjoying delicious food and great company, exchanging recipes and often, people leave with a new friend,” Audycki said.

The event also reached out to individuals out of town, including downtown Santa Barbara resident Imke Bomer, who said Friday’s potluck was a perfect environment to have pleasing and meaningful conversations with those of all ages.

“It’s good to talk to the young people here, especially a group of people from such different backgrounds,” Bomer said. “We’ve been chatting about things from this interesting coconut truffle to heritage and community.”

Melvin Singh, A.S. External Vice President of Statewide Affairs, said the potluck was a great way to create a sense of family among Isla Vista residents.

“It offers a space for Isla Vista residents to get to know each [other] and connect in a simple but meaningful way: sharing a meal together,” Singh said. “Furthermore, it would also bring attention to issues community members may have with accessing food. With the Food Bank and the Co-op working together, they can really make something beautiful for the community.”