The Daily Nexus
Opinion
Gun Laws and Culture: Don’t Compare Across the Pond
October 7, 2014 at 2:00 pm by Austin Yack 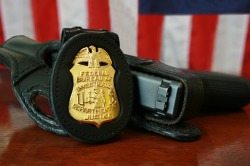 While spending time in the city of Cambridge and traveling around the beautiful country, I saw a strong police presence like there is in the United States. However, officers didn’t carry firearms. Why, then, was there this overwhelming sense of security?

According to Matt White, a student at the University of Cambridge, “I think it’s true that criminals don’t carry guns because police don’t …”

White studied abroad at Massachusetts Institute of Technology last year, and he explains the different attitudes amongst police forces from his home country and the United States. “At MIT I did feel a little more intimidated by the police to be honest. They seemed much more hasty and ready to use force than the British police …”

Of course, knife crime is a rising problem in the United Kingdom and gun control does not stop murder. There is a consensus, however, that people in England don’t feel owning guns is a necessity for their safety. “I think because people grow up without the need for guns or having exposure to them, even criminals see no need to use them,” says White.

One might argue that what is done in England can be imitated in the United States. If this were to occur, drastic measures would be taken that could deteriorate the foundation of our country.

According to U.S. News, “The United States is the only country in the world that treats gun ownership as a fundamental, human right. It’s a privilege — not a right — in every other country but America.”

Americans are raised with the notion that they have the right to bear arms. Furthermore, police officers carry firearms because citizens have the right to own guns. Unless there were to be drastic changes that alter our culture entirely, it is highly unlikely that any police force would relinquish their firearms.

Statistically, it looks as if the United Kingdom’s homicide rate is much lower than the United States. This may be true, but the statistics cannot be equated on the same scale. According to the Crime Prevention Research Center, “Homicides in England and Wales are not counted the same as in other countries. Their homicide numbers ‘exclude any cases which do not result in conviction, or where the person is not prosecuted on grounds of self-defense or otherwise.’”

Although many continue to compare U.K. and U.S. homicide statistics, it is important to consider the difference in statistical analysis and the fact that the U.K. has never placed an emphasis on citizen firearms within their culture. It will be difficult to alter the American notion of freedom and the right to bear arms, and it must be contemplated whether laws that work in one country will work in another.

Austin Yack is fully committed to the saying, “Sun’s out, guns out.”

Views expressed on the opinion page do not necessarily reflect those of the Daily Nexus or UCSB and are primarily submitted by students.

There’s an old book by a former police officer called Colin Greenwood that is entitled: “Firearm Control”. In it he has the Proof House statistics for the 1900s (all guns imported or made for sale in the UK have to be proof tested) and if you look at them, then roughly you can work out that the rate of handgun ownership in the UK in the 1900s was about two-thirds what it was in the US a century later. There were efforts to tighten gun laws in the UK, similar to the US, but what really changed the thinking was… Read more »