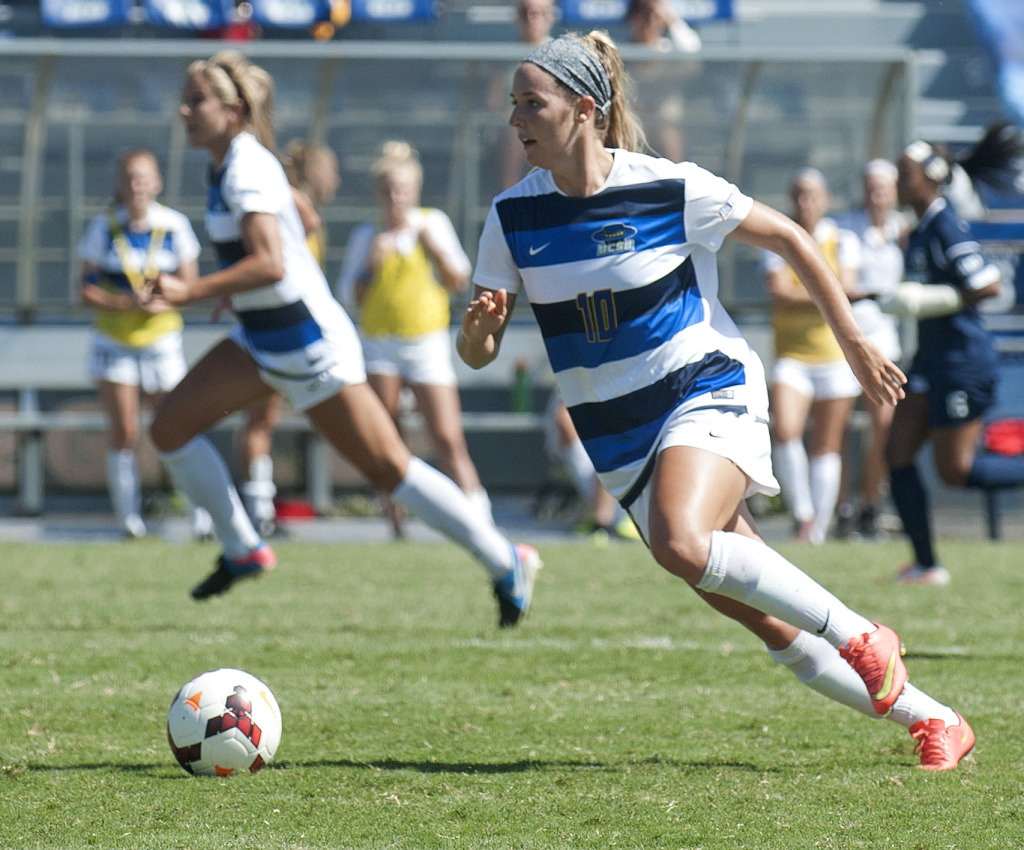 The UCSB women’s soccer team’s four-game winning streak ended with conference losses to CSUN and Long Beach State over the weekend. They will try to reverse their fortunes against Hawai’i on Friday. (Kenneth Song/Daily Nexus)

The UCSB women’s soccer team lost back-to-back games this weekend as it opened up conference play. The Gauchos fell 1-0 to Cal State Northridge on Friday before losing to Long Beach State on Sunday by a final score of 2-0.

Friday’s match centered around tough defense with both teams fighting hard for scoring opportunities. Each side attemptedonly one shot in the first half, as possession seemed to be a key issue.

The only scoring chance for the Gauchos came off a strike by senior midfielder/forward Madison Beckley in the 42nd minute of play. Sophomore midfielder Dakota Griggs provided an exemplary cross to set up Beckley with a shot that ended up sailingover the crossbar.

The second half of the match provided a surge of offense from both teams. With a total of five shots, Cal State Northridge was finally able to break through in the 61st minute. A cross from senior defender Leandra Walker gave senior forward Brittanie Sakajian an opening to place a low ball just beyond the outstretched arms of junior goalkeeper Beth Ritter.

Sophomore goalkeeper Jovani McCaskill came up big for Cal State Northridge tallying four saves and the Matadors defense stopped seven UCSB crosses. Both the Gauchos and the Matadors ended the match with a total of six shots.

With one day of rest, the UCSB women’s soccer team traveled to Long Beach to try to regain the offense prowess that seemed to evade them on Friday. However, it proved to be the 49ers that dominated that side of the ball.

Long Beach scored its first goal early as junior forward Vania Robles knocked in an unassisted goal in the 16th minute of play. The goal marks her third on the season as she is now the second leading scorer on the team behind freshman forward Ashley Gonzales.

Gonzales knocked in her sixth goal of the season in the 81st minute of the match. A red card given to Gaucho freshman midfielder Chace Schornstein provided the 49ers with a penalty kick, which Gonzales comfortably knocked in.

Long Beach State took a total of 11 shots in the game, seven of which were on goal. The Gauchos only managed to take seven shots and a mere three of those were on goal.

Ritter made an impressive five saves in the game for the Gauchos, but the offense continued to struggle and a two-goal deficit proved to be too much to overcome. UCSB will look to get its offensive attack back to form before its next match.

The Gauchos are set to face Hawaii this Friday at 7 p.m. at Harder Stadium.