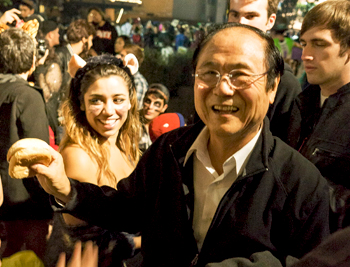 He has advised the Department of Defense, the U.S. Air Force, the U.S. Navy, NASA and the National Science Foundation.

This past year, he finished his term as an elected chairman of the Association of Pacific Rim Universities, which includes 45 of the top research universities across four continents surrounding and within the Pacific Ocean.

Since 2007, he has been the chairman of the Thirty Meter Telescope project, a partnership between the University of California, Caltech and institutions across the globe working to build a telescope 30 meters in diameter in Mauna Kea, Hawaii. He has also guided nine UCSB Ph.D. candidates with research grants from the National Science Foundation.

And for the last 20 years, he has served as chancellor of UCSB.

Henry T. Yang was invited to become UCSB’s fifth chancellor in 1994 after leaving his position as dean of the Schools of Engineering at Purdue University.

“I was honored and pleased to be invited to UC Santa Barbara as … chancellor,” Yang said in an email. “To build a pre-eminent world-class research university with excellence and diversity and with the fulfillment of its responsibilities of teaching, research, and service is a mission that will never end.”

Yang received his bachelor’s degree from National Taiwan University and his Ph.D. from Cornell. According to the Office of the Chancellor, he specializes in aerospace structures, structural dynamics, composite materials, finite elements, transonic aeroelasticity, wind and earthquake structural engineering and intelligent manufacturing systems.

Yang said he took the job with aspirations of continuing and strengthening the university’s tradition of academic excellence and called the job “exciting and rewarding.”

According to Yang, the number of freshman applications has quadrupled from 17,000 in 1994 to 66,800 this year, while the GPA of the entering class has risen from 3.47 to 3.98 in that same period. Earlier this month, U.S. News and World Report ranked UCSB as one of the nation’s top ten public universities.

“Because of him we went from being a backwater UC in 1994 to being one of the top research universities in the world,” Abboud said.

According to Yang, one of the reasons he has remained with UCSB include the university’s election to the Association of American Universities, with five UCSB faculty members and one alumnus winning Nobel Prizes. With characteristic humility, he credits everyone who attends, works at or otherwise contributes to UCSB as grounds for its success.

“With the vision and hard work of our faculty, students, administrators, staff, alumni, and supporters, I have had the tremendous honor and joy of witnessing the exciting growth of UC Santa Barbara,” Yang said in an email.

Abboud, who worked closely with Yang during his time as A.S. president, said although he and the chancellor did not “agree 100 percent on everything,” both shared a mutual respect, especially after dealing with the tumultuous events of last Spring.

“Well I don’t have experience with any other chancellor, but I do know that he has students at the top of his list of priorities,” Abboud said. “If people had a sit-in in his office, instead of run away like other administrators at other campuses do, he would talk to students and try to solve the issue.”

Aside from his administrative responsibilities, Yang also teaches a structural engineering once a year to 50 undergraduates in the College of Engineering. Though Yang holds many accolades under his belt, he said his distinguished teaching award from the UCSB Academic Senate is the award he holds most dear.

“I see him involved a lot,” third-year biology and communication double major Caitlin Weis said. “It seems like he’s more involved with the community than most chancellors.”

Chair of the Mechanical Engineering Department Francesco Bullo said Yang “has a ton of experience, infinite wisdom and positive energy” and for this reason is happy to have him in the department.
“I believe our students love working with him and learning from him,” Bullo said in an email. “He’s always ready with a word of advice and encouragement, and he’s so organized and knowledgeable.”
Indeed, Yang said he is happy to be chancellor.

“I am so honored and pleased to serve UC Santa Barbara, and to witness it growing steadily and exponentially in excellence, diversity, and world-class stature,” he said. “I look forward to many years of working with our faculty, students, staff, and alumni, and to continuing our exciting journey together.”

This story appeared on page 4 of Thursday, September 25, 2014’s print edition of the Daily Nexus.