The Daily Nexus
Outside Opinions
Lean and Green: No Beef with Meatless Mondays
September 25, 2014 at 5:00 am by Eddie Garza 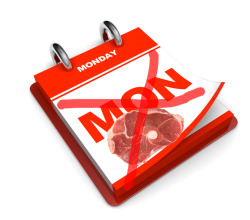 Starting college can be an exciting, yet daunting experience. It’s not surprising that, with all the stress that comes with it, many new students gain the dreaded “freshman fifteen.” A study published in Nutrition Journal found that nearly a quarter of freshmen gain at least five percent of their body weight during their first semester, an average of about ten whopping pounds in just a few months!

In an effort to help students look and feel great, the movement toward offering more plant-based meals is taking root on college campuses nationwide. In fact, there are more than 200 universities leading the charge with Meatless Monday programs in their dining halls.

Why take a weekly holiday from meat? In recent decades, our meat consumption has increased dramatically — and along with it, our waistlines, blood pressure and cholesterol. Meat is high in saturated fat which is associated with obesity and preventable chronic diseases like diabetes, heart disease, some cancers and stroke.

A study by the Johns Hopkins School of Public Health found that there is a strong association between meat consumption and obesity. A review published in the American Journal of Clinical Nutrition concluded, “[A] plant-based diet seems to be a sensible approach for the prevention of obesity[…].”

Even if we can’t switch to a completely plant-based diet, we can make incremental changes. Kaiser Permanente is one of the nation’s largest healthcare and insurance providers. It recently published a “Plant-Based Diet” guide that states: “Any movement toward more plants and fewer animal products can improve your health.”

Eating more healthy, plant-based meals not only helps our physical health, but can also lighten our carbon footprint.

According to the Food and Agriculture Organization of the United Nations, animal agriculture is “one of the top two or three most significant contributors to the most serious environmental problems, at every scale from local to global.” Factory farms — where nearly all of our meat comes from — are major culprits in climate change. These animal factories create huge amounts of manure that pollute the soil, water and air.

And of course reducing the amount of meat we eat is good for animals, too.  The fewer animals we raise for food means less pressure on animal agriculture to raise them in cruel and intensive ways. For example, large demand for meat has led to the practice of genetically manipulating chickens to grow so obese so quickly that many can’t even walk more than a few steps before collapsing. To help animals, the Humane Society of the United States advocates the Three Rs: “reducing” or “replacing” consumption of animal products, and “refining” our diets by switching to products from sources that adhere to higher animal welfare standards.

Thankfully, it’s never been easier to take a positive step toward safeguarding our health while also protecting the planet and helping animals. Choosing simple, delicious options once a week can make a big difference. How about swapping those chicken nuggets with meat-free nuggets? Or choosing veggie and bean burritos instead of carnitas burritos? Eating out is easy, too. With options like Chipotle and Denny’s serving up hearty meat-free fare and with Indian, Thai and Mexican restaurants that regularly offer delicious plant-based dishes, the options are endless.

Eddie Garza is a food policy coordinator for The Humane Society of the United States.

This sound Orwellian. It seems like 1984 is coming a few years late and under the guise of animal protection. If students want to eat vegetarian or even vegan, they have the right to choose. It is not the schools right to compel a lifestyle. National animal rights groups like the HSUS, ASPCA and PETA, like to pretend they follow the principles of Gandhi. In actuality their eastern philosophical hero is Mao Tse-tung. Gandhi, believed in passive resistance and persuasion. Mao believed in an oligarchy controlled by him, that dictated to the masses how to live. Gandhi may have protested… Read more »