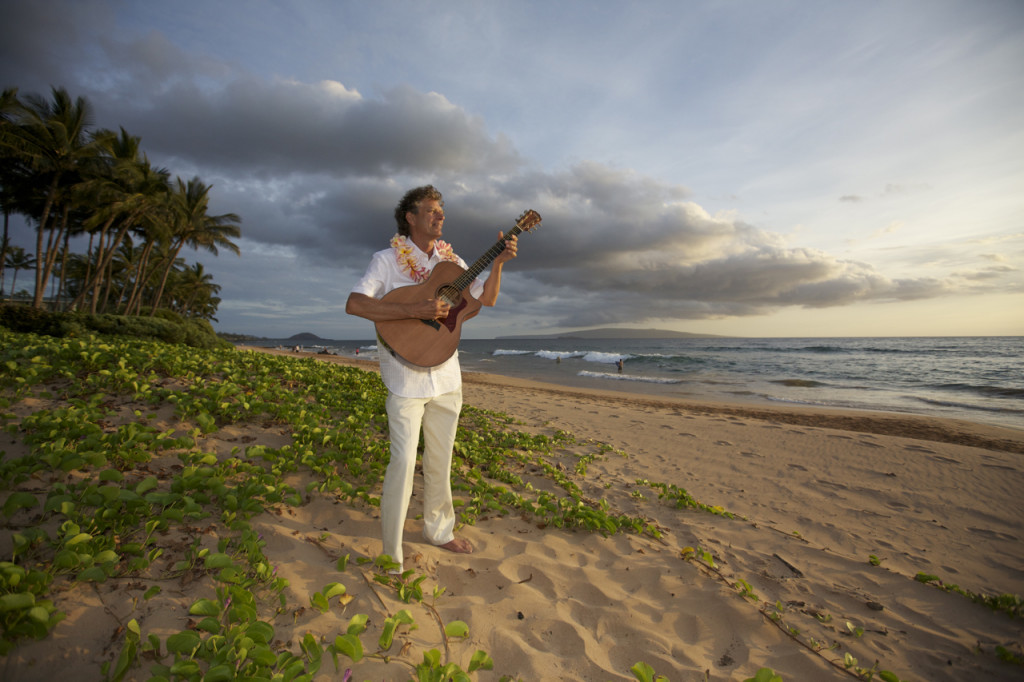 Last Sunday, I journeyed downtown to Santa Barbara’s SOhO Restaurant & Music Club to see Jim “Kimo” West perform traditional Hawaiian slack-key guitar. For the silly mainlanders, slack-key, or ki ho’alu, is a playing style native to Hawai’i dating back to the mid-19th century. It owes its inception to Mexican-Spanish vaqueros that brought cattle and (yep, you guessed it) the first guitars to the small chain of Pacific Islands, or so the oral history goes. And it sounds about exactly how you might expect — cowboy falls asleep in the desert, wakes up on a tropical island, decides to try that coconut-only diet he’s been hearing so much about, learns guitar to play at bonfires — boom! Slack-key. Back in the 80s, something almost as serendipitous happened to James West, and he’s been “Kimo” (the Hawaiian transliteration of Jim) ever since.

While “Kimo” is a pioneering musician in his own right, he is best known for shredding lead guitar for “Weird Al” Yankovic since the early days. Bearing this in mind, I wasn’t sure what I was going to find on the other side of SOhO’s main doorway, a club reputed for bringing the most avant-garde acts of today that your parents have never (and would never want to have) heard of. I half-expected to find a typical American misappropriation of Hawaiian culture in the form of a tourist-style luau populated by retired suburban parents sporting shorts that may have been pulled up a tad higher than is deemed socially acceptable. The other half of me expected a steamy, dimly lit room full of plaid-toting college-aged kids, sporting thick black wireframe glasses. I entered the stage room and, to my delight, my overly cynical predictions were incorrect on almost every account (the crowd was a bit on the older side).

As I scanned the room, I saw Tommy Bahama shirts and dresses worn like uniforms. My eyes caught the wiry curly-haired guitarist from the pictures. He approached me with what might be the warmest “Hey, Alex,” I’ve received since my mom replaced me with a Shih Tzu mutt after I graduated high school. We exchanged the usual pleasantries before he dashed off to get ready for show time.  If anything can be said about “Kimo,” as a person, it’s that he’s an authentically warm guy, a type that I find to be all too uncommon.

I took my seat, and the lights dimmed. He began with a “Hi, I’m ‘Kimo’,” and chatted a bit about slack-key. The first song was just what I expected — slow and entrancing. The song after was of similar taste and tempo. A few songs in, I had mentally prepared myself for an evening of swaying my head from left to right to the soothing melodies of Hawaiian lullabies. He called three dancers on stage. Later in the evening after the show, Jim said to me, ”I always try to bring hula dancers, because it’s such a beautiful dance.” I had never seen live hula, previously.

The next song started slow. The dancers caressed the melody ever so tenderly, their arms faintly resembling small ripples on the surface of a calm lake. “Kimo’s” slender fingers slowly began to accelerate up and down the neck of the golden guitar. His hand moved at breakneck speeds, and the dancers followed suit. I didn’t know whether to watch the undulating hips of the smiling dancers, or this extreme feat of dexterity. Then, he began to sing in crystal clear Hawaiian. For the next two minutes, I was constrained by the tables and chairs occupying what I desperately desired to be a dance floor. Other audience members squirmed in protest.  The song ended with an emphatic sweep of strings and a hearty round of applause.

Jim’s set included astounding variety that kept the show fresh and fun by switching between traditional ki ho’alu standards, covers and original works, all of varying tempo. Additionally, around half of the songs had accompaniment from either hula dancers (one of whom, Nani Edgar, doubled as a vocalist,) another guest vocalist, or fiddle. Also, sprinkled in were fun anecdotes from collaborations with other musicians and factoids about Hawaiian culture. “Did you know the steel guitar originated in Hawai’i?” No, I didn’t. Now, I can make my music snob friends feel dumb. Thanks, Jim!

This show was a breath of fresh air from the indie folk-rock and synth-pop on which I’ve been binging, and the intimate nature of the concert area was a good fit for Jim’s conversational performance style. All in all, if you missed out, then I’m sorry to say it, but you missed out. While Hawaiian folk guitar may be a little down-tempo for some, there’s no disputing it — “Kimo” knows how to wail.

For more information on Jim “Kimo” West, visit his website at http://www.jimkimowest.com/lndex.html.