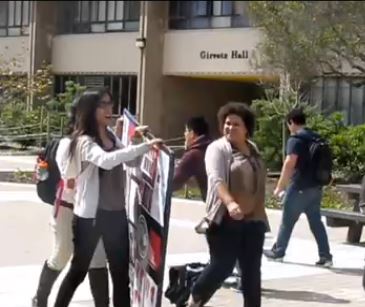 Feminist Studies professor Mireille Miller-Young was sentenced to 108 hours of community service, 10 hours of anger management, three years of probation and was ordered to pay almost $500 of restitution this month after charges prompted by a confrontation between her and an anti-abortion group protesting on campus this past winter quarter.

In March, Miller-Young engaged in a confrontation with pro-life group Survivors of the Abortion Holocaust, who were distributing literature and displaying large signs featuring graphic images of aborted fetuses at the Arbor. The plaintiffs allege the confrontation ended with Miller-Young assaulting 16-year-old Survivors of the Abortion Holocaust member Thrin Short and stealing the group’s sign, to which Miller-Young subsequently plead no contest in July to three charges of misdemeanor battery, grand theft and vandalism.

In the police report, Miller-Young acknowledges that she “probably should not have taken their poster” and later destroy it but “also suggested that the group violated her right,” particularly her “‘personal right to go to work and not be in harm.’” The police report continues, “Miller-Young elaborated that one of the reasons she had felt so alarmed is because she is about to have the test for Down Syndrome” for her unborn child.

According to Penley, the stigma attached to the study of pornography is the result of a lack of knowledge about the subject and its deviation from social norms.
“Let’s just look at it as an industry among other media industries … this puts it in the realm of things that can and should be studied,” Penley said. “There shouldn’t be areas of our culture that we just say we can’t go there.”

There are currently two petitions on Change.org regarding the March incident, one requesting support from Chancellor Henry T. Yang for Miller-Young, and one requesting disciplinary action be taken against her. The Survivors of the Abortion Holocaust petition asks that UCSB conduct a full investigation on Miller-Young’s conduct and enact a disciplinary response that will “restore confidence in UCSB’s commitment to protecting free speech.”

UCSB Vice Chancellor for Student Affairs Michael Young responded to the incident with a letter to the student body stating that “freedom and rights are not situational … we cannot pick and choose what views are allowed to be aired.”

Peter Bonilla, director of campus free speech organization FIRE, or Foundation for Individual Rights in Education, said he interpreted the letter as a condemnation of both the actions of Miller-Young and the Survivors of the Abortion Holocaust and believes the situation should have been handled differently.

[Correction: This article incorrectly referred to People v. Miller-Young as a civil case. That is incorrect, the case was tried as a criminal case.]

This story appeared on Wednesday, August 27, 2014’s print edition of the Daily Nexus.

“There shouldn’t be areas of our culture that we just say we can’t go there.”

But isn’t that exactly what Professor Miller-Young was doing?

I am happy with her punishment. Its not too severe and it’s not a slap on the wrist. It should serve as a sign that regular society won’t put up with the hypocritical antics that these extremely polarized individuals feel they can inflict on us. She may feel like she is a god in her classroom, immersed in the support and adulation of the young ladies she has corrupted, but the rest of the country expects her to use courtesy and common sense in what she does when she is off university grounds.