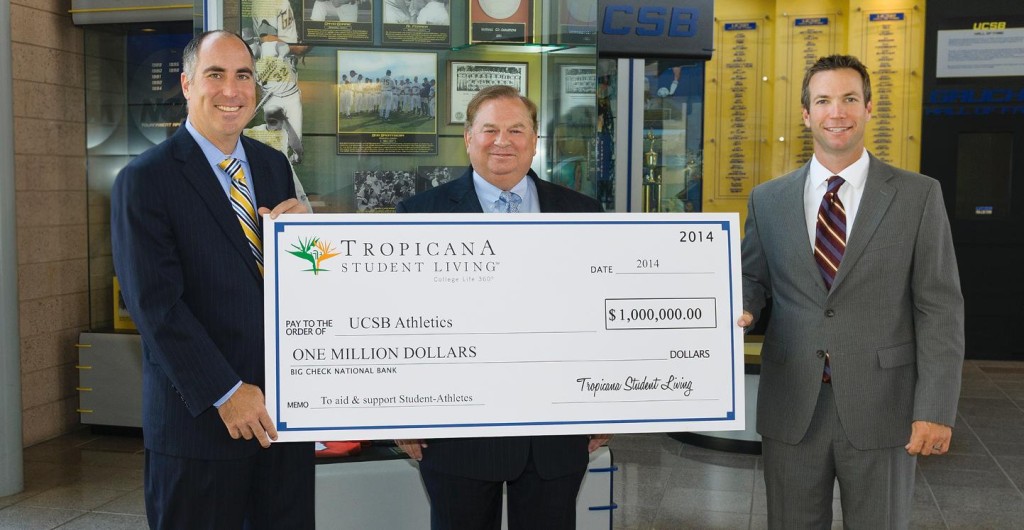 Kent Dunn (center) presents a donation check to Mark Massari (left) and Andrew Checketts (right). The money will be gifted to various UCSB athletic programs in annual installments over 10 years.

Tropicana Student Living announced last week it would be donating $1 million to UCSB Athletics in a series of annual installments of $100,000 over the course of ten years, beginning with $100,000 for the 2013-14 academic year.

This year’s donation will go toward supporting the baseball program, including a planned Gaucho Park entry plaza at Caesar Uyesaka Stadium. Future payments will be allocated to 20 intercollegiate athletic programs under the discretion of outgoing Athletic Director Mark Massari as a part of The Campaign for UCSB, a fundraising initiative to raise $1 billion dollars for university programs, staff, faculty, scholarships and buildings.

According to Associate Vice Chancellor for Development Beverly Colgate, the campaign has already surpassed $844 million in funds raised, and this is the first instance in which a housing provider has made a financial donation to the university.

“Any gift of private support to any area of campus is considered part of our campaign,” Colgate said in an email. “This is the first gift to UC Santa Barbara, that I know of, from a housing provider.”

Colgate however said it is not unusual for the university to receive significant donations from private businesses, with gifts coming from a variety of different groups and people.

“We receive gifts at varied levels from private companies annually,” Colgate said in an email. “Our gifts come from individuals, foundations and corporations, companies [and] organizations.”

The $1 million donation was the product of an extended period of coordination between UCSB Athletics and Campaign for UCSB donors, according to Colgate.
“The initiative for this donation came out of the Intercollegiate Athletics Department, as they had the ongoing relationship with the donor,” Colgate said.
According to Kent Dunn, managing principal of Tropicana Student Living, the donation had been in the works for nearly two years and the decision to support UCSB Athletics was based specifically on Tropicana’s history as the “Official Student Housing Sponsor of UCSB Athletics.”

“Since 2005 Tropicana Student Living has housed many UCSB athletes during the academic year and thousands of UCSB Athletic summer campers during the summer,” Dunn said in an email.

An apparent shortfall in many athletic program budgets also encouraged Tropicana’s decision to commit $1 million over ten years, Dunn said.
“Many UCSB athletic teams are developing nationally recognized programs and their facilities are in need of refurbishment or replacement,” Dunn said in an email. “With budgetary challenges, funds necessary for these projects have not been available.”

Dunn also said the benefits of promoting a successful athletic program would not be limited to students directly involved with UCSB Athletics.

“A robust athletic program will provide students with venues to enjoy high quality sporting events in the context of their campus life experiences and an avenue for the school’s reputation to grow in national prominence in other areas,” Dunn said in an email.

A version of this story appeared on page 3 of Wednesday, June 25, 2014’s print edition of the Daily Nexus.