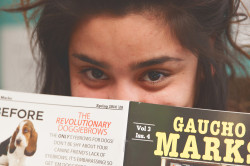 I recently spoke to my friend Mathew Javidi about his final issue of Gaucho Marks, the UCSB satire magazine that has been going strong since he founded it three years ago.  The most recent issue is available in CCS as well as throughout I.V. and in the dorms.

Artsweek: I was really impressed with the issue, first of all. Did you have an expectation of where this would go when you started it? Did you expect it to last this long and become the publication that it did?

Mathew Javidi: When I was a second-year, when I started this, I had really grand aspirations for it. I wanted to get a KCSB show for Gaucho Marks, I wanted to have a video department for Gaucho Marks … My focus kind of narrowed and I thought, ‘Well, I have to learn how to do this first.’ I really got to focus on being a better magazine editor … so I’m really pleased that we’ve come that far.

A: Yeah, in three years I think you’ve really accomplished a lot. So that was my next question — What do you feel you’ve learned from the process of starting your own publication and keeping it running for three years?

MJ: First of all, I have a newfound appreciation for campus media. You’re not just journalists or writers trying to do a publication: You’re students first, and usually student-workers … It is so much of a time commitment.
Also, I’ve really learned how to impart a vision on people. It’s hard to explain but … as an editor, it’s your job to train the people writing for you … It really showed me how to teach what I’m doing, and that led me to my minor in teaching, which might be a career path for me.

A: Were you at all afraid to start the magazine?

MJ: Well, one of the things that I was afraid of from the very beginning was, obviously, ‘Are we going to get shut down for saying certain things?’ But I spoke to Don Lubach at the Office of Student Life and he told me that the Vice Chancellor [Michael Young] is an adamant defender of free speech — and that helped a lot.

As far as being afraid of being overwhelmed … I’m not that kind of person. I’m the kind of person who will actually bite off more than I can chew and then … awkwardly spit some of the pieces in the mouths of other people, to help me chew it.

You have to depend on other people, because trying to do it all yourself will end up in both a bad product and a serious case of depression.

I was scared that it would fail … but there were certain people like our faculty advisor Kay Young or Don Lubach who helped affirm that this was a good idea and that we should be doing this.

A: Were there any articles that made you nervous to publish or that you hesitated to publish?

The people who make themselves public figures and who open themselves up to ridicule, we have no problem of making fun of them. But typical students, people who clearly don’t need to be victimized by a satire magazine — or anything — we’re not going to use their real name.

The cool thing is that we have [faculty advisor] Kay Young. If we aren’t sure about an article, we can send it to Kay and she can give it a once-over and we usually go with what she says.

A: When I was reading your AMA from a few weeks ago, I almost posted a question but I thought you answered it really well, and that was basically about how you deal with approaching controversy. I wanted to know why you think it’s important to risk offense. I’m assuming there’s more to it than making people laugh because there are a lot of ways to make people laugh. So what is the importance of satire in your opinion?

If you look on Reddit’s comments for the “Queer Spanish Teacher” article, or the “Sexual Assault Victims” article, what they do is they start conversations about how terrible these problems are and that’s what we want. We want people to read the article and say, “Yeah, that sucks. That’s fucked up” and to think about a solution.

Satire isn’t meant to come up with the solution but to expose the problem. It’s meant to ease the tension of it so you can be angry — or laugh — and get out the tension, catch your breath and decide to do something about it.

A: Can you tell me anything funny from behind-the-scenes of the making of this issue?

MJ: Okay. My layout editor — a guy named Rob — he doesn’t write for units. He asked for his payment — his salary if you will — and he has one of the hardest jobs, and the only thing that he asked for was a handle of Evan Williams. And that’s also what he asked for for the last issue.

It’s interesting because I have to give all these kids grades, and I have to make sure they meet deadlines for all the assignments, and all that kid needs — I mean really, he has to do a huge job — and all he wants is a bottle of Evan Williams whiskey.

A: So my last question is: Is “In-Snape-tion” available anywhere online?

MJ: [Laughs] Okay. It is. But I’d have to give you my personal Reddit username … I posted it on a thread of “Stupid things you did for love.” Is this part of the actual interview by the way?

MJ: Okay. Do I have to give actual context for this?

CONTEXT: Matt was supposed to see Inception with this girl he liked in high school and saw it without her. To make it up to her, he wrote her a Harry Potter/Inception crossover musical, complete with original songs. InSnapeTion.

MJ: Here’s the thing about this musical. I wrote all of the lyrics. I created a bunch of song demos for it. But I never got the chance to fully complete it to a polished product. I uploaded a few of the demos to SoundCloud and a pdf of the script … So it’s on there. And then somebody gave me Reddit gold! And it was the happiest day of my life.

If you wanna find it, good luck to you. It probably isn’t going to be that hard, but don’t publish my username if you figure it out.

Artsweek: I will take that challenge.

A version of this story appeared on page 13 of Thursday, June 5, 2014′s print edition of the Daily Nexus.