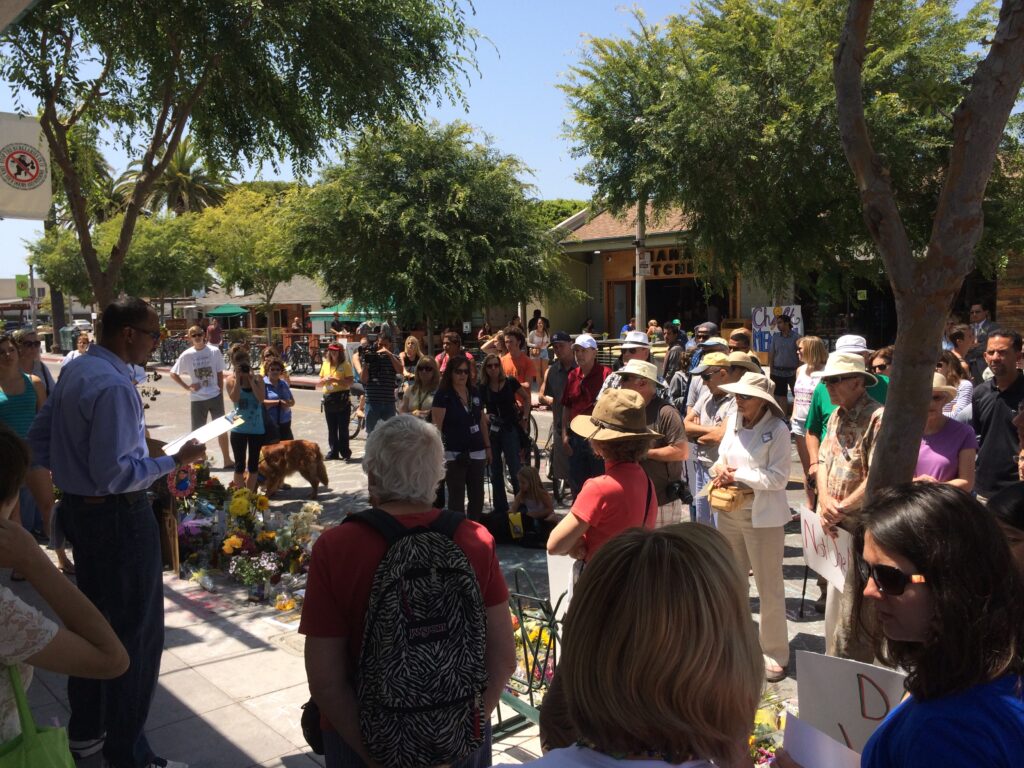 A spokesperson for State Senator Hannah Beth-Jackson addresses the crowd.

Students, locals and members of nonprofit organizations gathered in front of I.V. Deli Mart Saturday to protest gun violence for the #NotOneMore campaign, a gun control movement started by Richard Martinez, father of Christopher Ross Michaels-Martinez, a victim of the May 23 Isla Vista mass murder.

Around one hundred attendees walked from I.V. Deli Mart to the killer’s apartment complex to the Alpha Phi sorority house and finally back to I.V. Deli Mart. During the march, campaigners listened as the names of those killed in each spot were read, shouting “Not one more!” after each name.

According to Lonnie Phillips with the Brady Campaign to Prevent Gun Violence, the #NotOneMore campaign has amassed a following of nearly 1.5 million people.

Allie Clement, a UCSB alumna and spokeswoman for the Brady Campaign to Prevent Gun Violence, said she was upset when she heard about the mass murder in Isla Vista but has channeled that emotion into trying to ensure such events do not happen again.

“I really feel like this is my other home, and I was completely devastated when I heard that this happened,” Clement said. “Now I’m even more motivated to want to make a difference and to help other young people feel like they can do something.”

According to Clement, the Brady Campaign to Prevent Gun Violence is striving to sign mandated background checks into law.

“Right now, on a federal level, only sales that go through a federally licensed firearms dealer have a background check,” Clement said. “Private sales don’t have background checks, so it’s basically closing loopholes so that felons and the dangerously mentally ill can’t get firearms.”

While gun control activists hope to push through legislation to tighten firearm laws nationwide, Clement also said the goal is not to restrict the Second Amendment but rather to restrict firearm accessibility through stricter background checks for safety purposes.

“No one’s talking about banning guns or taking away anyone’s rights but just making sure that people who really shouldn’t have a gun aren’t able to get one,” Clement said.

Sandy Phillips, a Campaign Manager for the Brady Campaign to Prevent Gun Violence, said she helped to organize the rally in part to show her support for Richard Martinez.

“He’s using his voice, he’s saying what needs to be said, and he’s angry,” Phillips said. “We need to get angry and say, ‘This is not okay. It ends today.’”

Prior to the walk through Isla Vista, Deputy District Director for Senator Hannah-Beth Jackson, James Joyce III, spoke on the behalf of the senator, who was not able to attend.

“Her belief is that we need to focus on effectively treating mental illness, preventing violence, and keeping guns out of the hands of the wrong people so that our communities are safe,” Joyce said.

According to Joyce, this past Tuesday Senator Jackson joined with Assemblymembers Das Williams and Nancy Skinner to co-author a bill to create a “gun-violence restraining order.”

“[A gun violence restraining order] would establish a way for concerned family members and friends to note by law enforcement if someone is demonstrating violence towards themselves or others,” Joyce said.

According to Joyce, one of Senator Jackson’s long-term goals is to de-stigmatize mental illness by addressing it as early as possible. Joyce also said Jackson hopes to redefine the gun debate and has said “time and time again” that the Second Amendment “is not an unfettered right.”

Kerina Yao, a third-year biopsychology major, said she thinks this effort to strengthen gun control laws is an appropriate response to the events of May 23.

“There are counterarguments saying that guns don’t kill people, people kill people,” Yao said. “But obviously guns is an easier way to do it, impersonal.”

Katherine Clark, a third-year communication and sociology double major who knew Katherine Cooper, one of the victims of the shootings, said she felt the rally helped her cope with the “shock and numbness” and grief that “comes in waves.”

“I think it’s really important for the students to support the victims, and for some people, that’s attending rallies like this,” Clark said. “A few years ago, I was supportive of gun rights, but the past few years and especially this has completely changed that.”

Clark said this change occurred after following various news sources and observing similar tragedies. In addition, her experience studying abroad was has caused her to critically view America’s attitude towards guns, she said.

“Just talking to people from all over the world, it’s ridiculous, the problems that we have here, meaning America’s fascination with guns,” Clark said. “That doesn’t exist elsewhere, and just hearing other people’s perspectives too really makes you look at the U.S. with a different lens.”

I think it would be far easier to segregate the odd, weird and violence prone from society than to try and limit guns. It is far easier to brand and track people than guns.

I am not speaking against stricter gun control but do we honestly think stricter gun laws will keep guns out of the hands of criminals. Do we really think thugs and gang bangers are buying their firearms at the local fish and game store? Are we just making it harder for responsible citizens to protect themselves? What do you all think?

No rally for the victims who were hacked to death with knives and a machete? No national organization to demonize people who own, use and collect knives? No campaign to require background checks prior to purchase? No proposed laws for “knife owner” restraining orders?

They have them in England (where they’ve banned all the guns….)

We’re just making it harder for good people to purchase handguns. I hear what they are saying about closing loopholes but lets be honest… we’ll spend millions in creating the law but their will be zero enforcement AND criminals will still buy their weapons under the table. Felons already cannot be in possession of a firearm so why spend the money and energy in those kinds of new laws? We should divert all the money and energy in mental health or mental health laws.

I’m wondering how our already strict gun laws in CA may have contributed to saving lives in this situation. Can you imagine if the shooter had been able to get his hands on much more dangerous guns like those used in other mass shootings than the hand guns used in this case? I know there is no way to show if this was the case, but it really makes me think.

Just a guess… he chose handguns on purpose. Very difficult to shoot from a moving vehicle with a rifle. He had opportunities to get a rifle and didn’t.

No no no … many were saved because it was easier to get a handgun than a AK.

Very difficult to shoot a hand gun from a moving vehicle too. The only people killed were shot while he was out of the vehicle.

And wasn’t his initial plan to go into a sorority house? This is all speculation and I have not idea how anyone would be able to look into this. I’m sure someone out there has tried to publish a study on this.

So why aren’t they being careful to leave guns in the hands of the law abiding while trying to take away from criminals and the insane?