Wednesday night’s Associated Student Senate meeting, the first to be held by the newly elected senate for the 2014 to 2015 academic school year, focused on the mass shooting that occurred Friday night in Isla Vista.

A.S. executive officers gave reports on efforts being made to establish memorials and help students to heal, as well as failures in the alert system responsible for warning students. Director of Community Affairs Aaron Jones reported on the successful efforts coordinated by A.S. executive officers to construct a board for students and community members to share thoughts and feelings.

Jones said the board has received non-stop participation, particularly after media coverage in Isla Vista has subsided.

“It’s a really, really beautiful thing,” Jones said. “We spent all day yesterday and today out there. It’s been a constant flow of students [and] community leaders … who are just coming forth, looking at it, participating, adding thoughts.”

Internal Vice President Angela Lau said she had been working on several events to help students to heal from the recent tragedy.

“We’ve been working non-stop from Saturday on the candle light vigil, the memorial and other projects of healing on our campus,” Lau said.

External Vice President of Statewide Affairs Melvin Singh discussed some of the problems that occurred with the UCSB emergency email message system on the Friday night of the shootings. Singh said Santa Barbara County Sheriff Bill Brown attempted to make excuses for the delayed warnings students received that evening.

“He tried to make an excuse and said something along the lines of ‘There was a safety concern, we didn’t want people to panic,’” Singh said. “To me, speaking personally, this kind of concerns me because this alert system is made for us to be notified for something like this going on.”

Singh said students frequently receive alerts and warnings about relatively unimportant happenings.
“We get police alerts all the time for smaller stuff but we don’t get it when something like this happens,” Singh said.

Singh also said students should make a concerted effort to be aware of issues related to gun legislation.
“With everything that’s been happening, just keep an eye on what’s going on with gun law legislations,” Singh said. “I know that’s been really big, especially yesterday with the memorial. Today, Das Williams proposed his legislation and it was on CNN, so keep an eye on it. It’s something that’s relevant to our community.”

Several different A.S. executive officers made efforts to reach out to senators to provide emotional support.
A.S. President Ali Guthy said she appreciated community efforts over the last week and would be available as a resource to senators and students.

“I know it’s been a really rough week, and the amount of support we’ve been giving each other as a community has really been inspiring,” Guthy said. “I love you all. If you need anything I’m here as a resource.”

Other topics discussed included debate over Senate approval of staff positions for A.S. executives, planned study jams this evening at the A.S. Annex that will provide free food for students, a bill to create a commemorative memorial plaque for the victims of the shooting and the unanimous passage of a resolution to encourage more socially responsible investments by the UC, which had previously been passed unanimously by the outgoing Senate.

[Correction: Due to a technical error, this article previously contained content unrelated to this article. That section has been removed. ] 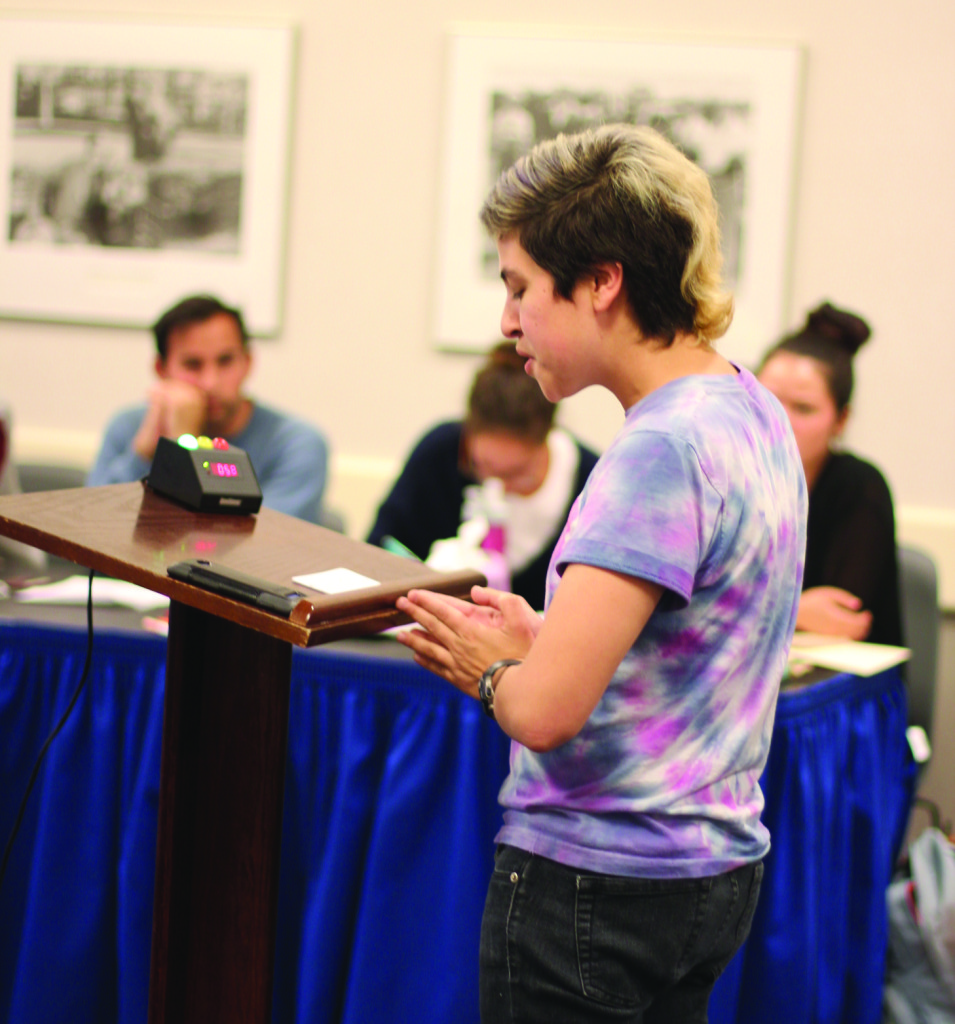 A version of this article appeared on page 3 of the Thursday, May 29 2014 print edition of the Daily Nexus.