The Daily Nexus
News
I.V. Deli Reopens in Aftermath of Tragedy
May 26, 2014 at 8:45 pm by Patrick Kulp and Erika Martin 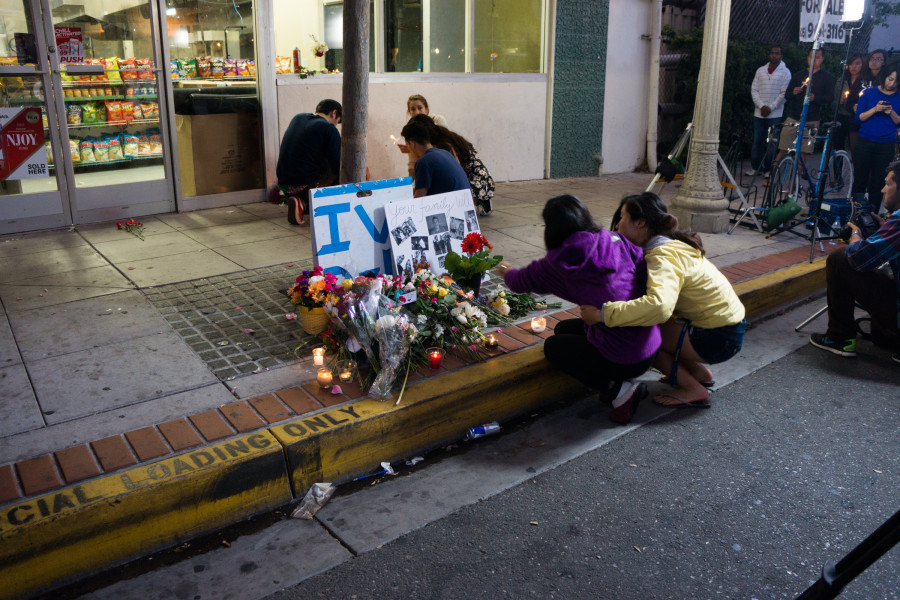 A memorial marks the scene of the shooting. (Daily Nexus / John Clow)

With the blood cleaned from the floor and flowers masking bullet holes in the windows, I.V. Deli Mart returned to business as usual Sunday afternoon, a day and a half after Christopher Michaels-Martinez was murdered inside the store.

“As much as our hearts are broken, it’s time to move on and be strong,” owner Sam Hassan said. “If you fall down, just get up, lick your wounds and keep going. That’s how you defeat the evil of what happened here.”

Sam and his son Michael Hassan, who have owned the business together for 12 years, were devastated when students they knew personally were senselessly killed Friday night. The owners said they are organizing a memorial fundraiser later this week and eventually plan to establish a scholarship in Martinez’s name for underprivileged students.

“They’d come in the store; we’d joke with them, laugh with them. We feel like we are part of a family, like everybody else in town,” Sam said. “It’s like you lost a kid, you know? It’s our kids.”

A popular location on Isla Vista’s busiest commercial street, I.V. Deli relocated to a larger building next door to its previous space in early April to accommodate heavy foot traffic.

“I saw there was, what, 4,000 people at the vigil? Looking around, half of them were people I see around the store all the time,” Michael said.

After the shooter fired seven shots into the storefront from his black BMW, the store’s surveillance video shows that Martinez lay bleeding on the floor for 20 minutes before an ambulance was able to respond, Sam said. Officers were on the scene within minutes, but left before paramedics arrived, presumably to assist at one of 11 other crime scenes.

Alyssa Hopper, a second-year philosophy major, said police began performing CPR but then asked a bystander to take over, and she stepped up.

“I was in complete instinct-mode,” said Hopper, who has been a lifeguard for five years and could readily perform CPR. “I was at the right place at the wrong time.”

Meanwhile, Sam and Michael rushed to their store. The  manager-on-duty had alerted them right after calling 9-1-1, Sam said.

“Somebody died in there on the floor. We saw the footage of that, and it was horrible,” Sam said.

The next day, mourners left flowers and candles in front of the store to commemorate the victims, whose identities had yet to be confirmed. As a crowd gathered outside, employees were left with the task of mopping up blood and sterilizing shelves.

A flock of reporters and videographers from outlets all over the world have been camped out around the building since Saturday morning. Sam said the media presence prevented shipments from being delivered.

“There’s too many, and they’ve been here now for three days. People sometimes want to have a minute by themselves here, and they don’t have it because there’s no privacy,” said Sam, who repeatedly requested that news vans vacate the adjacent parking lot.

“People want to move on, but there’s a camera in their face.”

Once Martinez was identified as the victim, his father, Richard Martinez, stopped by the store and dropped off pictures for the memorial, Sam said. He said he admires Richard’s appeal to lawmakers for tighter gun control, adding that skewed political priorities are also part of the problem.

“The government puts too much [funding] in weapons and not enough in education and social services,” Sam said. “That’s what it is, we don’t have a government working for us.”

As a father himself, Sam said he cannot imagine what Richard is going though.

“It’s a horrible thing,” Sam said. “You can’t even sleep if your kid has a fever. How about if he dies? It’s really, really hard and I hope they have the strength to stand up and keep going.”

Carrissa Quiambao contributed to this article. Erika Martin is a 2012 Nexus alum and Special Reports Editor at the Pacific Coast Business Times.

Read more:
–Elliot Rodger’s run-ins with law enforcement point to a troubled past

–Interactive map of the crime scenes