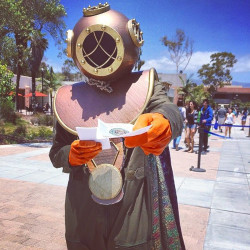 Brought to you by a dedicated crew within the Film & Media Studies Department, Reel Loud is a silent short film fest that has become a beloved campus tradition. Known for its variety of skillful student films and quirky combination of silent films with live musical accompaniment, plus a variety of performances and visual art, this annual event is a live show unlike any other.

This year’s Reel Loud is only the second in the history of the festival to allow digital film entries.  Festival Director and third-year Film & Media Studies major Sam Lerner explained that this has opened up possibilities for filmmakers. Out of the many entries received, 14 films, each ranging from about six to seven minutes in length, were selected to be screened this year.

The subject matter of the films tends to be quite varied, but each year the festival announces a theme that filmmakers can choose to use as a source of inspiration if they like. This year, Lerner decided on “Choose Your Own Adventure” as the overarching theme for the festival.

Lerner explained that the idea came from his own love for genre-blending and adventure films, books and television. He admitted that it was also a good theme for the event since it gave filmmakers a lot of flexibility to work within the theme.

“I really love anything that has to do with adventure (secret tunnels, swords, dinosaurs), and it seems like adventure movies are pretty universally beloved (who doesn’t like a little Indiana Jones?),” Lerner said in an interview via email. “I felt that having a theme called ‘Choose Your Own Adventure,’ would allow us to work with a really fun genre, and it brought about so many different creative opportunities for the rest of the committee and the filmmakers in terms of interpreting ‘adventure.’”

After speaking to Lerner several times throughout the year (the festival is a big undertaking, and planning for this festival began almost immediately after last year’s show ended), it’s clear that Reel Loud has been a labor of love. Lerner explained that he knew it was an enormous assignment but that it’s been an enjoyable one, largely thanks to his crew.

“I’ve really had a great time being faced with this giant, singular task: ‘Make Reel Loud happen,’ and then breaking it down into smaller and smaller components like assembling a team and getting art, publicity, and a website all together (to name a few things),” Lerner said. “This team has been the most talented and dependable group I’ve ever worked with, and everything that’s gone into this festival is thanks to them.”

Lerner enjoys the problem-solving aspect of directing the festival, but he also recognized the less-than-glamorous parts of putting together a big event.
“The hardest thing has been the word ‘no,’” Lerner said. “There’s a lot of ‘no’ when you’re working with entities who don’t know who you are, or what group you’re representing, even if you have the best of intentions when asking for their help. Sometimes we received the help we’ve needed, and other times we’ve just had to move on.”

Overall, it seems that the crew has had a good attitude about getting the job done. They are determined to put together the best festival they can. This year’s event will include performances by Naked Voices, Urban Dance Company and indie band A Yawn Worth Yelling, plus some carnival-esque raffle action and “adventure-themed backdrops” for photos before the show, and, of course, plenty of film magic.

Reel Loud comes around just once a year and is not to be missed. Come see what adventures this year’s filmmakers, performers and organizers have orchestrated for you. You can read all about it next week, but nothing can beat seeing these performances for yourself as they were meant to be seen — live.

For pre-sale tickets, check out www.reel-loud.com. Tickets are also available at the door.

A version of this story appeared on page 8 of Thursday, May 22, 2014′s print edition of the Daily Nexus.