The Daily Nexus
News
Supreme Leader of Nexus Arises
May 21, 2014 at 5:00 am by Peter Mounteer and Aditya Tadanki

Newly-Elected Editor in Chief Shall Usher In New Era of Journalistic Excellence, Badassery

The Daily Nexus editorial staff elected former news editor Carissa Quiambao as editor in chief for the 2014-2015 academic year in an office-wide election last Thursday.
Quiambao, a third-year political science major and former news editor, ran against outgoing managing editor and third-year psychology major Rilla Peng, both having been involved with the Nexus since the beginning of their freshman year. Quiambao prevailed over Peng in a close vote after the two gave separate interviews before the UCSB Press Council earlier during the week, and will officially take over for outgoing editor in chief Marissa Wenzke beginning next week.
Quiambao joined the Nexus the first week of Fall 2011 and went on to become an assistant news editor the following year. She became news editor during Spring Quarter last year but briefly stepped down from the position at the end of winter to focus on her studies. Quiambao said she felt very privileged to have the opportunity to lead the Nexus.
“I felt as though I had dived into a realm of deep profound meaning and beauty and excellence and prestige,” Quiambao said. “I felt as though the universe bestowed upon me a crown of badassery.”
Quiambao said she understands the difficult nature of the journalism world and is ready to go above and beyond the call of duty.
“I feel like I have a very long and probably tumultuous road ahead of me, but I am more than excited to take it on and to fuck shit up on the way,” Quiambao said. “Along with fucking certain things up, to hopefully helping and uplifting problems, and things that are broken in the university and in the world.”
Quiambao also said she hopes to honor Nexus alumni by continuing the newspaper tradition of providing honest news.
“I really hope to continue the Nexus’s direction toward being UCSB’s shining gem of truth,” Quiambao said. “I hope to be able to live up to my predecessors, who have all been amazingly inspiring people.”
As the new editor in chief, Quiambao said she want to focus her attention on further bringing the Nexus into the modern age of journalism by taking full advantage of tools such as the web.
“I definitely plan to be at the forefront of the change from print journalism to online,” Quiambao said. “I recognize that print journalism is kind of dying, but journalism in itself will never die. It’s just moving in a different direction. … But I definitely want to focus more on online, and making online more dynamic.”
Fourth-year political science major and outgoing editor in chief Marissa Wenzke said she has faith in Quiambao’s abilities and the future of the Nexus.
“I feel confident in the welfare of the paper because I think she’s not only qualified, but the perfect person to do it,” Wenzke said. “She’s been with us for several years and has shown her commitment to the paper. I know that as EIC that level of commitment and passion will only grow.”
According to Wenzke, Quiambao has all the skills necessary to help the newspaper succeed because of the effort she put into her work in the past.
“She brings passion combined with experience,” Wenzke said. “That’s probably the best way of putting it. She has definitely proven herself. She’s a talented editor, good writer, hard worker and a great journalist.”
Peng, the other candidate for the position, said she was disappointed with the election’s outcome, but believes the Nexus will be in capable hands. “Of course I felt bummed,” Peng said. “I had my own set of visions and goals that were different from Carissa’s. I’m sad that I wasn’t able to get the opportunity to implement those changes, but honestly I feel our overarching goals are very similar. I think she’ll do a good job trying to improve the Nexus.”
Second-year English major and former assistant news editor Hannah Nelson said her time working with Quiambao has proven her to be a dedicated member of the team, willing to go to great lengths to publish a quality paper.
“Carissa is not only a talented writer but also knows how to get things done,” Nelson said in an email. “A lot of editors, they stay until one, two [in] the morning working to make sure there’s a paper the next day, and Carissa was one of them. She loves the Nexus. She always said there’s nothing that can keep her away from it.”
Third-year hydrology major and Nexus copy reader Kimberly Yom said in addition to being a capable editor, Quiambao is respected for her talents outside of editing.
“I only know three things about Carissa: She’s smart, she’s musical and she has eyeliner game too strong to handle,” Yom said. “I think it gives her superpowers.”
According to Quiambao, earning the position of editor in chief is one of the highest honors she has received.
“I’ve been dreaming my whole college career to take the helm of this beautiful wondrous masthead, and my wildest dreams have finally come true,” Quiambao said. “It’s great. It’s awesome.” 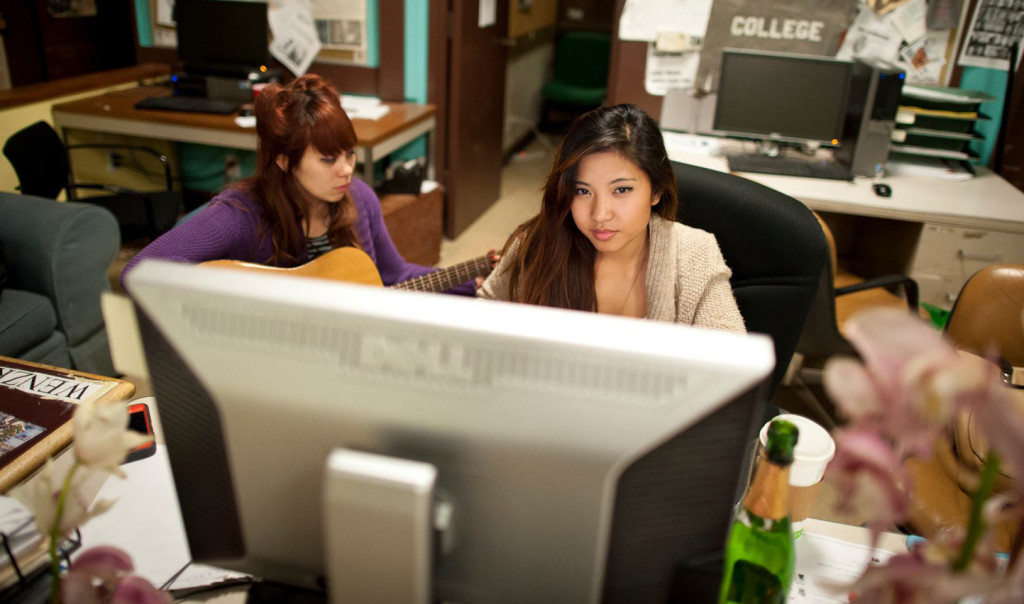 A version of this story appeared on page 1 of Wednesday, May 21, 2014’s print edition of the Daily Nexus.

Daily Nexus may be ranked in the top 10 college newspapers in the Princeton Review but your newspaper is still a subordinate and opinionated garbage. Please stop pretending to be “journalists”.

The article about the new chief has always been tongue in cheek. Overall, I think they do a pretty good job. Not perfect, but definitely worthy of that Princeton Review title, especially if you have read some of the other colleges’ papers.