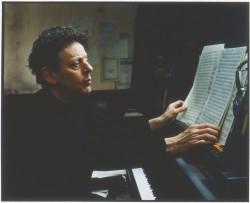 Cocteau’s masterpiece, “La Belle et La Bête,” was originally released in 1946. Its deeply romantic and personal narrative has influenced millions of people, including audience member Paule McPherson. McPherson saw the film 64 years ago while she was a student in London. She was filled with emotion and fought back tears as she described how moved she was after the evening’s performance. She was 16 the first time she saw the film, and has loved it ever since. She loved the combination of Cocteau’s film and Glass’s score because it was so unusual.

“It was more than I could have possibly imagined. The whole idea is so unusual … I was a bit worried; I don’t know much about Philip Glass at all,” McPherson said. “It was just like the film, that wonderful romantic feeling, and also the tension and drama. I haven’t seen the film all together since all those years ago. It’s always been in my mind; it’s one of my favorite films of all time. Philip Glass really came through tonight, I think it was marvelous.”

The Philip Glass Ensemble is conducted by Michael Riesman, and features the talents of Hai-Ting Chinn as La Bête, soprano Marie Mascari as La Belle, and baritones Gregory Purnhagen and Peter Stewart in supporting roles. The singing was performed in French, with English subtitles accompanying the film.

Dan Najera, who attended Brooks Institute and works in audio and video production, is familiar with Glass’s work and appreciates the effort the musicians and singers made to achieve this success.

“Philip Glass is a master at scoring great films and to do a classic film like this was really ambitious,” Najera said. “I really appreciated his effort and the musicians and opera singers were amazing. He has a style that you can hear, and once you hear it you know it’s Philip Glass. It’s like riding a ship, going on a journey. With or without Philip Glass’s soundtrack I highly recommend the film. It was the first time I have seen it and it was really well done. It was very surreal and artistic.”

The performance brought out a wide variety of people who came to enjoy the film and performance. Young and old alike, everyone found something enjoyable about the performance.
Because the ensemble and film were playing simultaneously, it was at times difficult to decide what to watch. By paying complete attention to the film, the viewer neglected the amazing talent of the musicians and singers; by paying attention to the beauty of the music, Cocteau’s film was overshadowed.

This unique entertainment experience intrigued Roberta Wolfson, a UCSB graduate student in the English department. She feels that the mix between film and live music created a new, enriching experience.

“I think [this] is a good way to seek out entertainment,” Wolfson said. “We watch television shows, we go to the movie theater, we might go to the bars. This was a new kind of experience; the integration of music and film isn’t something we would normally watch because it’s not on television or easily accessible. It was really broadening.”

A version of this story appeared on page 8 of Thursday, May 8, 2014′s print edition of the Daily Nexus.