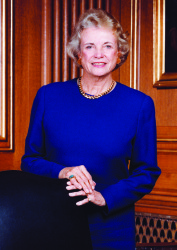 O’Connor served on the Supreme Court from 1981 to 2006 and was the first female to hold a position on the bench. In her talk, she will discuss a range of topics including iCivics, a nonprofit organization she founded after stepping down from the bench to improve the quality of civics education in high schools across the country using the Internet. O’Connor’s talk is expected to last about 15 minutes and will be followed by a 40-minute open Q&A session with the audience.

“What she’s trying to do with iCivics and what the board is doing is taking modern technologies and putting them together with civic education to see if that can rejuvenate a desire for, and also increase the value of, civic education for young people,” Coleman-Moore said.

The world of policy-making and civic life can be intimidating to some, according to Coleman-Moore, who said O’Connor’s talk will be engage attendees by presenting these topics as interesting, accessible and learnable.

“Hopefully it will get people excited about their involvement and investment in public policy and participation in civic life,” Coleman-Moore said. “I think for a lot of people it seems like a confounding task. Like, it’s something beyond or out of their reach, but really it’s just something that we can all participate in.”

According to J. Theodore Anagnoson, a visiting professor in the Dept. of Political Science, O’Connor played a pivotal role during her time on the court by bringing her experience of holding elected office in the Arizona State Senate to the bench.

“She brought some unique qualifications to the court; in addition to being the first female member of the court, most importantly she had actually run for office,” Anagnoson said in an email. “The present court has become quite narrow and homogeneous.”

Anagnoson also said having more justices with experience in elected office, such as O’Connor, would improve the court’s decision-making on certain issues.

“It would be good if the members of the court had actually run for office; perhaps, we would not have such narrow decisions on the role of money in elections as the Citizens United case and others,” Anagnoson said in an email.